This Is How to Achieve Progress With Iran 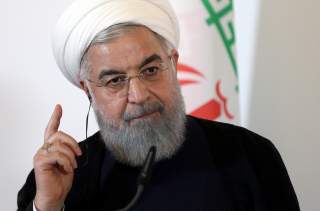 Amitai Etzioni, writing in 2011, blamed diminishing U.S. influence in the Middle East on “reduced U.S. involvement” in the region and “Iran’s expansionist policies.” But the one conspicuous reduction in U.S. involvement at the time was evacuation of U.S. forces from Iraq after eight and a half years of warfare there. And it was the U.S.-launched war in Iraq, more than any other development in the Middle East during the intervening fifteen years, that expanded Iranian influence. If that influence is the main worry, then U.S. military expeditions clearly are not the way to curb it.

Etzioni’s more recent warning that the “Shia alliance” would “likely dominate the region, further enabling the area to serve as an incubator for transnational terrorism” is curious given the preponderance of Sunnis over Shias, as well as Arabs over Persians, in the Middle East. Besides, transnational terrorism over the past twenty-five years has been far more a problem coming from the Sunni side of the Sunni-Shia divide, with its most important incubator being the extremism and intolerance of Saudi Wahhabism.

Etzioni suggests that any lessening of a U.S. role of “strategic protector” of certain regional states would diminish the standing of the United States as a global leader and lead others to “tilt toward China and Russia.” But historically this is not the way governments tend to assess the priorities, commitments and credibility of other states. Worldwide confidence in the United States does not depend on its immersion in local rivalries in which it has less of a stake than the locals do, especially where no NATO-like treaty obligation is involved. Moreover, many states shape their relations with Beijing and Moscow for a variety of reasons that have little or nothing to do with U.S. policy. The Israeli government of Benjamin Netanyahu enjoys unquestioned support from the Trump administration, but Netanyahu still travels frequently to Moscow to coordinate policy with Vladimir Putin on Syria and other matters important to Israel.

Etzioni rightly rejects the option of fighting proxy wars and presents as his preferred option direct confrontation with Iran, through sanctions insofar as they work and otherwise through military intervention. This essentially describes the Trump administration’s current policy on Iran. Although it is reasonable to argue that the policy needs time to work, the early returns are not encouraging. To the extent that political winds in Tehran have shifted since the implementation of Trump’s hardline approach, that shift has been in the direction of Iranian hardliners, largely because Trump’s reneging on the Joint Comprehensive Plan of Action (JCPOA), the agreement that closed all possible paths to an Iranian nuclear weapon, has discredited more pragmatic Iranian elements that favored engagement with the United States. The economic pain that U.S. sanctions have imposed on ordinary Iranians has not translated into decisive political pressure on Iranian leaders, who are able to blame, with more credibility than before, that pain on the United States.

Missing is a fourth strategic option, which is to engage Iran and to use negotiation to pursue U.S. objectives. Although sanctions were part of the motivation for Iran to negotiate what became the JCPOA, sanctions were not the whole story. A nothing-but-pressure approach was tried for years, with ever more sanctions being imposed. The Iranian response was to spin more centrifuges and to enrich more uranium. This cycle stopped only when the United States not only was willing to negotiate but also dropped its unfeasible demand for zero enrichment, leading to a detailed agreement that would ensure that the Iranian nuclear program stayed peaceful.

Etzioni argues that Iran would be highly responsive to a threat of military force from the United States and points out how much Iranians bemoan their heavy losses in the Iran-Iraq War in the 1980s. Iranians are indeed conscious of the costs of war, and their leaders do not seek a war today.

Shunning war in the abstract, however, is different from bowing to another state’s demands to avoid threatened attack. For all nations except the weakest and meekest, there are some matters so important to be worth the risk of being attacked. In short, specific issues matter. It is not supportable to say simply that Iran bows to threatened force.

Although possibly events next door in Iraq had something to do with the timing of Tehran’s offer in 2003 that the Bush administration rebuffed, the nuclear program that Iran was putting on the table was far less advanced than it would become later. Tehran was willing in 2003 to negotiate that program down to a level lower than what they agreed to in the JCPOA, or would agree to today, because there was much less to give up. After that, Iran’s nuclear program grew physically and in popular support. Sword-brandishing by the United States will not induce the Iranians to give it up completely.

The proud Iranian nation is no more inclined than others to fold rather than fight in response to armed threats from foreigners. Events of the past fifteen years do not support Etzioni’s claim that a credible threat of a military strike is most likely to make Iran want to negotiate. What Iran halted in 2003 was work on the design and development of nuclear weapons—and it has stayed halted ever since. It never halted its larger nuclear program and especially the enrichment of uranium. Iran continued to expand its capacity for enrichment until the first preliminary agreement that emerged in 2013 from the negotiations that would culminate in the JCPOA. The Obama administration, which entered office in 2009, was even less inclined than the bogged-down-in-Iraq Bush administration to center its policy toward Iran on threats of military attack. What made the difference—and broke the cycle of ever-increasing sanctions leading only to ever-increasing uranium enrichment—was U.S. willingness to engage in true give-and-take to negotiate a workable agreement rather than merely insisting that Iran bow to maximal U.S. demands.

A critical consideration is how nuclear weapons are the ultimate deterrent against attack by a militarily superior foreign power. Iranian leaders have taken careful notice of the different fates of Libya’s Muammar el-Qaddafi, who gave up his unconventional weapons, and North Korea’s Kim Jong-un, who has not. Nothing is more likely to sway internal debates in Tehran in favor of hardliners who would like to reinstate a nuclear-weapons program than a heightened threat of foreign-military attack. Deterrence works, and the more threatening the environment, the more essential a nuclear deterrent will appear.

Etzioni lucidly explains why an aspiration for regime change in Iran, as a centerpiece of U.S. policy, is folly. It is fair to ask, however, how much difference there really would be between what he envisions and a policy of using military force to achieve regime change. How exactly is the behavior-change-in-response-to-military-attack business supposed to work, if threats alone prove insufficient—as they likely will—and if we are trying to stay below the level of a war for regime change? Do we, say, bombard Abadan until Iran stops aiding Lebanese Hezbollah? (And how would the Iranians prove a negative and demonstrate that they have stopped?) Not only is there no apparent practical scenario, but the whole idea runs contrary to the way Iran and most other nations respond to armed attack on their homelands.

Herein lies one of the most relevant lessons from the Iran-Iraq War. Two years into the war, the aggressor Saddam Hussein offered a cease-fire with withdrawal of all Iraqi forces from Iranian territory. The Iranian regime—despite the huge costs Iran already had sustained—refused, and the war dragged on for another six years.