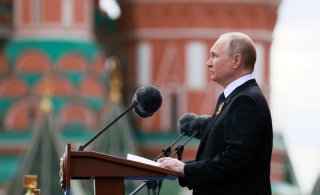 The response of the U.S.-led West to Russian aggression in Ukraine has been impressive and contrary to what almost certainly were Russian president Vladimir Putin’s expectations. But that response has quickly expanded beyond the immediate military contest in Ukraine into a broader and longer-lasting conflict with Russia.

Such expansion especially characterizes the declared U.S. objective not just to end the aggression in Ukraine but more generally to “weaken” Russia. That statement of objectives presumably reflects a deliberate foreign policy decision and is not just a gaffe like President Joe Biden’s unscripted comment that Putin cannot be allowed to remain in power. Declaring as a goal the weakening of Russia has two major problems. It plays into Putin’s propaganda that what the West is doing is not just a response to the war in Ukraine but rather reflects a broader threat to Russia. The declaration also makes it harder to reach any settlement to end the current war, by understandably reducing Russia’s confidence that it would get a meaningful break from Western sanctions and ostracism no matter what it does in Ukraine.

The United States is in effect declaring a new Cold War with Russia. To point this out is not to apportion blame in any specific way between East and West. The main responsibility for the ill turn in international affairs in 2022 lies with Putin, just as it is appropriate to blame actions in the late 1940s by Joseph Stalin and the USSR, including the subjugation of Eastern Europe and blockade of Berlin, for getting the original Cold War under way. But in the current instance the United States had another option, which was to define, in carefully limited terms, its concern as the brutal war in Ukraine and its objective as ending what Russia is doing there.

For the near future, ending the Ukraine war must be the priority. Even without expansive rhetoric, that task will be difficult. It will be hard to find a formula that satisfies the minimum requirements of each party involved. Failure to find such a formula, besides extending the suffering of the Ukrainian people, would further entrench a new Cold War with Russia as a dominant feature of international relations for years to come. That would be true if either the current level of shooting in Ukraine continues or that war settles into a frozen conflict with no understanding reached regarding territory that Russia has seized.

One has to wonder how much thought in official circles has gone into where a new Cold War would be headed and how it would end. Some may be content to wage such a conflict indefinitely, just as there seemed to be such people in the original Cold War. This was one distinction that can be drawn between Ronald Reagan, who envisioned an end to the first Cold War and tried to bring that end closer, and some in his administration who appeared content to be Cold Warriors forever.

A new Cold War with Russia would be very much contrary to U.S. interests and to international security generally. It would have adverse implications regarding military budgets, the continual risk of crises escalating into shooting wars, and the impeding of action on global problems of common concern, among other things.

It is useful to recall thoughts of the guru of containment at the outset of the original Cold War, George Kennan. Kennan preached patience in waging that Cold War, but he definitely saw an end to it. In his “X article” of 1947, he mentioned a time frame of ten to fifteen years. It turned out to be more like forty, but the end was a vindication of Kennan’s analysis that Soviet communism contained the seeds of its own destruction and would eventually collapse from internal weakness.

An optimistic view of current problems is that today’s Russia, sometimes demeaned as a gas station with nukes, also has serious internal weaknesses, some of which parallel the weaknesses of the USSR. But the original Cold War had a distinct end that cannot and will not be duplicated with a new Cold War. The original version ended with collapse of the appeal and influence of Marxist-Leninist ideology, the stunningly swift collapse of communist rule in Eastern Europe, and finally the collapse of the USSR itself, with that final chapter written by President Boris Yeltsin of the Russian Federation.

Now it is Yeltsin’s one-time protégé and current president of the Russian Federation, Vladimir Putin, who is the main problem. Any replacement of Putin, even under the more optimistic regime-change scenarios, likely would be the work of the Russian security services and/or military and could result in a regime no better and possibly even worse than Putin. Stalin was as brutal and absolute a ruler as anyone, but his death in 1953 did not end the first Cold War.

Kennan explicitly distinguished the Soviet regime with which he was concerned from “individual aggressive leaders like Napoleon and Hitler.” He saw some advantages and disadvantages in dealing with each type of foe, but he wrote that the individual aggressive leaders were harder to counter than the Soviet regime insofar as such leaders tend to be “less sensitive to contrary force,” less likely to yield in diplomacy when such force “is felt to be too strong,” and less “rational in the logic and rhetoric of power.” To the extent this analysis is valid and applicable to an aggressive Putin, it lowers the basis for optimism about what the application of contrary force in Ukraine will do either for Putin’s policies there or for his rule generally.

Another difference from the earlier Cold War that bodes unfavorably for Western prospects for “winning” a new one concerns the power that at least until this year had been mentioned more often as the arch-foe in a new Cold War: China. During most of the U.S.-Soviet Cold War, China was the communist poor relation whose own relationship with the USSR got bad enough to spawn a border war between the two. Now China is an economic—and increasingly, military—superpower that is providing strategic depth to Putin’s Russia.

Kennan identified another critical ingredient for the United States and the West to prevail in his Cold War, which was how well the United States handled its own internal affairs. This was a question, wrote Kennan, of “the degree to which the United States can create among the peoples of the world generally the impression of a country which knows what it wants, which is coping successfully with the problems of its internal life and with the responsibilities of a World Power, and which has a spiritual vitality capable of holding its own among the major ideological currents of the time.” Any “exhibitions of indecision, disunity and internal disintegration within this country” would be a boost to the communist adversary.

Kennan was writing in an era of extraordinarily effective bipartisan cooperation in U.S. foreign policy, which had underlain victory in World War II and creation of the United Nations and was continuing into the first years of the original Cold War. The preeminent foreign policy voice in the Republican Party, Senator Arthur Vandenberg, worked in close cooperation with the Truman administration to make possible aid to counter communist insurgencies in Greece and Turkey, establishment of the Marshall Plan, and creation of the North Atlantic Treaty Organization. Kennan had good reason to be optimistic back then about the ability of the United States to show the qualities that he considered essential to winning the global contest with the USSR.

The contrast with today could hardly be greater. Partisanship in the United States has overridden major aspects of foreign policy as much as it has overridden so much else. American democracy itself is on the brink of failure. The United States has gone through four years of presidential sycophancy to Putin, in which it was not beyond the incumbent in the White House to withhold military assistance to Ukraine in an effort to dig up dirt on a domestic political opponent.

A new Cold War with Russia does not bode as well as the previous one. It will not end victoriously with a “unipolar moment.” It might not end at all.