How Foreigners Really Regard U.S. Power 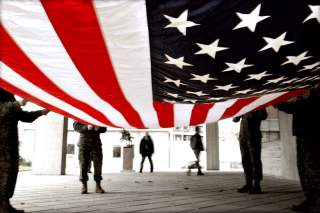 Americans in general have mistaken beliefs about how foreigners view the United States. The misbeliefs stem in large part from circumstances and experiences of the entire American nation. But when it comes to shorter term beliefs about the current standing of the United States in the world, how incumbent American leaders are viewed abroad, and how recent U.S. policies are viewed, a couple of other factors that are infused with partisan politics account for most of the mistaken beliefs among Americans.

One such factor is the drumbeat repetition of certain themes that are invoked so often that they come to acquire the status of conventional wisdom and to be believed not only by much of the public that is exposed to them so often but also by those who, whatever their political motives in first invoking the themes, come to believe them as well. Such a theme has been the notion that the power of, and respect for, the United States has declined in recent years and that the incumbent U.S. administration's “retreat” from the world has much to do with this.

Another factor is selective attention to the statements and reactions of a few foreign governments whose complaints say more about their own interests and objectives than about the trajectory of the United States. In recent years such attention has been given particularly to the complaints of Persian Gulf Arab states that naturally want the United States to take their side in ethnically and religiously stoked local competitions to which they are parties.

Fortunately there are more direct and reliable indicators of foreign views of the United States, U.S. leaders, and U.S. policies. The Pew polling organization has provided some of the most comprehensive data on the subject. A just-released survey by Pew of 15 foreign countries does not support the notion of America's standing in the world having been diminished. When asked whether the United States plays a less, more, or equally powerful and important role as a world leader today compared with the role it was playing ten years ago, the results were a wash. Japan was the only country where a majority thinks the United States plays a less important and powerful role than a decade ago—offset by India, where a majority thinks the United States has become more important and powerful. Results in the other countries were mixed. Americans—exposed to all that conventional wisdom in the rhetoric—are shown in other Pew polls to be more likely than foreigners to believe that the United States is playing a less important role in the world than before.

With regard to the economy, the general perception overseas is that U.S. power is rising. This is particularly true in the five European countries surveyed. As recently as four years ago, when respondents in those countries were asked to name the world's leading economic power, 57 percent said China and 28 percent said the United States. Today the result is 40 percent to 35 percent in favor of the United States.

The United States certainly has serious image problems in much of the world, including Middle Eastern nations that were not part of this most recent survey. The reasons for the negative views have been unpacked in some earlier surveys by Pew and others. Those surveys do not support the idea, so prevalent in much of the domestic rhetoric as well as some of the complaints from some foreign regimes such as the Gulf Arabs, that what is found wanting in the United States is insufficient assertiveness and willingness to use force. To the contrary, such polls have found substantial proportions of foreign publics seeing the United States as a threat. The use of lethal drone strikes, the subject of a pre-holiday release by the White House that is sure to raise more questions than it answers, has been the subject of strongly negative views among foreign publics, according to Pew's polling.

The most recent Pew survey shows foreign publics giving high marks to President Obama—a result directly inconsistent with the idea of an Obama “retreat” from the world being responsible for lowered respect for the United States. When asked whether the respondent has confidence in Mr. Obama “to do the right thing in world affairs.” a majority in all but one of the 15 countries surveyed (the exception being Greece) said yes. A similar question was asked about Angela Merkel, and President Obama got higher marks than the German chancellor in every one of the 15 countries. Mr. Obama also bested Russian President Vladimir Putin in every country except China and Greece (the margin being only one percent in China, where Mr. Obama's stock has risen among the Chinese people during his second term).

It remains to be seen what sort of results future polls will yield about foreign views of the next U.S. president, but Pew has gotten a head start of sorts in a companion poll by asking respondents in ten European countries about the two presumptive presidential nominees, using the same question about whether the respondent has confidence in the leader to do the right thing regarding world affairs. Hillary Clinton gets fairly good marks but not as good as Obama: for Obama the composite numbers are 77 percent confidence and 22 percent no confidence; for Clinton they are 59 percent confidence and 27 percent no confidence. The views of the Europeans about Donald Trump are a much different story: nine percent have confidence, and 85 percent have no confidence, that he will do the right thing in world affairs. It looks like Mr. Obama's comment a few weeks ago about how foreign leaders are “rattled” by the rise of Trump applies in spades to foreign publics.

Image: An American flag being folded. Photo by Vince Alongi, CC BY 2.0.