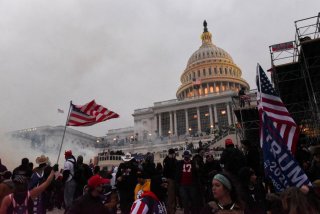 The House of Representatives’ January 6 investigating committee is conveying a cogent and important message, but columnist David Brooks, in criticizing the committee’s focus, has a valid point. The “core problem,” says Brooks, is not the details of who said what to whom on January 6 of 2021 but instead “that there are millions of Americans who have three convictions: that the election was stolen, that violence is justified in order to rectify it and that the rules and norms that hold our society together don’t matter.” Brooks errs in not recognizing the necessity of conveying clearly and authoritatively, as the House committee is endeavoring to do, the ugly story of the attempt to overturn the 2020 election. And solving the larger problem that Brooks identifies is beyond the ability of this one congressional committee. But he is right in characterizing the nature of that larger problem.

The mistaken belief among millions of Americans about the outcome of the 2020 election illustrates how—to paraphrase an apothegm often mistakenly attributed to Abraham Lincoln—it is possible to fool enough of the people enough of the time to cause an awful lot of damage to the nation. The sad fact is that if leaders with a national following are determined to convey a falsehood, they are able to get a large proportion of the population to believe it. A poll earlier this year found that, despite the repeated failures of Donald Trump’s advocates to come up with any evidence of significant election fraud, and their dozens of failures in courts of law to make a case about supposed fraud, only 55 percent of respondents accepted the fact of Joe Biden’s legitimate victory and 26 percent explicitly denied it.

If this kind of widespread misbelief can persist even on a domestic topic about which there are easily available sources of sound information, it is even easier to instill misbeliefs on foreign matters that are farther removed from Americans’ daily lives. An example comes from the biggest U.S. foreign policy blunder in recent decades: the launching of an offensive war against Iraq in 2003. The makers of that war promoted a misbelief that an “alliance” existed between the Iraqi regime of Saddam Hussein and the perpetrator of the 9/11 terrorist attacks, Al Qaeda. The notion of such an alliance was fabricated almost entirely out of thin air. The notion did not come from the U.S. intelligence community, and promoters of the war tried hard to discredit the community’s contrary judgments on this subject. The notion did not even make sense on the face of it, given that Saddam’s regime was part of the very Middle Eastern power structure that Al Qaeda wanted to overturn.

But the instilling of the misbelief succeeded. The success did not even depend on specific assertions but instead resulted mostly from a rhetorical drumbeat in which the war-promoters kept mentioning “Iraq,” “9/11,” and “Al Qaeda” in the same breath. A poll taken in August 2003, after a year of the drumbeat, showed 69 percent of respondents believing it was at least likely that Saddam had been involved in the 9/11 attacks.

One of the many tragic—and in this instance ironic—consequences of the Iraq War was that it spawned an Iraqi offshoot of Al Qaeda that had not existed before the U.S. invasion and that later evolved into the terrorist group known as Islamic State.

Misbeliefs among the American public have been instilled on other foreign policy topics as well. Sometimes there is a partisan motive, such as Trump’s promotion of the notion that Russia’s interference in the 2016 U.S. election on his behalf was a “hoax,” despite the voluminous public record confirming such interference.

Sometimes the partisanship is less pronounced and politicians in both parties are comfortable promoting a misbelief. This is true of some aspects of the Israeli-Palestinian conflict, given the political impulse to accept the Israeli version of events. There is, for example, the misbelief—contrary to the actual history of the conflict—that it has always been the Palestinians rather than the Israelis who have rejected opportunities for a peace agreement.

Since the beginning of Russia’s current war against Ukraine, analysis has often noted Russian president Vladimir Putin’s apparent isolation and how his insulation from varied sources of information and advice may help to explain his misjudgments in launching the war. Such analysis probably is valid, but it does not point to a clear line between decisionmaking deficiencies in Russia and those in the United States. There have been problems in this country as well as Russia in speaking truth to power when it is clear what those in power want. And the ability to get large parts of the population to believe a falsehood—with as much success as Putin evidently has had in getting many Russians to believe that the war in Ukraine is all about fighting Nazis—negates what otherwise would have been an advantage for a democracy over an autocratic system such as Russia, regarding the ability to check or constrain bad decisions by those in power.

Brooks correctly identifies major problems but does not suggest solutions, which is understandable given that solutions would have to reach far beyond any specific subject such as an attempt to negate a free election. (This is true of the attitudinal problems Brooks mentions regarding violence and societal norms, as well as the present topic, which is factual misbeliefs). No matter how powerful and carefully crafted the January 6 committee’s presentations are, they are unlikely to sway the portion of the population that has not accepted the truth. Most of those in that portion who had their televisions on last Thursday evening probably were watching Tucker Carlson and Sean Hannity.

Ultimate solutions would need somehow to inculcate critical thinking skills in citizens, to better enable them to distinguish truth from what former Attorney General William Barr, in testimony about the election fraud claims, characterized as “bulls--t.” The immediate top priority must be to save American democracy from more coup attempts. But even if this democracy is saved, it will face future issues, foreign at least as much as domestic, in which avoidance of costly misadventures will depend partly on avoidance of widespread misbeliefs among the citizenry, often in the face of political leaders actively promoting the misbeliefs. Such avoidance will depend in turn on whether the learning that citizens received in high school and elsewhere has given them the ability to distinguish facts from bulls--t.