How the Trump Administration Is Pressuring Palestine 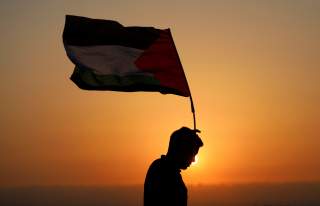 This month marks anniversaries of two major agreements, signed at the White House, that appeared to be major steps toward a comprehensive Arab-Israeli peace but never produced such a peace. On September 17, 1978, Israeli prime minister Menachem Begin and Egyptian president Anwar Sadat concluded an accord, negotiated at Camp David and mediated by President Jimmy Carter, that established principles for an Egyptian-Israeli peace treaty and for starting a process to lead to Palestinian self-determination. On September 13, 1993, Israeli prime minister Yitzhak Rabin and Palestine Liberation Organization Chairman Yasser Arafat shook hands on the Oslo I accord, which had been negotiated under Norwegian auspices and established what became known as the Palestinian Authority. The key provisions of both agreements were supposed to be temporary, but follow-on agreements for lasting arrangements that would assure both Israeli security and Palestinian self-determination never happened. The stronger side—the side with the land and the guns—was comfortable with the status quo, and the agreements made that side even more comfortable. What was supposed to be temporary became permanent.

Two wars provided the background to the Camp David Accords. The Six-Day War of 1967, which Israel initiated, resulted in sweeping Israeli conquests, including the Egyptian Sinai. The Yom Kippur War of 1973, initiated by Egypt, failed to win back the lost territory by force but was a respectable enough showing by the Egyptian army to make possible Sadat’s later peace initiative and historic trip to Jerusalem.

The second part of the Camp David Accords, which laid out principles for an Egyptian-Israeli treaty, gave Begin what he wanted: a separate peace with the largest Arab state, even while the Palestinian question and all other Arab-Israeli issues remained unresolved. It was a separate peace for which Sadat would pay dearly, first in ostracism of his country from its Arab brethren and later with his own life.

The first part of the Accords recognized the “legitimate rights of the Palestinian people” and talked about a transitional arrangement, to last five years, leading to full autonomy for the Palestinians. This part of the agreement was left very vague. Begin did his utmost to keep it as vague as possible, as well as unenforceable. He did want the adjective “full” placed before “autonomy,” but only to imply that an arrangement less than statehood was all the Palestinians would ever get. There is no reason to believe Begin saw this part of the Camp David Accords as anything other than a rhetorical gesture he needed to make to get the peace treaty with Egypt. Despite the unpopularity of the Accords in the Arab world for falling so far short of Palestinian self-determination, however, it did demonstrate that negotiations with Israel were possible, and in so doing they made Oslo possible years later.

Oslo was a breakthrough of mutual recognition—of the PLO by Israel and of Israel by the Palestinian leadership—and both sides had to swallow hard to get to that handshake on the White House lawn. (Israeli columnist Gideon Levy observes that while Rabin’s anguish was genuine, “There was more Palestinian blood on Rabin’s hands than Jewish blood on Arafat’s hands. If someone had needed to cringe at the Washington ceremony, it was actually the Palestinian leader.”) If there ever was a genuine intent by Israeli leaders to get beyond falsely temporary arrangements and move to a true permanent peace, it was at this moment under Rabin. But Israeli politics have been going in a different direction ever since, beginning with Rabin’s assassination by a Jewish Israeli extremist two years later. Then-opposition politician (and current prime minister) Benjamin Netanyahu was among those whose rhetoric fostered the environment for that murder—a story that Dan Ephron tells in his book about the assassination.

It wasn’t only the larger political tides in Israel that kept the Oslo agreement from producing the peace it was supposed to produce. Just as Camp David—by taking the largest Arab state with the largest army off the battlefield—made an indefinite occupation of Palestinian territories more comfortable for Israelis, so too did Oslo’s creation of the Palestinian Authority. The PA was supposed to have been the kind of transitional apparatus envisioned in the Camp David Accords. It should have gone out of business a couple of decades ago. But for Israel, the PA has functioned conveniently as a kind of auxiliary administration and security force that helps to keep the West Bank under control. It relieves Israel of having to perform directly all the functions of an occupying power, including those that international law requires. So Israeli governments have been happy to keep the PA around indefinitely, no matter how much those governments also use it as a foil and target in rhetoric and no matter how much the PA has understandably become discredited in the eyes of many Palestinians.

Nothing was said in the agreements of either Camp David or Oslo about the construction of Israeli settlements in occupied territory. Levy considers this a “critical mistake” in the Oslo agreements and a “trap” that the Palestinians fell into. The enjoyment of additional living space at the expense of the Palestinians who were already there, backed by the PA’s auxiliary security function helping to keep rejectionist violence under control, has made it all the more comfortable for many Israelis to continue the supposedly temporary arrangements in perpetuity, and never to define their own country’s final boundaries.

As enough time goes by, the temporary gets treated more and more as permanent. Last year marked fifty years since the beginning of the Israeli occupation. This month marks forty years since Camp David and twenty-five years since Oslo. Entire generations have grown up in the interim. Not only the passage of time but also the Israeli colonization project in the West Bank have made a viable Palestinian state increasingly unfeasible. Israeli leaders—including ministers in Netanyahu’s government, and when he is talking to Israeli audiences, Netanyahu himself—have become quite open and frank that they will never agree to a Palestinian state.

The administration’s most recent moves regarding Palestinian refugees have highlighted how indefinite perpetuation of a temporary arrangement can be part of an effort to take an issue “off the table” in another way. The administration says only those Palestinians originally driven from their homes (during Israel’s founding war seventy years ago or the Six-Day War fifty-one years ago) should count as refugees, and their descendants should not. Contrary to Israeli claims, counting descendants as refugees is standard practice in defining other refugee populations around the world. But if you don’t count them, then just let enough years go by and—bingo—no more refugees, no more refugee issue, and no need to discuss something like “right of return.” Of course, in the real world, neither people nor whole nationalities vanish that way, and neither do their national aspirations and the trouble that ensues when those aspirations are suppressed.

The Trump administration claims that its collective punishment of Palestinians, including its termination of funding for humanitarian assistance and closing of the PLO office in Washington, is intended to induce Palestinians to negotiate. But Palestinian leaders are not refusing to negotiate; they are refusing to do so on terms dictated by the Trump administration, which has so clearly forfeited any claim to be an honest broker, or that are based on their side preemptively conceding on major issues such as the status of Jerusalem.

Amid the years of claims and counterclaims about which side in the Israeli-Palestinian conflict is most responsible for the ostensible goal of Camp David and Oslo never being realized, the question of who most wants to negotiate is rather simple. Look for the side that, in addition to having the power to change things on the ground by itself, has grown comfortable with indefinite perpetuation of a supposedly temporary status quo. That’s the side that doesn’t want to negotiate. The side that is suffering most under that status quo and that is powerless to change it by itself is the side that does.

Image: A demonstrator holds a Palestinian flag during a protest against Jewish settlements in the village of Ras Karkar, near Ramallah in the occupied West Bank August 30, 2018. REUTERS/Mohamad Torokma