Intelligence Failure in the Trump Era 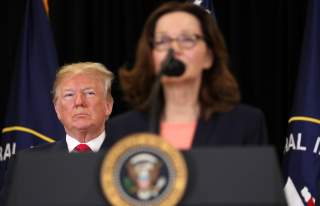 The Trump administration’s tendency to disregard the conclusions of the U.S. intelligence community has become, as the Washington Post’s Greg Miller has reported, something of a habit. Initially, Trump’s shoving aside of the intelligence agencies’ assessments was all about his refusal to acknowledge the role that Russia played in his election victory in 2016. During the subsequent two years, the administration’s rejection of those agencies’ analysis has extended to a variety of important topics, from North Korea and Iran to migrant caravans and murder in Istanbul.

Miller quotes comments of an anonymous U.S. intelligence official about how “there is extraordinary frustration” over how the “time, energy, and resources” devoted to providing accurate intelligence to Trump seems to be all “a waste.” What is proper or improper in policy-intelligence relations is more complicated, however, than simply noting how much the current president either heeds or blows off what intelligence officers tell him.

There is no need to feel sorry for intelligence officers more than other public servants, notwithstanding the aforementioned frustration. In some respects, the intelligence agencies are more insulated from Trump’s excesses than are many other federal departments and agencies. The intelligence agencies’ mission involves providing the best possible information and analysis to inform policy decisions; it does not extend to the policy decisions themselves. The job of intelligence includes leading the policy horse to water and advising whether the water is safe to drink; the job does not include getting the horse to drink it. (This principle is not always observed in public perceptions of how well intelligence has done its job, but that’s a problem with the public perceptions, not with the administration of the day.)

We should feel sorrier for public servants in those parts of the federal government—such as the Environmental Protection Agency or the Consumer Financial Protection Bureau—whose core missions the Trump administration is negating and are led by people appointed to impede those missions. In such places, the government-wide drop in morale under Trump has understandably been especially steep.

For any of several legitimate reasons, foreign and security policy might not take the direction that an intelligence assessment seems to imply. Important foreign policy issues commonly involve multiple U.S. interests and objectives. An assessment on any one question does not speak to all those interests and objectives. Policymakers must choose among competing national priorities and consider where to pay costs and to assume risks. Intelligence cannot make those priority-setting decisions. Makers of foreign policy also must consider resource constraints and domestic support, and not only the situation overseas that the intelligence agencies describe.

A policymaker going against what appears to be the implied direction of intelligence assessments should be honest about the reasons for doing so and should respect the legitimacy of the intelligence agencies’ assessments even if they do not ultimately guide the policy. As Miller observes, Trump doesn’t do that. Instead, he attacks the accuracy of the information those agencies provide. This type of reaction is not unprecedented. It prevailed during the George W. Bush administration’s selling of the invasion of Iraq, when that administration denigrated the intelligence agencies’ (accurate) assessment that the Iraqi regime had nothing to do with the operations of al-Qaeda and promoted an alternative (false) notion of an “alliance” between the regime and the terrorist group.

Another unfortunate tactic much in evidence under Trump is to demand an extreme and probably unattainable level of “proof” before accepting a reality. The administration has used this tactic in refusing to acknowledge the role of Saudi crown prince Mohammed bin Salman in the murder of journalist Jamal Khashoggi. Secretary of Defense James Mattis and Secretary of State Mike Pompeo talk about the absence of a “smoking gun” or “direct evidence” implicating the crown prince. Such a tactic, if applied to foreign policy generally, would be a recipe for paralysis, because most situations to which foreign policy must respond do not offer smoking-gun type evidence but are no less a reality because of that. Again, there is precedent in the Bush administration’s selling of the Iraq War, when policymakers disregarded probabilities to promote their preferred notions, although in that case the promoted notions more often were that something did occur rather than that it didn’t. Secretary of Defense Donald Rumsfeld preached that “absence of evidence is not evidence of absence,” and Vice President Richard Cheney propounded the “one percent doctrine,” under which we were supposed to treat as a certainty something that was highly unlikely.

Trump’s rejection of reality is nonetheless unprecedented in a couple of respects. One is the sheer scope and magnitude of the lying, with tallies of presidential falsehoods having gone off the charts. Another is Trump’s persistent repetition of lies even after their falsity has been conclusively and publicly demonstrated. Already overworked fact-checkers in the media have had to develop new scoring systems to track this Trumpian habit. The habit resembles nothing in previous American history as much as it resembles the Big Lie technique that totalitarian regimes have perfected. In Trump’s case the idea evidently is that if he repeats a falsehood often enough and long enough, it will replace reality at least in the minds of his cherished political base.

Intelligence agencies are in the truth business, and so it is natural to think of them when contemplating Trump’s war against truth. But the agencies are not central to what is at stake in most of this war. We don’t need intelligence agencies to know how much of this presidency is based on falsehoods, even in foreign affairs. Acknowledging the Saudi crown prince’s role in the Khashoggi murder, for example, depends less on some juicy bit of reporting from an intelligence agency than on an understanding of how the current Saudi regime operates.

Americans certainly should be attuned to misrepresentations of reality that involve misuse of intelligence. Such abuse is most likely to involve cherry-picking, in which a few bits of intelligence reporting are publicly highlighted to make a case while disregarding other information that fully and more accurately portrays reality. Such cherry-picking in the selling of the Iraq War is echoed in much of the Trump administration’s promotion of hostility toward Iran. Pompeo’s most recent statement about Iranian missiles, for example, was a highly selective treatment that left unsaid anything about other missile activity in the region, the threats and aggression to which Iran is responding, and who is and is not respecting obligations in multilateral agreements and United Nations Security Council resolutions.

Yes, it would be better if Trump heeded the intelligence agencies’ assessments more than he does. But defending American democracy in the face of Trump’s war against truth and trying to prevent more such damage to that democracy in the future go beyond the role of those agencies. The defense includes somehow instilling in the general population not only the ability but also the duty to distinguish between truth and lies.

Paul R. Pillar is a contributing editor at the National Interest and the author of  Why America Misunderstands the World .

Image: New CIA Director Gina Haspel speaks as President Donald Trump looks on after Haspel was sworn-in during ceremony at the headquarters of the Central Intelligence Agency in Langley, Virginia, U.S. May 21, 2018. REUTERS/Kevin Lamarque.