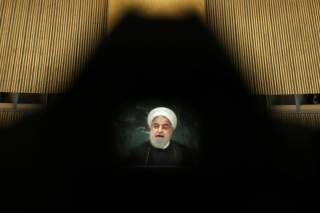 The arrest in Germany earlier this year of an Iranian official for alleged involvement in a plot to attack a meeting in France leaves unanswered questions about how for such a plot may have gotten. But taking the reports at face value, if such an attack had occurred, it too would have been retaliation for violence, including terrorist violence, inflicted against Iranians. The death toll from attacks inside Iran by the Mujahedin-e Khalq—a meeting of which reportedly was the intended target of the plot—number in the thousands, and by some estimates reach five figures.

This past week, Iran again became the victim of mass-casualty terrorism. An attack during a military parade in the southwestern city of Ahvaz killed at least twenty-five people, including civilians, and wounded dozens more. The Trump administration could barely bring itself, before a belated State Department statement, to get away from its posture that Iran should always be considered a problem in terrorism and never a victim. Nikki Haley said Iran should “look in the mirror” for the causes of the attack.

Again, imagine that an equivalent attack occurred in the United States. (Imagine also that an Iranian government response, instead of expressing sympathy for the victims, as Iran did after 9/11, was to say “look in the mirror”.) American public and political demands would require whatever administration was in office to strike out forcefully somewhere, against someone. The United States undoubtedly would use the most modern military hardware to do so.

Iran, too, will try to respond to the Ahvaz attack (responsibility for which currently is unclear), and already has promised to do so. Lacking cruise missiles and modern attack aircraft, Iran will use the means available to it. This likely means methods that, unlike overt military attacks, would meet the terrorism definition. But this will still be a response to someone else’s violence, not a rogue state looking for trouble.

The Bush administration’s misuse of the post–9/11 fear of terrorism to drum up support for the Iraq War carries a final lesson about the costs and counterproductivity of such misuse. Before the war there was no alliance between Iraq and Al Qaeda, and the group Al Qaeda in Iraq did not exist. As a direct result of the U.S. invasion and subsequent occupation and turmoil, Al Qaeda in Iraq was born. After a change in name and leadership, it became what we know as ISIS.

Image: Iran's President Hassan Rouhani is seen through a camera eyepiece as he addresses the 73rd session of the United Nations General Assembly at U.N. headquarters in New York, U.S., September 25, 2018. REUTERS/Carlo Allegri