Iran, Russia, Gaza: Why They Need to Be Considered Together 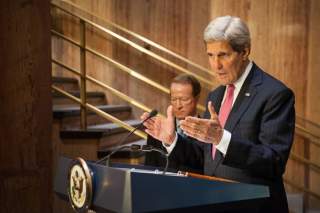 In the face of intense, high-profile, and especially fast-moving problems, the decision-making apparatus for foreign policy and national security has a narrow attention span. Limited policy bandwidth becomes even more of a problem than it normally is. The weighing of relevant considerations is subjected to shortcuts. The most difficult problems tend to be viewed in isolation. Just getting through the day or the week without making such a problem even more difficult becomes de facto a national objective.

But even reasonably careful attention to each serious problem, considered more or less separately, is not good enough. Different problems need to be considered together. This does not mean the kind of ethereally broad, grandly synoptic approach that is the subject of so much armchair strategizing and kibitzing. It instead means a mid-range awareness of how the way we handle one current, concrete problem might affect the nature of some other current, concrete problem.

Right now the United States faces in particular three big, important, fast-moving challenges, each of them worthy of whatever front-page space they get. One is the negotiation of an agreement, or likely extension of negotiations, on Iran's nuclear program as the previously established target date for completion of an agreement arrives this weekend. The second is a new negative turn in U.S. relations with Russia, with the imposition of added sanctions against Russia—a situation that would have been a significant challenge even without the major added complication Thursday of the downing of a Malaysian airliner over the rebellious part of eastern Ukraine. The third is the expansion of Israel's assault against the Gaza Strip, with the aerial bombardment that already had been ongoing being supplemented by a ground offensive. Each of these three situations can complicate the other two.

The most obvious candidate for complication concerns how the downturn in relations with Russia might affect the Iran negotiations. Some earlier worries about whether the Russians would continue to cooperate in its role as a member of the negotiating ensemble known as the P5+1 have not materialized. As Alexei Arbatov's excellent description of Russian interests in Iran points out, Russia does not want to see an Iranian nuclear weapon and in that respect does want to see an agreement that would be the best assurance against the advent of such a weapon. But the anti-Russian sanctions, and possibly any more severe damage to relations stemming from the airliner incident, have changed Moscow's situation and its calculus enough that a continuation of previous Russian behavior cannot be taken for granted. Russian responses can range from greater resistance to the stand that the United States might want to maintain regarding the permitted scale of Iranian uranium enrichment, to larger departures that might amount to Russia making its own separate deal with Iran. None of this need entail an abandonment of the Russian objectives of getting an agreement and not having an Iranian nuclear weapon; there are genuinely held differences of view even within the United States of what constitutes a good agreement and what is the best way to attain it.

The assault on Gaza crisis also can affect the Iranian negotiations, partly because the party conducting the assault also is the principal opponent of any agreement with Iran. Exactly what the effect will be is hard to determine, however. Given the contrived trade-offs that the Netanyahu government often sees in the balance sheet of its relationship with Washington, perhaps U.S. condoning of the assault will imply an understanding that the government of Israel should have that much less latitude in its efforts to sabotage an agreement with Iran. But the effect easily could work the other way. Impunity in getting away with what is happening in Gaza may impart political headiness in Jerusalem and political momentum in Washington that would mean more, not less, Israeli sabotage of an Iran deal. Whatever public distraction and political gain Netanyahu gets at home from the Gaza operation might make it easier for him to brush aside the voices in Israel who realize that an accord limiting Iran's nuclear program would be in Israel's interests and that sour relations with the administration in Washington are not.

An additional, ever-present factor is how the role of the United States as Israel's principal defender and protector against international criticism or condemnation uses up U.S. political and diplomatic capital. The more that Israeli behavior is subject to such criticism, the more U.S. political and diplomatic capital is consumed. That means there is less of it left to spend on other purposes, including holding together a coalition, and holding it together on U.S. terms, in negotiating with Iran. It also means less capital that might be needed to hold the Europeans together in a similar way in confronting Russia over Ukraine. This factor is likely to become increasing important to the extent that a continued Israeli operation in Gaza incurs moral repugnance among populations in European countries whose governments have not as yet clearly condemned the operation.

There are some symmetries among these three challenges, although not necessarily involving all three at once. The imposition of damaging sanctions on Russia is almost an open invitation for Moscow to become less cooperative regarding the damaging sanctions that have been imposed, under U.S. leadership, against Iran. The death toll in Gaza, after the opening shots on Thursday of the Israeli ground offensive, stood at 246. Given the history of past Israeli attacks there, especially Operation Cast Lead in 2008-2009, it may take only a couple of more days for the number of dead to match the 298 who perished on the Malaysian airliner.