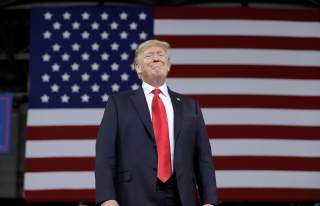 “No nuclear weapons,” declares President Donald Trump, identifying that objective as his top priority regarding Iran. The contradiction with Trump’s own policy toward Iran is jarring. The starting point and a continuing leitmotif of that policy has been the administration’s reneging on, and effort to destroy, the Joint Comprehensive Plan of Action (JCPOA). The multilateral agreement was designed to prevent Iran from developing a nuclear weapon and closed all possible paths that led to the creation of such a weapon. Among several counterproductive aspects of Trump’s Iran policy, this is probably the most glaring one.

Accompanying the administration’s obfuscation of other elements of the current standoff with Iran has been the promotion of the notion that the JCPOA somehow advanced Iran’s nuclear program rather than constrained it. The receptivity for that notion, especially within Trump’s political base, was nurtured by Republican opposition to the JCPOA before Trump entered office. Now the nurturing of that false notion continues with assertions by bellicose supporters of the administration’s path that the JCPOA was “smoothing Iran’s path to a nuclear weapon.” If disposing of fissile material, tearing out enrichment centrifuges, filling nuclear reactors with concrete, and all the other things Iran had to do to fulfill its up-front obligations under the JCPOA constitute smoothing, then one wonders what roughing it would look like.

Public understanding of the JCPOA has suffered from an uninformative discourse, again predating Trump, that has exhibited defensiveness on one side and shameless misrepresentation on the other. Even many defenders of the agreement consider it de rigueur to start any defense by acknowledging that the agreement is “flawed.” That’s a truism. Almost every international agreement is the result of give-and-take in negotiation and thus is “flawed” by definition, with no party getting every part of what it would consider to be a perfect, flawless result.

While the JCPOA has required Iran to do major program-retrenching steps such as gutting nuclear reactors and enrichment cascades, it required nothing from the United States other than the lifting of sanctions whose very purpose was to induce Iran to take the kind of bomb-precluding measures that the JCPOA incorporates. Lifting those sanctions was a net plus, not a minus, for the United States in terms of not only nuclear nonproliferation but also trade, investment, and other economic considerations. Herein lies a legitimate reason, by the way (in addition to the anticipated handling of the issue by Republicans in the Senate) for not making the JCPOA a treaty. The agreement imposed no costs or constraints on Americans, as treaties can do in becoming part of the law of the land. Even without sanctions, no company was required to do any business with Iran if it didn’t want to.

To the extent that continued attacks on the JCPOA by the administration and others have any focus, they most often mention the “sunset clauses,” which allow some of the limits placed on Iran’s program to become relaxed after several years. Misrepresentation is rife here, too. A good example is when the president made the blatantly false assertion, “In seven years, that deal will have expired, and Iran is free to go ahead and create nuclear weapons.” The most important provisions of the JCPOA never expire. One is the basic prohibition on any creation, acquisition, or possession of nuclear weapons by Iran, thus reinforcing Iran’s pre-existing commitments under the Nuclear Nonproliferation Treaty. Another permanent provision is the highly intrusive and comprehensive inspection regime, which is the international community’s best possible assurance of immediately detecting any Iranian straying from its commitments.

Additionally, those who are dissatisfied with the sunset clauses often fail to compare them to the alternative. If you don’t want Iran to produce larger quantities of low-enriched uranium six or eight or ten years from now, then how would you like to see Iran being able to do that right away? That was the alternative before the JCPOA was negotiated, back in the days when increased international pressure in the form of economic sanctions was met by the Iranians spinning increased numbers of centrifuges and producing increased amounts of fissile material, to an extent well beyond what would become the limits in the JCPOA. Now that same alternative is re-emerging as Iran responds to the Trump administration’s dismantling of the JCPOA by preparing to pass those same limits.

The current imbroglio results from a Trumpian foreign policy that is largely about domestic politics and the rhetoric of domestic politics; a policy that lacks any serious plan or strategy. Trump got on his current course regarding Iran for two reasons. One was to oppose whatever Barack Obama did. Because the JCPOA was perhaps Obama’s most significant foreign-policy achievement, it was automatically a target for destruction. The second reason was that Trump, as Fareed Zakaria has observed, has subcontracted U.S. Middle East policy to Israel, Saudi Arabia, and possibly even the United Arab Emirates. The subcontractors have their own reasons for wanting to keep Iran permanently ostracized, sanctioned, weakened, and loathed, and to prevent the United States from doing any sort of business with Tehran. Both of these drivers of the policy ultimately revolve, certainly for Trump, around domestic politics. Excoriating the JCPOA is the foreign-policy equivalent of excoriating the Affordable Care Act in domestic policy. The subcontracting of regional policy to Iran’s regional rivals is intimately related to the money dimension and other dimensions of domestic politics.

Now Trump is in a box. He doesn’t seek a war, but he is in a position that favors those of his supporters and subordinates who do seek a war. Unfortunately, he doesn’t know how to get out of the box.

The JCPOA was the product of exhaustive negotiations, punctuated by shouting matches between Secretary of State John Kerry and Iranian foreign minister Javad Zarif. It represents the most that could have been squeezed out of the bargaining space, given what each side considered its key objectives—even when the United States was backed by an international consensus, which no longer backs it. As far as nuclear issues are concerned, any exit from the box will have to involve either the JCPOA or something that looks very much like the JCPOA.

Of course, Donald Trump would never acknowledge that. In fact, Trump’s demonstrated technique of describing minor changes as major breakthroughs—such as by replacing the North American Free Trade Agreement with a renamed and slightly modified version of the free-trade agreement and then claiming it as a major achievement—may suggest a way out. Trump could claim a renamed and slightly modified version of the JCPOA as an achievement that is far, far better than anything Obama did. Getting to that point still would mean surmounting major obstacles, including the Trump administration’s enormous credibility deficit and continued fears in Tehran about being seen to negotiate from weakness.

If Trump had never embarked on his current course and instead had lived up to U.S. obligations under the JCPOA, then Iran also would continue to observe its own obligations under the agreement. There would be no talk about exceeding limits on enriched uranium. Iran would have no reason to seek military confrontation with a vastly superior military power. And if allowed to export oil as promised under the agreement, Iran would have no reason to risk disrupting the oil trade, such as by sabotaging tankers. Iran’s role in the current standoff is entirely a reaction to what the Trump administration is doing to Iran.

There may be a certain symmetry in how Trump’s distinctive brand of braggadocio—of describing minor measures as major achievements—offers what may be the only faint hope of getting him get out of a crisis that is wholly of his own making.