Iraq and Iran, Sharing a Neighborhood 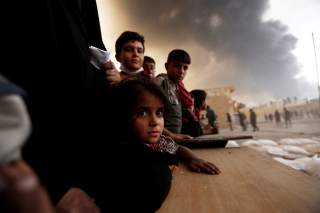 In Iraq, as in Syria, the imminent extinguishing of the mini-state of the so-called Islamic State (IS) is raising the question of whether U.S. objectives in Iraq really are focused on countering IS or will balloon into some other reason to keep American forces there indefinitely.  The most common rationale voiced by those arguing for an indefinite stay is to counter Iranian influence.  The rationale echoes larger alarms, being sounded by the Trump administration as well as others, about an Iran that supposedly is on the march and threatening to bring most of the Middle East under its sway.  The alarms are filled with unsupported zero-sum assumptions about what any Iranian action or influence means for U.S. interests.

Those tempted to succumb to the alarms as they apply to Iraq should bear in mind two important realities about the Iraqi-Iranian relationship.

The first is that the biggest boost to Iranian influence in Iraq was the U.S. invasion of March 2003.  The net effect of the whole costly, unpleasant history of the United States in Iraq—including the initial conquest, later surge, and all the ups and downs of occupation—as far as Iranian influence is concerned is to have made that influence much greater than it ever was while Saddam Hussein was still ruling Iraq.  If Iranian influence were the overriding worry about the Middle East that the rhetoric of the Trump administration makes it out to be, this record strongly suggests that an unending U.S. military expedition would not be a smart way to assuage that worry.

The second key reality is that Iraq and Iran, for reasons of geographic proximity and a bloody history, are necessarily huge factors in each other's security.  That fact cannot be shoved aside by outside actors talking about filling vacuums, pursuing their own self-defined rivalries, or imposing zero-sum assumptions that do not correspond to ground truth in the Persian Gulf region.

The extremely costly Iran-Iraq War, begun by Iraq and fought from 1980 to 1988, is the most prominent part of the bloody history and a formative experience for leaders in both countries.  We lack accurate figures on the war’s casualties, but deaths numbered in the hundreds of thousands for each country.  Using the mid-range of estimates of those killed in the war, the combined death toll was probably somewhere around three-quarters of a million.  The war was the deadliest conflict in the Middle East over the past half century.

Against that historical backdrop, it behooves the leaders of both Iraq and Iran to keep their relationship on an even keel.  Although the two neighbors still have differing interests, it is in the larger security interest of each to have cordiality prevail over conflict in their bilateral relationship.  The governments in both Baghdad and Tehran appear to realize that.

It helps that the two countries have, along with their differing interests, some important parallel interests.  Chief among those right now are their interests in quashing IS and in not letting Kurdish separatism tear pieces out of each country’s sovereign territory.  These interests also align with declared U.S. objectives about fighting IS and upholding the territorial integrity of Iraq, although this fact often seems to get overlooked in the United States amid the obsession with opposing Iran and confronting it everywhere about everything.

Many countries, including the United States, share a general interest in peace and stability in the Middle East—for numerous reasons, including how the lack of peace and stability encourages the sorts of violent extremism that can have consequences beyond the region.  It follows that having more cordiality than conflict in the Iraq-Iran relationship, which was so disastrously explosive in the recent past, also is in the general interest.

That peace and stability inside Iraq is in Iran’s interest as much as in other countries’ interests gets overlooked amid obsession-related caricatures of Iran that portray it as fomenting instability wherever and whenever it can.  Persistent instability in a country with which Iran shares a border of more than 900 miles is not in Iran’s interest.  It is ironic that this fact seems hard to accept by those who habitually use the term “spread of instability” in opining about security issues in the Middle East.

Iranian leaders also are smart enough, and informed enough about Iraqi affairs, to realize how destabilizing would be narrowly minded sectarian favoritism and how easy it would be to overplay their own hand.  However empathetic the Iranians are to their Shia co-religionists, they realize that Sunni-bashing policies do not constitute a formula for stability on their eastern border.  They also are aware of Iraqi nationalist (and Arab) sensitivities.  They can see such sensitivities even in cleric and militia leader Moqtada al-Sadr, commonly described as a Shia zealot, who recently made friendly visits to Saudi Arabia and the United Arab Emirates, which are among the chief regional rivals of Iran.

Amid these realities, it is jarring and inappropriate for the United States, in acting out its obsession with seeking confrontation with Iran, to lecture the Iraq government about how the Iranian-supported militias need, in the words of Secretary of State Rex Tillerson, “to go home”.  It is not surprising that such preaching raised the dander of the Iraqi government of Prime Minister Haider al-Abadi, which pointed out that the militias in question, although armed and trained in part by Iran, consist of Iraqis. Abadi further stated, in response to this U.S. effort to tell the Iraqis how to organize their internal security efforts, “No side has the right to intervene in Iraq’s affairs or decide what Iraqis should do.”

Abadi later understandably expressed his frustration with the U.S. administration trying to make his country a playing board for Washington’s game of seeking confrontation with Iran.  Abadi said, “We would like to work with you, both of you [meaning the United States and Iran].  But please don’t bring your trouble inside Iraq.  You can sort it anywhere else.”

Iraqis are contemplating not only how the Iranian-backed militias have done much of the heavy lifting in defeating IS in Iraq.  They also can see most recently the constructive behind-the-scenes Iranian role in resolving the standoff with the Kurds over Kirkuk and nearby oilfields in a way that advanced the objective of Iraqi territorial integrity and sovereignty with minimal bloodshed.  Abadi’s own government can rightly claim most of the credit for this result, and the prime minister’s domestic political stock has risen as a result.  But to the extent any outside player played a positive role, that player was Iran.  The United States does not appear to have contributed to the outcome to any comparable degree.

Two basic reasons explain the U.S. obtuseness in failing to recognize and understand the regional geopolitical realities mentioned above.  One is the demonization of Iran and fixation on opposing it everywhere on everything, to the exclusion of attention given to the many other facets of security issues in the Middle East.

The other reason is the chronic difficulty that Americans, relatively secure behind two ocean moats, have had in understanding the security problems, and responses to those problems, of nations without similar geographic blessings.  This was the reason that, during the Cold War, “Finlandization” became a U.S. term of derision aimed at countries that deemed it advisable to observe certain policy limits in order to live peaceably as neighbors of the Soviet Union.  It is today a reason for failing to appreciate fully how Iraqis analyze what is necessary to live peaceably in their own neighborhood.