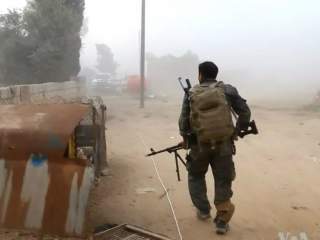 A major deficiency in America's history of involvement with armed conflict overseas has been inattention to whatever would follow defeat of the bête noire of the moment. The outstanding example is, of course, the U.S. invasion of Iraq in 2003, with the promoters of that war being irresponsibly negligent in not seriously considering that the aftermath of deposing the Iraqi regime would be anything other than a stable and democratic polity. A similar deficiency occurred when the United States followed a European lead in deposing Muammar Qadhafi in Libya. When disorder and continued conflict ensue, the wider consequences are invariably bad for U.S. interests and international security. This includes in particular providing fertile ground for extremism and terrorism, as the invasion of Iraq did in giving birth to the group we now know as ISIS.

Much of what applies to the overthrow of regimes applies as well to the defeat of ISIS itself, a non-state actor that has taken control of a chunk of territory and has been trying to function like a state. There are, to be sure, significant differences between true state regimes and ISIS, an ephemeral phenomenon that is especially barbaric and wholly illegitimate and unrecognized. It would be hard to make a good case for a strategy that centers on leaving ISIS in place indefinitely, while a strong case certainly could be made that we would have been better off today if we hadn't gone after a regime such as the one in Iraq. But there are similar issues of what comes afterward.

Those issues are going to have to be confronted soon. ISIS is on the run. In Iraq it has lost nearly half of the territory it had gained in its offensive in 2014, and government forces are in the early stage of a campaign to retake Iraq's second city, Mosul. In Syria the group recently suffered a major defeat in losing Palmyra to government forces, and it has lost additional ground to other opposition militias in the northwest. Meanwhile reports accumulate of the group's mounting financial difficulties and problems in trying to administer its mini-state.

Against the backdrop of these favorable developments is continuing uncertainty regarding the “what comes after” question. The UN-brokered international diplomacy regarding Syria's political future will have much to do with resolving that uncertainty. But while the diplomats are still negotiating, fast-moving events on the ground are forcing the issue. The recent action in and around Palmyra makes it hard to escape the conclusion that the Assad regime will be filling some of the space previously occupied by ISIS. That makes all the more untenable any political formula for Syria that centers around the departure of that regime. Additional setbacks by ISIS in the northwest are adding to the territory on which a variety of contenders in this complicated civil war have their eye.

In Iraq, a similar situation is depicted by Thomas Friedman in a column written during a visit to the north of the country. Friedman quotes the governor of Kirkuk Province as saying, “The problem in Iraq is not ISIS. ISIS is the symptom of mismanagement and sectarianism.” Without further administrative and political changes, “the situation in Iraq could be even worse after” ISIS is defeated. Friedman further explains the reason: “There is simply no consensus here on how power will be shared in the Sunni areas that ISIS has seized. So if one day you hear that we've eliminated the ISIS caliph Abu Bakr al-Baghdadi and lowered the ISIS flag over Mosul, hold your applause.” The competing aspirations of Kurds and Sunni Arabs are the biggest, but not the only, part of the unresolved conflicts involved.

The marked trend against ISIS, under existing policies of the United States and others, is one reason that the repeated calls for a heavier U.S. military involvement to combat ISIS are unwarranted. Other reasons involve the counterproductive aspects of some attempts to apply U.S. military power against extremism, and the quagmire risks of wading more deeply into a war as complicated as the one in Syria. The tone of urgency associated with the calls for escalation also have been based on false assumptions about how events in ISIS's so-called caliphate supposedly relate to international terrorism in the West. There is little evidence of financial or material support, for example, from ISIS central for the recent attacks in Paris and Brussels.

Now yet another reason the calls for U.S. military escalation are unwarranted is that even if such escalation were to hasten the demise of ISIS, such hastening would only bring to the fore more quickly some more fundamental problems. For military events on the ground to outrun progress in resolving conflicts and addressing problems of which, as the Iraqi provincial governor noted, ISIS is a symptom would not constitute an improvement as far as international security is concerned. To the extent that events in Syria and Iraq do have something to do with a threat of terrorism in the West, that threat will depend not so much on how quickly ISIS expires but rather on what is left after its expiration.