Israel Is Not a Liberal Democracy 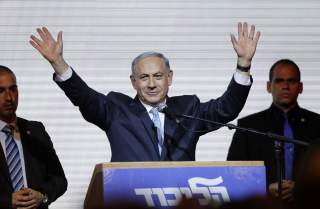 Israeli prime minister Benjamin Netanyahu declared a “defining moment in the annals of Zionism and the annals of the state of Israel” when the Knesset enacted earlier this month a basic law (having constitutional status in Israel) making the right of national self-determination “unique to the Jewish people” and not applicable to all citizens. The law further enshrined religiously based discrimination, including a clause that points to priority for Jewish-only communities by declaring “the development of Jewish settlement as a national value” and promising “to encourage and promote its establishment and consolidation.”

The law has been a subject of much controversy in Israel. It passed the Knesset by the narrow margin of sixty-two to fifty-five. Opponents argue that it constitutes a step away from democracy. But this was one more item on the agenda of the ruling right-wing coalition that, given the rightward move in Israeli politics in recent years, the coalition was able to push through.

However much sympathy one may have for the opponents, they are not only on the losing side of an Israeli political trend but also trying to square a circle. There always has been an inherent and fundamental tension between the idea of Israel as a democracy and the concept of giving preferential treatment to a single religious or ethnic group over all others.

Major proponents of the new law recognize this, and some of them have been disarmingly frank about it. The hardline Minister of Justice, Ayelet Shaked, has explicitly disparaged the idea that Israel should respect universal values. She has stated openly that if there is a choice between maintaining the Jewish majority and Jewish character of Israel and observing human rights, it is human rights that should be sacrificed. Or take it from the most influential big-money backer of Netanyahu and of American support for Netanyahu’s policies: casino magnate Sheldon Adelson. At a conference in 2014 that discussed implications of perpetual Israeli occupation or annexation of the West Bank without giving Palestinian residents the right to vote, Adelson declared, “Israel isn’t going to be a democratic state. So what?”

Certainly infringement of human rights should be criticized wherever it occurs. There is plenty to criticize about Israel’s infringement of rights—not just regarding the one-fifth of Israeli citizens who are not Jewish and whose second-class citizenship the new basic law enshrines, but even more so regarding the residents of Israeli-occupied territory who are denied political rights altogether. But in the interest of treating states and not just individuals equitably, it should be noted that Israel is hardly alone in its region when it comes to giving preferential treatment to members of one religion even when this means impairing the freedom and rights of others.

In this respect Israel resembles, for example, Iran. Iran officially calls itself an Islamic Republic—the kind of constitutional self-identification that is comparable to Israel’s new basic law about self-determination being something only for Jews. Iran does officially recognize some (though not all) minority religions, and it reserves seats in its legislature for Christians, Jews, and Zoroastrians. But everyone realizes that the state religion of Shia Islam has preference over all others in many ways that are politically as well as religiously significant.

The most extreme pattern of religious preference at the expense of the rights of others is in Saudi Arabia. The kingdom considers the Koran to be its constitution. Open practice of any religion other than Islam is prohibited. Farther east there is Pakistan, which from its birth identified itself as the home and refuge for South Asian Muslims, much as Israel has identified itself as the home and refuge for diaspora Jews. Religious intolerance and impairment of the rights of non-Muslims, including through blasphemy laws, prevails today in Pakistan.

Even places in Israel’s neighborhood that do not have a single dominant religion exhibit religious preferences outweighing wider human and political rights. If you are Lebanese, for example, forget about ever seeking the country’s presidency unless you happen to be a Maronite Christian—despite that faith representing a declining proportion of the country’s population.

More generally, Israel has increasingly come to resemble the surrounding region in its social mores, especially with the rise in numbers and influence of ultra-Orthodox Jews and the political parties that represent them. Specifically with regard to segregation of the sexes and even, occasionally, religiously-motivated abusive treatment or women or girls, the resemblance is closest to scenes elsewhere in the region where fundamentalist Islam prevails.

In short, Israel, especially as far as issues of religious preference and related political exclusivity are concerned, is very much a Middle Eastern state. It is worthy of that descriptor as a nation that defines its character and objectives in pre-Enlightenment terms, with ancient scripture and religious lore given preference over modern conceptions of human rights.

The Fiction of Shared Values

As such, Israel does not share many of the most important values of Western liberal democracies, including the United States. Religious neutrality—especially given the major role religion had played in original settlement of some of the American colonies—was highly important in establishment of the United States. When Thomas Jefferson and James Madison put a draft of the Virginia Statute for Religious Freedom before the state’s General Assembly in 1779, devout Christians such as Patrick Henry tried to insert a reference to “Jesus Christ” in the opening words but were voted down overwhelmingly. Jefferson approvingly interpreted the vote as a sign that the legislature wanted the law “to comprehend, within the mantle of its protection, the Jew and the Gentile, the Christian and Mahomedan, the Hindoo, and Infidel of every denomination.” The Virginia law was a precursor to the clause in the U.S. Constitution—the first line in the Bill of Rights—prohibiting establishment of religion. Israel certainly does not share this value, and with a large subjugated population that is walled off because of its ethnicity or religion, nor does it share the important value of equal political rights.

The notion of Israel as a “fellow democracy” rests upon the nature of politics practiced within the subcommunity of Jewish Israelis. Palestinian residents of the occupied territories have no part in that democracy, of course. In effect, the one-fifth of the Israeli electorate that is Arab also is not fully part of it either. An unwritten rule of Israeli politics is that parties representing Arabs can never be part of a governing coalition.

Democracy for a subcommunity does not make the nation as a whole democratic. The United States has seen such situations in the more ignoble parts of its history. Many white primaries in the Jim Crow South were vigorously contested, but that did not make them any less of an affront to American democracy or democratic principles.

The United States does not share important values with Israel, but that does not mean it cannot have a normal and worthwhile relationship with Israel. Washington has quite a close relationship, after all, with Saudi Arabia. It does mean that the fiction of “shared values” should be dispensed with as a rationale for a relationship that goes well beyond normal.

Acceptance of Israel as a Middle Eastern state is necessary to achieve an outcome in everyone’s, including Israel’s, interests, which is for Israel to have full and normal relations with its regional neighbors. Disposing of the fiction of “shared values” with the West will help toward that objective (not to mention helping to clarify exactly what the values of Western democracies really are). A source of resistance to Arab acceptance of Israel has been the perception of Israel as a Western colonial excrescence that has continued long after other British and French (as well as Ottoman) colonialism in the Arab world had ended.

Of course, political rights for Palestinian Arabs are an essential step toward the same objective, even for Arabs who are hardly democrats themselves. The king of Saudi Arabia recently reaffirmed the longstanding Arab position regarding the need for those rights, notwithstanding press reports about his son the crown prince plotting with Jared Kushner to impose some alternative formula.

As for that newly enacted Israeli basic law, the provision promising priority for Jewish-only settlements has, as Arab-Israeli writer Sayed Kashua observes, a “distinctly colonialist tone.”

Image: Israeli Prime Minister Benjamin Netanyahu waves to supporters at the party headquarters in Tel Aviv March 18, 2015. Netanyahu claimed victory in Israel's election after exit polls showed he had erased his center-left rivals' lead with a hard rightward shift in which he abandoned a commitment to negotiate a Palestinian state. REUTERS/Amir Cohen