Israel-Palestine: The Deal-Maker Deals Himself Out 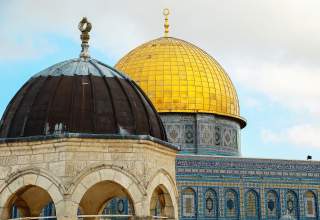 Donald Trump had already moved a long way backward since uttering a few remarks last year raising hopes that he would break out of the straitjacket that binds American politicians on all things involving Israel and the Palestinians and that he would try to be an impartial peace-maker.  He later made his peace with Sheldon Adelson, adopted AIPAC’s talking points as his own, and appointed to be U.S. ambassador to Israel a bankruptcy lawyer who is directly involved with West Bank settlements, is politically somewhere to the right of Benjamin Netanyahu, and likens American Jews who do not agree with him to Nazi collaborators.  Then this week, in a joint press conference with Netanyahu, Trump appeared to abandon what had been U.S. policy through several administrations, Republican and Democratic, of support for creation of a Palestinian state alongside Israel as the only feasible and durable solution to the Israeli-Palestinian conflict.  The president’s exact words were, “I’m looking at two-state and one-state, and I like the one that both parties like. I’m very happy with the one that both parties like.  I can live with either one.”

As has become typical with so much of the policy of this month-old administration, confusion reigns.  The next day, Trump’s ambassador to the United Nations, Nikki Haley, told reporters, “We absolutely support a two-state solution.”  Probably the best interpretation of what was going on at that White House press conference is consistent with insights offered by former U.S. ambassadors to Israel Daniel Kurtzer and Daniel Shapiro, both of whom describe the joint appearance in terms of two leaders dealing with domestic pressures and wanting to look chummy with each other, rather than as an occasion for announcing new diplomatic departures.  Specifically, Trump’s comments were a favor to Netanyahu in dealing with the extreme right-wing of his own governing coalition, by pouring some cold water on the two-state concept without Netanyahu having to utter the words “two-state solution” himself.

As random and disorganized as Trump’s tweets, blurts to reporters, or other verbal expressions may be, when the president of the United States says something it either is policy, at least declaratory policy, or affects policy.  And so it must be noted how utterly unreal, and divorced from the concept of a true peace agreement, was Trump’s responding to a question about backing off from commitment to a two-state solution by talking about what “both parties like,” as if there were anything that both parties like right now that would not be a two-state solution.  The only thing that the vast majority of Palestinians would “like” is getting their own state or, failing that, full and equal rights for Jews and Arabs alike in a single state.  But that latter alternative would be disliked by most Israelis (not just the extreme right) insofar as it would imply, for demographic reasons, destruction of the concept of Israel as a Jewish state.

Trump tosses these words around amid apparent thinking within his own administration and Netanyahu’s about an “outside-in” approach in which development of relations between Israel and some Arab states would lead to Arab pressures on the Palestinians to settle their own conflict with Israel.  This notion is far removed from any realistic peace, and not only because the key to ending an occupation is not to pressure the occupied party, who does not control the situation on the ground, rather than the occupier, who does control it.  The notion also is merely a derivative of right-wing hopes in Israel, based on finding some common cause with some Gulf Arabs in disliking Iran, that the international opprobrium and isolation of Israel that results from its occupation and apartheid policies can be kept indefinitely at tolerable levels.  That is a strategy for indefinitely continuing the occupation and apartheid, not for ending that arrangement and achieving peace.

The Arab states have had their position on the table for fifteen years in the form of the Arab peace initiative, which lays out in simple form the basic trade of full recognition of, and peace with, Israel in return for an end to the occupation and just settlement of the Palestinian refugee problem.  The Arab peace plan was modified later to make clear that it includes the possibility of land swaps that would not require all of the West Bank to be returned to Arab sovereignty.  There is no reason to expect Saudi Arabia or any of the other Arab governments involved to abandon the concept enshrined in this initiative.  And however much one talks about the Arabs’ distractions with their own intramural problems, the sentiments among Arab populations as well as regimes regarding the plight of their co-ethnic brethren in Palestine is not about to be flushed down the toilet by pressuring Palestinian leaders to accept some bantustan-like arrangement and calling it a peace settlement.

As with other early moves of President Trump, his posture on this set of issues illustrates a more general tendency of his regarding governing.  Trump billed himself as a master deal-maker, but supporters who liked him for that reason should have looked more carefully at the sorts of deals he was accustomed to making.  Most of his business deals were more like one-night stands than like lasting relationships.  Sell naming rights, pocket the cash, and let someone else worry about running the enterprise that bears the Trump name.  Even when Trump’s own organization was more directly involved in a property, there was a tendency toward cutting and running.  His business record featured repeated stiffing of suppliers and sub-contractors and, when necessary, repeated bankruptcies—help on which evidently is part of what earned the settlement-loving David Friedman that ambassadorial appointment.

Note how often Trump’s foreign policy is referred to, by himself and now by others, in terms of whether “a deal” will be made with some other country, whether it is Russia, China, or some other state.  Foreign relations should not be thought of in such a one-shot, pointillist way.  Foreign relations, and how they affect U.S. interests, are instead a matter of continuing relationships in which interests are always intermingling, colliding, and evolving.  “One and done” may work for aspiring pro basketball players, but not for U.S. foreign policy.

This is as true of the Israeli-Palestinian conflict as of other sticky foreign policy problems.  Pressuring Palestinians into something that can be labeled a “deal” but does not respond to ordinary human aspirations for a better life and national self-determination does not make a problem go away.  It can make it even worse.  It can come back in the form of intifadas, terrorism, or something else that damages the interests of Israelis and Americans as well as Palestinians.  Trump may not have to worry about such things any more after either impeachment or re-election defeat, but the rest of us will.

Image: Dome of the Rock in the Old City of Jerusalem, Israel. Creative Commons/Pixabay