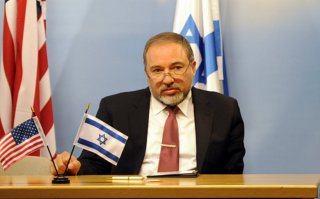 There already shouldn't have been any doubt about the orientation of the current Israeli government and the associated obduracy of that government in blocking any path toward resolution of the Israeli-Palestinian conflict. The government led by Benjamin Netanyahu is firmly rightist, dominated by those opposed to the relinquishing of occupied territory or the creation of a Palestinian state. Netanyahu, who comes across as one of the more moderate members of his own coalition, has paid more lip service than some other members of that coalition to the idea of an eventual Palestinian state, but he has made clear with other words and actions that he has no intention of any such thing coming into being on his watch, or of taking any meaningful steps toward such a state coming into being. Now come reports that Netanyahu is offering the defense ministry to former Moldovan nightclub bouncer (and resident of a West Bank settlement) Avigdor Lieberman. This will bring into the ruling coalition Lieberman's Yisrael Beiteinu party, which even within the Israeli context is usually described as “hard right.”

Bringing Lieberman into the government is indicative not only of the overall orientation of that government but also of some larger disturbing trends in Israeli attitudes that the government has fomented more than it has discouraged. If Lieberman is made defense minister he would replace Moshe Ya'alon, who in recent days has backed the Israeli military in prosecuting (though only for manslaughter, not the murder that occurred) an Israeli soldier who was caught on videotape shooting in the head, at close range, a Palestinian man who was wounded and lying on the ground, already subdued and obviously not a threat. Lieberman has joined other hardliners in expressing support for the soldier. (Netanyahu has visited the soldier's family to express sympathy.)

Netanyahu had been trying to recruit another coalition partner to increase his government's thin majority in the Knesset. Talks with centrist leader Isaac Herzog fell through; the government evidently had more in common with the crude hard right tendencies of Lieberman. Perhaps the timing of this latest political move was a natural outcome of this sequence of negotiations. Or maybe it was at least as much another example of Netanyahu's proclivity for poking a stick in the eye of foreign leaders who look like they might be getting on his case about the Palestinian conflict—such as timing an announcement of more settlement expansion to coincide with a visit of Vice President Biden. This time the stickee is the French government, which is organizing an international conference for later this year on Israeli-Palestinian peace.

All honest outside observers should use the report about Lieberman coming into the Israeli government as an occasion to remind themselves that this tragic and long-running conflict continues to run because one side refuses to end it. The gross asymmetry between the two sides is all-important. One side, the occupying power—the side with the firepower—has the ability to end the occupation and resolve the conflict if it decided to do so. The other side has no such power. That other side, the Palestinian side, has tried to use violent resistance but has subsequently and correctly drawn the conclusion that such violence is not the answer; the violence, unsurprisingly, only stokes legitimate fears among Israelis about their security. Violence has been continuing in the unplanned, spontaneous, and frustration-driven form of young people grabbing knives and stabbing the first Israelis they can find. The Palestinian leadership has turned to multilateral diplomacy, which, besides popular boycotts, is about the only tool it has left. And the Israeli government does everything it can to impede and to foil such diplomacy, as it is trying to do now with the French initiative.

A common urge to sound impartial leads to the common refrain that the Israeli-Palestinian conflict persists because neither side has the political will to settle it. Nonsense. The overwhelming majority of Palestinians do not want to continue to live under Israeli occupation. They have the will but not the power to settle. There certainly are divisions and political weakness on the Palestinian side—of which the Israeli government has striven to prevent any repair, such as in “punishing” the Fatah-dominated Palestinian Authority through withholding tax revenue whenever it has moved toward reconciliation with Hamas—but there is no significant pro-occupation party among Palestinians. The hardliners who control Israel policy have the power but—as ample evidence, even without Avigdor Lieberman, has shown—not the will, as long as third parties do not make them suffer any meaningful consequences. They do want the occupation to continue.

The Netanyahu government's repeated claim that it wants to negotiate with the Palestinians should be described as the charade that it is. It is understandable that Palestinian leaders have no desire to engage in talks that have no prospect of leading to anything, when such engagement would just mean participating in the charade while the occupation continues and more facts are built on the occupied ground. The insincerity is all the more obvious when Netanyahu speaks of talks with “no preconditions” while at the same time insisting that the Palestinians pronounce Israel to be a “Jewish state”—a precondition that implicitly limits how the issue of Palestinian refugees and right of return can be resolved, and also would mean the Palestinian leadership formally signing on to a declaration that non-Jewish Israelis are second-class citizens. Those are the only things such a pronouncement would mean. The Palestinian leadership long ago recognized, formally and unequivocally, the state of Israel. As Palestinian leaders have noted, that state is free to describe itself any way it wants.

With the American political system still wearing its usual straitjacket on this issue, the main hope right now for taking any steps out of this tragic situation lies with the French initiative. If the United States is to do anything helpful any time in the foreseeable future, it probably will have to come in the remaining eight months of the Obama administration. One of the two presumptive presidential nominees speaks of taking U.S.-Israeli relations “to the next level”—and it is safe to assume she doesn't mean that the next level will consist of imposing consequences for the continued occupation. The other presumptive presidential nominee caused nervous moments in the Israel lobby when he talked about being impartial, but the nerves were soothed with a speech to AIPAC that said all the “right” things. And now he has Sheldon Adelson and Adelson's heavyweight bankroll on his side, with everything that implies for this nominee's future posture on Israel-related issues if he were to be elected.