John Kerry Nails It: Realities of the Israeli-Palestinian Conflict 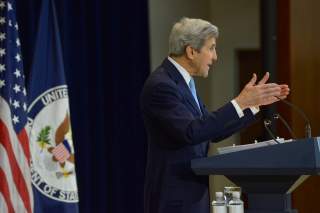 Secretary of State John Kerry’s speech this week on the Israeli-Palestinian conflict is an excellent statement of the realities that are inescapable aspects of this conflict and that anyone who claims to deal with the dispute seriously must understand.  Most of those realities the secretary described with admirable clarity and directness.  A few others, at least as important, come through between the lines, although the hand of political correctness on matters involving Israel still weighs so heavily that even a secretary of state with less than a month to go before becoming a private citizen does not feel free to state them directly.

Important points that the secretary made explicitly, and that should be takeaways from the speech for everyone, include these:

For U.S. policymakers dealing with this conflict, U.S. interests must come first.  The United States should not, any more than any other outside party claiming to want to resolve the conflict, act as lawyer for one side or the other.  U.S. presidents and secretaries of state are paid to advance the interests of their own country, not those of any foreign government or entity.  As Kerry put it near the outset of his speech, “My job, above all, is to defend the United States of America – to stand up for and defend our values and our interests in the world. And if we were to stand idly by and know that in doing so we are allowing a dangerous dynamic to take hold which promises greater conflict and instability to a region in which we have vital interests, we would be derelict in our own responsibilities.”

A two-state solution, notwithstanding how much out of reach it seems to become each day, is still the only outcome that can provide lasting peace and enable Israel to be a Jewish and democratic state.  For the Palestinians, indefinite denial of their own nation-state means indefinite denial of the aspirations for self-determination felt by any other people, and indefinite subjugation, discontent and the inevitable violence that results from such denial.  For Israelis, the basic demographic and geographic facts that frame the national choice remain the same as they have always been with regard to being a Jewish state, being democratic, and being in control of all the land between the Mediterranean and the Jordan River.  Israel can be any two of those things, but it is impossible to be all three.

To those inclined to discard the idea of a two-state solution right now and to speak of one state, Kerry asked this: “So if there is only one state, you would have millions of Palestinians permanently living in segregated enclaves in the middle of the West Bank, with no real political rights, separate legal, education, and transportation systems, vast income disparities, under a permanent military occupation that deprives them of the most basic freedoms. Separate and unequal is what you would have. And nobody can explain how that works. Would an Israeli accept living that way? Would an American accept living that way? Will the world accept it?”

Israeli settlements are not the only impediment to a peace settlement, but they are one of the biggest impediments.  Apologists for Israeli policies routinely argue in a monocausal way about troubles in the Middle East, saying that if X doesn’t explain everything then we should behave as if it explains nothing.  West Bank settlements have often been the X in this mode of argumentation.  Kerry went into considerable detail in his speech with facts and figures about how the settlement program is, as a straightforward matter of geography, making a viable Palestinian state less and less of a possibility.  He observed, “If more and more settlers are moving into the middle of Palestinian areas, it’s going to be just that much harder to separate, that much harder to imagine transferring sovereignty, and that is exactly the outcome that some are purposefully accelerating.”

Condoning expansion of some settlements but not others is not a solution.  This is a favorite pseudo-solution to the settlements problem among those who want to appear reasonable while tilting heavily toward Israel and the settlement movement.  The underlying presumption is that most of the biggest and oldest settlement blocs will become part of Israel in a final agreement, so we should be cool with new construction there and limit our displeasure to newer settlements that are even deeper in the West Bank.  Such a formula flouts the principle of international law that prohibits any colonization by the conqueror of militarily conquered territory.  It also flouts the concept—repeatedly voiced at least as much by the Israeli government as by anyone else—that the terms of a final agreement should be determined in direct negotiations between the parties and not predetermined, including by outsiders.  Kerry aptly described the problem as being that “the decision of what constitutes a bloc is being made unilaterally by the Israeli Government, without consultation, without the consent of the Palestinians, and without granting the Palestinians a reciprocal right to build in what will be, by most accounts, part of Palestine.”

Settlements do not contribute to Israeli security, and instead detract from it.  Kerry noted how many settlements “actually increase the security burden on the Israeli Defense Forces.”  He also could have mentioned how prominently the Israeli occupation, including the colonization through settlements, has figured as a cause célèbre for extremist violence.

It’s not only the colonization through settlements, but also other aspects of the occupation, that are unsustainable.  They also are a form of oppression and denial of rights to an entire population.  Kerry spoke of visiting West Bank communities where he “met Palestinians struggling for basic freedom and dignity amidst the occupation, passed by military checkpoints that can make even the most routine daily trips to work or school an ordeal, and heard from business leaders who could not get the permits that they needed to get their products to the market and families who have struggled to secure permission just to travel for needed medical care.”

The position of the international community on the issue of the occupation has been one of overwhelming consensus (except for the United States and Israel) and consistency.  The resolution passed by the Security Council last week was not a departure, despite contentions that it was.  The distinction drawn between Israel and the territory it occupies is consistent with the consensus view that Israel is a full and legitimate member of the community of nations while its occupation of Palestinian territory is illegitimate.  Neither is there anything new in the resolution involving East Jerusalem—which is just as much a part of militarily conquered territory as the rest of the West Bank and just as much subject to negotiation to determine final status, rather than having that status determined by unilateral and expansive line-drawing by one of the parties.

The characteristics of a lasting and fair peace have been well known for some time.  The terms still must be determined through negotiations between the parties, but this is not as if there were doubt about what the overall shape would have to be to constitute a lasting peace, or doubt about it being possible to construct a workable two-state solution—at least until and unless continued Israeli colonization through settlements extinguishes that possibility altogether.  Kerry described the necessary characteristics by laying out six general principles for any agreement—principles that many different international statesmen could have expressed in very similar terms in previous years, and that many have in fact expressed.

In addition to these realities, the dedication of this secretary of state, and the president under whom he serves, to work for outcomes that would serve the security and well-being of Israel as well as other concerned parties comes through strongly.  Thomas Friedman captures this well when he writes, “Barack Obama and John Kerry admire and want to preserve Israel as a Jewish and democratic state in the Land of Israel. I have covered this issue my entire adult life and have never met two U.S. leaders more committed to Israel as a Jewish democracy.”  President Obama bestowed on Israel the biggest aid package that the United States has ever given to anyone, and before last week he was the only U.S. president who, using the U.S. veto power, had never allowed the United Nations Security Council to pass any resolution critical of Israel.  Against this background, the calumnies being thrown at Mr. Obama by the Israeli government and those who follow its lead are offensive and inexcusable.

Secretary Kerry’s speech reflected some additional realities in a more subtle and indirect way, including the following.

The current Israeli government rejects a two-state solution.  By now, not only the deeds but even the words of this government and its senior members have made obvious how much of a smokescreen have been Prime Minister Netanyahu’s occasional utterances, intended for international audiences, ostensibly accepting the idea of a Palestinian state.  Power in Israel has moved toward members of the hard right who are unabashed about openly rejecting the concept of such a state and openly calling for annexation of occupied territory.  It takes two negotiating partners to make a deal.  Right now there is no such partner on the Israeli side.  There will not be until and unless there is a major political redirection in Israel.