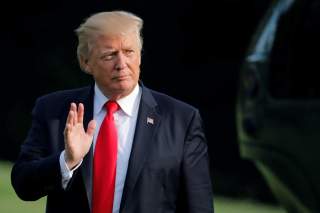 Don’t be either fooled or relieved by President Trump’s waiving, for now, of nuclear sanctions on Iran, and thus his forgoing of an explicit withdrawal from the Joint Comprehensive Plan of Action (JCPOA), otherwise known as the Iran nuclear agreement.  Trump still is determined to destroy the agreement, though not necessarily in the way he threatens, or in a way some have feared.  He is set on destroying the JCPOA partly because of the same guiding principle, if it can be called that, steering so much of his presidency, which is to tear down any significant accomplishment of his predecessor.  His effort to destroy the accord also is motivated by his submission to elements that do not want anyone to reach agreements of any sort with Iran—such elements mainly being the right-wing government of Israel and its backers in the United States.

Trump’s effort is impeded by the fact that the JCPOA is working.  It continues, as confirmed by international inspectors, to fulfill its purpose of blocking all possible paths to a possible Iranian nuclear weapon.  Iran continues to comply with its obligations under the agreement.  As such, the JCPOA continues to serve the interests of the United States and of international security and the cause of nuclear nonproliferation.  These evidently are not interests that motivate Trump, but he cannot afford to be honest about his actual motivations.  The fact that the agreement is working prevents him from making any case for withdrawing from the agreement directly and explicitly.

Trump’s statement on this subject blows all the confusing smoke that can be blown about Iran and about the JCPOA, with much of it having nothing to do with the JCPOA.  As usual, the smoke is filled with misconceptions, such as that a cash settlement that resolved an issue of undelivered aircraft that the shah ordered 40 years ago supposedly was part of the nuclear deal, when in fact it was not.  Or that we should get angry over how Iran “has funded, armed, and trained more than 100,000 militants to spread destruction across the Middle East,” when some of those militants have been fighting on the same side as the United States and its allies against Islamic State (ISIS).

The portions of the statement that really are about the JCPOA revolve around the old, familiar notion of getting a “better deal”—a notion that seeks to bridge the gap between the reality of an agreement that is working and a desire to trash that same agreement.  The notion never was valid.  The JCPOA is the product of a long, laborious negotiation that thoroughly tested the limits of the bargaining space and of feasibility.  Just as athletes talk about an exhaustive effort as “leaving everything on the field”, the diplomats involved in crafting the JCPOA left everything on the negotiating table.  None of the other six parties to the agreement show any appetite for renegotiation, or see any feasible basis for it.  Moreover, it is just as valid now as when negotiations began that if each side tried to bring into the negotiations diverse unrelated grievances against another side, the negotiations would have failed and there never would have been any agreement restricting Iran’s nuclear program.

Trump’s statement seems to envision some sort of process in which the United States leans on the Europeans to make a one-sided imposition of additional terms on Iran.  Or as the statement puts it, to engage key European allies in “seeking to secure a new supplemental agreement”.  It is not clear whether this would involve real negotiation with Iran or a fiat imposed by the P5+1, or by the EU3+1, or something else.  Certainly there is no mention of how one has to give something to get something.  Probably Trump doesn’t have a clear notion of what this would mean in practice.  Probably he doesn’t care, because a more plausible interpretation is that this formulation is merely a sham on the road to hoped-for destruction of the JCPOA.

In parallel with whatever would be this U.S.-European affair, the statement also talks about legislation by the U.S. Congress that would move in a similar direction.  Here the form and effect of whatever Trump has in mind is just as hard to fathom, given that Congress cannot unilaterally change the terms of an already completed and implemented international agreement.  But a closer look at the “four critical components” that Trump says must be in any bill he would sign underscores the sham-like quality of what he lays out.

The first component is that any bill “must demand that Iran allow immediate inspections at all sites requested by international inspectors.”  So how exactly would that differ from the current situation?  No country would ever agree to give outsiders the run of the country, going wherever they wanted unannounced. The International Atomic Energy Agency has given no indication that its inspectors have been denied access to any site in Iran they had reason to inspect.  The JCPOA lays out in detail procedures not only for unlimited inspections of declared nuclear sites but also requested inspections of undeclared sites, including military bases—procedures in which the Iranians would be outvoted and the inspection would take place if there were disagreement between Iran and the IAEA about access.

The second component is that a bill “must ensure that Iran never even comes close to possessing a nuclear weapon.”  How close is close?  The JCPOA certainly has pushed Iran farther away from any ability to make a nuclear weapon.  In terms of the familiar measure of “breakout time,” that push moved the time from something like two months to more like a year.  If the vague language about closeness is code for zero enrichment of uranium, that idea was tried and failed during the George W. Bush administration, and it is still just as much out of reach today.

The third component refers to the so-called “sunset” clauses that apply to some of Iran’s obligations under the JCPOA.  The statement fails to mention how most of the important provisions of the accord, including the intrusive inspections and Iran’s basic commitment never to acquire a nuclear weapon, are permanent.  Nor does it mention how expiration dates are standard fare in arms control agreements, including some of the big ones the United States has reached with the USSR or Russia.  But this very subject of sunset clauses underscores the shambolic nature of the demands that Trump’s statement lays out.  Trump explicitly threatens to pull out of the agreement if his demands are not met and his “components” don’t materialize.  So what would happen if the component about ending sunset clauses doesn’t materialize, the United States pulls out of the agreement, and Trump’s dream of killing the JCPOA altogether is met?  Why, then Iran would be free to spin as many centrifuges and enrich and stockpile as much fissile material as it wants right away, rather than having to wait ten or twelve years or to some other time limit.  So much for the supposed importance of limits that never expire.  And so much for the supposed bargaining clout that the dealmaker-in-chief would have in negotiating a “better deal”.

The fourth component is that “legislation must explicitly state in United States law—for the first time—that long-range missile and nuclear weapons programs are inseparable, and that Iran’s development and testing of missiles should be subject to severe sanctions.”  This presumes that an act of Congress can negate a physical fact about weapons and weapons programs.  One could even say it presumes that an act of Congress can repeal laws of physics, in the sense that some ballistic missiles are physically incapable of carrying a payload the size of a nuclear warhead.  Long-range missile programs and nuclear weapons are not inseparable.  Many missile programs, including Iran’s, serve strategic and deterrent purposes that have nothing to do with nuclear weapons.  Iran might be open to negotiating restrictions, such as on range, that would apply to regional neighbors as well as to itself.  But given Iran’s history of being on the receiving end of missile firings and given the air and missile forces that surround it today, any expectation of even a heavily pressured Iran unilaterally forgoing its own ballistic missiles is unrealistic.

Nobody knows if Trump will carry out his threat to stop waiving nuclear sanctions and to withdraw from the JCPOA if his demands are not met.  He may be lying about this just as he lies about so many other things.  He has lied about other contingent threats, such as to sue women who, prior to the election, accused him of sexual misconduct.  But he does not have to execute the threat to continue on his course of piecemeal destruction of the JCPOA.  Each step in that process makes the agreement less attractive to Iran and increases the chance that the Iranians will throw up their arms in dismay and disgust over U.S. noncompliance and declare the agreement null and void.

The Trump administration already has violated not only the spirit but also the letter of the JCPOA by, for example, urging other member states of the G-20 to end commercial ties with Iran.  This violates the commitment in paragraph 29 of the JCPOA for the parties to “refrain from any policy specifically intended to directly and adversely affect the normalization of trade and economic relations with Iran inconsistent with their commitments not to undermine the successful implementation of this JCPOA.”  The more that the United States piles additional sanctions on Iran, ostensibly for non-nuclear reasons, the more this negates the effects of relief from the nuclear sanctions.