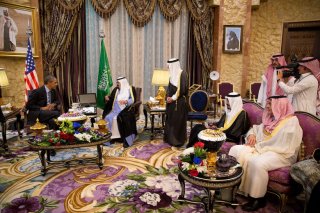 If any governments, besides the one in Baghdad, ought to be especially concerned about the recent advances in western Iraq by the Islamic State in Iraq and Syria (ISIS), it would be ones in the immediate Middle Eastern neighborhood at least as much as the United States. To the extent any action by outsiders can make a difference in what is happening in Iraq, it ought to be those neighboring states that undertake it. We in the United States have a hard time realizing that, however, for two reasons.

The other reason is the even stronger tendency to think of other players in world affairs in terms of rigid rosters of allies and adversaries. We condone what those on the first list do and condemn the actions of those on the second list, while failing to realize that each other country in the world, regardless of the labels we may habitually apply to it, has some interests it shares with us and others that conflict with our interests.

The ISIS story is leading Arabs in the Persian Gulf states, and especially in Saudi Arabia, to do some hand-wringing and forcing them to do some policy reappraisal. The Saudis, like Americans, have a habit of rigidly dividing their world into friends and foes, with all the automatic condoning or condemning involved, except that in the Saudis' case the division is defined in sectarian terms. In the Saudi view it's Sunni good, Shia bad. But ISIS is a Sunni group that is so nasty and vile that Saudis in and out of government surely realize it is bad news not just for Shia but for themselves as well. The Saudis could usefully try to exercise some direct influence, including with positive incentives, on the Maliki government, with the objective of enhancing the status and political role of Iraqi Sunnis and thereby undermining the main appeal of ISIS. But first the Saudis have to get over their disdain for dealing with Maliki at all.

The neighboring state that has perhaps the biggest concern about the ISIS story, however, is Iran. The ISIS surge is one of the most salient and clearest examples in which U.S. and Iranian interests are congruent. Both Washington and Tehran want ISIS to be stopped. Iranian public statements have been clear about this objective, although reports vary as to exactly what Iran has done so far regarding assistance or intervention in Iraq.

There is right now an excellent opportunity for useful coordination between Washington and Tehran regarding messages to be sent to, and pressure to be exerted on, Prime Minister Maliki. If both the United States and Iran—the two foreign states on which Maliki's future most depends—tell him the same thing about the need to move beyond his destructively narrow ways of governing, such pressure might begin to have a beneficial effect. Although the Iranians have been happy to see the Shia majority in Iraq finally get out from under Sunni political domination, they also are smart enough to realize that Maliki's performance is more a prescription for unending instability and Sunni radicalism, which neither the Iranians nor we want.

The United States and Iran have wisely been concentrating over the past year on the nuclear issue, so as not to complicate the negotiations with a premature broadening of the bilateral agenda. The ISIS offensive may be a reason to move up the broadening a bit.

If Iran starts taking, or is already taking, more forceful measures such as insertion of Revolutionary Guards into the fight, this probably will stimulate some of the usual alarms among commentators in the United States who are always alarmed about the idea of Iran doing just about anything in the region. The alarms will be misplaced. The immediate goal would be defeat of ISIS, a goal that we share. More broadly what the Iranians want most in Iraq is to prevent a return to the sort of aggressive Iraqi behavior that in the 1980s, with Saddam Hussein's launching of the Iran-Iraq War, brought immense suffering to Iran. Preventing such Iraqi behavior is certainly consistent with U.S. interests, too.

It has often and correctly been observed that by waging a very costly war that ousted Saddam Hussein, the United States did a big favor to Iran—which had far more reason than the United States did to regard Saddam as a menace. Wouldn't it be only fair for Iran now to do most of the heavy lifting in dealing with the current situation?

And if in so doing, the Iranians incurred substantial costs, got overextended, and started experiencing back home their own version of Iraq War syndrome, we wouldn't be unhappy about that either, would we?