Making America Great, and Saving Israel in the Process 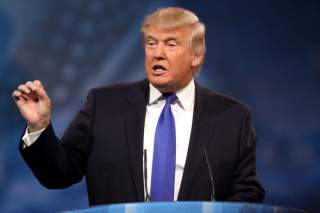 A depressing sameness characterized the speeches of presidential candidates to the recently concluded exercise in fervid conformity that is called the AIPAC annual meeting. Although the event and the organization ostensibly are dedicated to support for, and friendship with, the state of Israel, in practice the dedication was instead to the policies of the right-wing government that currently holds power in Israel, which is something different. There was nothing approaching a free and open discussion of what policies would be in the interest of the peace and security of Israel and that a true friend of Israel would support. There was no mention of the occupation that, in the course of nearly half a century, has become Israel's defining characteristic and the single biggest barrier to Israel being able to enjoy a future as a democratic and Jewish state.

The Republican candidates all found somewhat different ways to say they would destroy the agreement that limits Iran's nuclear program. Such destruction would, of course, serve the purpose of the Netanyahu government in helping it to fulminate endlessly about Iran as the “real problem” in the Middle East, taking attention away from every other problem; maybe we would even see a return of cartoon bombs to the rostrum of the United Nations. But the candidates did not explain how destroying the agreement, which would mean the Iranians could spin as many centrifuges as they want, enrich as much uranium as they want to whatever level they want, and kick out all of the extra international inspectors provided for in the agreement, would somehow be in the interest of Israeli security. As leading Israelis who have dedicated careers to their nation's security recognize, it would not be.

Perhaps one question of interest regarding the candidates' otherwise drearily similar speeches to the AIPAC meeting was who, in this contest in pandering, could out-pander the rest. Donald Trump made a go of it, evidently erasing some of the suspicions he had aroused among this constituency with earlier sinful suggestions such as that a posture of neutrality would be needed for the United States to do something about the Israeli-Palestinian conflict. No such lines were crossed in Trump's speech at AIPAC, and he got a positive reception that would remind some observers of how earlier notorious demagogues could whip up frenzy in a crowd.

But the prize for out-pandering the others should go to Ted Cruz's speech, as measured by sheer shamelessness in using extreme and outright deceitful rhetoric. Speaking after Trump, Cruz made sure that no one would ever suspect him of falling into that disgraceful state known as neutrality or to do anything that might lead to creation of a Palestinian state. To make doubly sure no one missed the point, in the second sentence of his speech, right after saying “God bless AIPAC” and stating how thrilled he was to be there, Cruz declared that “Palestine has not existed since 1948.” And if any resolution on Palestinian statehood were to come to a vote at the United Nations, said Cruz, “I will fly to New York to personally veto it myself.”

The thesaurus of extreme terminology at Cruz headquarters must be terribly dog-eared after preparing this speech, including, among much else, the portions about the Iran nuclear agreement. According to Cruz, the agreement “is Munich in 1938” and risks “catastrophic consequences” by “allowing a homicidal maniac to acquire the tools to murder millions”—never mind that the agreement is all about taking tools away from the Iranians. Among the cascade of deceitful references throughout the speech is a bizarre comparison in which Cruz says that the nuclear agreement “gives over $100 billion to the Ayatollah Khomeini, the world's leading state sponsor of terrorism,” and that this “dwarfs the $3 billion we give each year to the nation of Israel,” a difference that is “unconscionable” and "fundamentally immoral.” No attention is paid to the fact that U.S. aid to Israel comes straight out of the pockets of American taxpayers whereas frozen assets that have been unfrozen under the nuclear agreement already belonged to the Iranians and the United States is not “giving” Iran any of this, that the amount of unfrozen assets not already spoken for to settle existing accounts is far less than $100 billion, and that Ayatollah Khomeini has been dead for 26 years.

The one remaining presidential candidate who did not speak to the AIPAC meeting was Bernie Sanders. Sanders, campaigning elsewhere, instead submitted a written statement that addresses important issues involving Israel. Sanders, who happens to be the only Jew in the presidential race, notes at the outset of his statement that he is the only candidate with personal ties to Israel, having spent time there on a kibbutz as a young man. The leading issue that Sanders addresses in the statement is the Israeli-Palestinian conflict. What he says about it is vastly different from what the other candidates, and especially the Republicans, said about it in their speeches. What he says also should be seen as eminently reasonable by those who genuinely want peace to replace that conflict and by those who are true friends of Israel. It is a well-balanced statement that recognizes that peace “will require compromises on both sides” and will mean “security for every Israeli from violence and terrorism” as well as “security for every Palestinian.” Sanders does not shy away from using the word “occupation,” and he notes that “it is important to understand that today there is a whole lot of suffering among Palestinians and that cannot be ignored. You can’t have good policy that results in peace if you ignore one side.”

The depressing sameness of speeches at the AIPAC meeting suggests that with the election of anyone other than Sanders, there will be a depressing sameness in U.S. policy toward Israel and the Israeli-Palestinian conflict beginning next January. That will mean Israel continuing down the path of apartheid and isolation, with more endless conflict and more shedding of blood of Israelis as well as Palestinians, and Israel moving farther away from ever being a peaceful, democratic, Jewish state.

Barack Obama still has almost ten months to shift that momentum at least somewhat. He already has shown a willingness and ability to defy the rightist Israeli government and the lobby that works on its behalf when he waged the political battle needed to bring the Iran nuclear agreement into existence. He has given ample indication that he fully understands the underlying issues. He has given other indications of being able and willing to set some new directions notwithstanding the longevity of old, stale, and destructive directions—notably with his changing of U.S. policy toward Cuba. And he never needs to run in any election again, not even for dog-catcher.

Mr. Obama should, sometime before the end of summer, give a major speech that lays out the main terms of what knowledgeable observers of the Israeli-Palestinian conflict have long understood to be necessary parts of any final settlement of that conflict. This would not preclude necessary negotiation of details between the parties, but would lay out the framework for a two-state solution that has been clear for some time. You might call this an updated version of the Clinton parameters. Then in the autumn the United States should not just not veto, and not just accept, but should sponsor and promote a resolution of the United Nations Security Council that incorporates this framework.

The rightist government in Israel would scream, as would the U.S. lobby that works on its behalf. Until and unless there is significant political change in Israel, the combination of religious rationalization, economic greed, and government-stoked fear that has powered the tenacious clinging to conquered territory will still be a major barrier to a peaceful path. But a change in U.S. direction—if speeches and resolutions are backed up with corresponding use of material U.S. leverage—might at least lead Israeli voters and true friends of Israel elsewhere to see that the days of U.S. abetting of the self-destructive behavior are over, and to acknowledge that the conflict with the Palestinians over land and sovereignty cannot indefinitely be wished or bludgeoned away. And that would mean the new U.S. president, whoever he or she is, would be facing a new situation and new possibilities, different from the one that persists today.

To return in the end to the United States' own interests—as we always should—the slogan that the Trump campaign uses, about making America great again, has some relevance. A really great nation does not display the obsequiousness toward another government that was on display in the arena where AIPAC met, and people who want to lead a great nation should not display it either. We should ask, as President Bill Clinton did after his first meeting with a bullying Benjamin Netanyahu, “Who's the [expletive deleted] superpower here?”