Messy Realities and the Unhelpful Debate on U.S. Foreign Policy 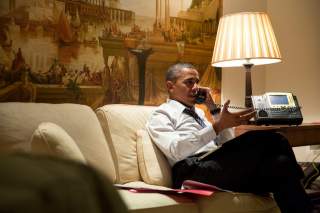 Much current debate in the United States about foreign policy can be boiled down—at the risk of the sort of oversimplification that too often characterizes the debate itself—to the following. On one side are calls for the United States to do more (exactly what it is supposed to do more of often does not seem to matter) in response to untoward happenings in hot spots such as Iraq, Syria, or Ukraine. On the other side, which includes most of the time the Obama administration, is a tempered restraint based on the limitations and complications of trying to do anything more in such places.

This line-up has some similarities to age-old confrontations between hedgehogs, who know (or think they know) one big thing, and foxes, who pay attention to a lot of things without having any one big idea. The nature of the debate has even more to do with the highly asymmetric nature of any argument between incumbent policy-makers, who have the burden of taking real action with real consequences and of dealing with all the messy and costly details, and of outside critics, who have the luxury of bemoaning bad things happening in the world without actually having to take any practical steps to do anything about them, and without having responsibility for the consequences.

This asymmetry has seemed especially marked with the current president, and not only because some of the biggest burdens of his foreign policy have involved cleaning up leftovers from his predecessor's foreign policy (including the premiere threat du jour, the group usually known as ISIS, whose birth was a direct consequence of the Iraq War). The current clear preference of the American public to avoid new entangling military encounters naturally gives rise to the charge that President Obama is merely bowing to that public opinion rather than exerting leadership.

The principal features of the non-incumbent side of the debate are seen over and over again, even if looking beyond such prominent and stalwart members of that side as Senators John McCain and Lindsey Graham, who never met an entangling military encounter they didn't like. One sees these features in the pronouncements of, for example, the ranking Republican on the Senate Foreign Relations Committee, Bob Corker, or of the Washington Post editorial page, which has beaten its drum particularly hard for getting more deeply involved in the Syrian civil war. One familiar feature is the implicit assumption that if there is a nasty situation out there, the United States ought to be able to do something to solve it, coupled with the further assumption that the more actively involved the Untied States becomes in the problem, the more good will come out of the situation.

Another feature is a fondness for applying (again without supporting analysis) the most optimistic assumptions about how some hypothetical alternative policy in the past would have come out. E.g., the idea that if only the United States had done more earlier to assist a “moderate” opposition in Syria, we wouldn't have Assad, or ISIS, or both to deal with today. Or, if only we had come down harder on Putin he wouldn't be mucking around in eastern Ukraine today. Yet another repeated feature is an equation of leadership with forceful action, especially military action—as illustrated by Corker's charge that President Obama is “uncomfortable being commander in chief”.

Also recurrent is the invoking of very hedgehog-like calls for a single “coherent strategy” or “organizing principle” or some such thing, with those making the calls secure in the knowledge that rhetorically such formulations always have an advantage over anything that can be belittled as ad hoc or reactive. The oversimplification involved is grossest when applied to U.S. policy toward the entire world, but there is still oversimplification when such a call is applied even to a single country. We hear, for example, that problems of U.S. policy toward Iraq are a simple matter of deciding whether the United State has a mission of stabilizing Iraq. Actually, it's not really anywhere near that simple. Instability in Iraq has many different facets, some of which should concern the United States and some of which should not, and some of which are amenable to U.S. influence and some of which are not.

Hillary Clinton, whose recent pronouncements must be dismaying to progressive realists fearing they will not have any acceptable choice at the top of the ballot in November 2016, has been talking in the same mode. She tells us that not doing stupid stuff is not an “organizing principle,” and a great nation like the United States needs an organizing principle for its foreign policy. Two things about that comment make it, well, not quite smart. One is that the world is a very disorganized place, and any single organizing principle is too simple to be effective in dealing with all, or even most, of the problems the world throws at us.

The other thing wrong with that comment is that not doing stupid stuff is so important that it deserves to be at the top of any president's checklist, just as Hippocrates taught that “first do no harm” should be at the top of any physician's checklist. Think about the Middle East, and ask what development, whether involving an action or inaction by the United States, has had the biggest effects, for good or for ill, on U.S. interests in recent years. The answer has to be—firmly implanted on the “for ill” side of the ledger—the Iraq War. The most important thing any U.S. president should do is not to do stupid stuff like that, or to get into a position with a serious risk of sliding into something like that.

Mr. Obama's interview with Tom Friedman last week was a clear statement of the other side of the foreign policy debate. Friedman writes that “the president has a take on the world, born of many lessons over the last six years, and he has feisty answers for all his foreign policy critics.” The president's observations reflected at least as comprehensive view of the world as those throwing out the buzz phrases of comprehensive strategy and organizing principle, coupled with an awareness of the unavoidable complexities whether one is dealing with the whole world or with a single troubling country. His answers were not just feisty but insightful, such as explaining why the idea that putting more arms in the hands of “former doctors, farmers, pharmacists and so forth” was never going to be a solution to the problems of Syria, and why in Iraq the incentives for political deal-makers in Baghdad will have at least as much to do with that country's future stability as munitions in Nineveh. The least persuasive aspect of his comments concerned his unwillingness to recognize intervention in Libya as a mistake.

One should hope that Mr. Obama, as a second term president, will not let his policies over the next two years be diverted by ill-aimed screeching of hawks. Even if he doesn't, however, the shape and tenor of current debate risks creating a narrative, the effects of which might not be felt until the next administration, that most of the world's maladies exist because the United States didn't do something more, whatever that something might be.