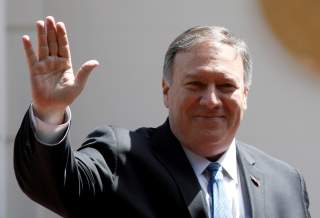 Secretary of State Mike Pompeo has been justly criticized for his creation of a Commission on Unalienable Rights, with the mission of redefining human rights. The move appears designed to base the redefinition on religious doctrine that Pompeo infuses into his conduct of official business. The religious orientation is reflected in the membership of the commission, the common thread of which is a focus on religious issues, often with an openly sectarian coloration. One of the members, for example, contends that Christianity is the foundation of human rights, at least as those rights are understood in the West. Creation of the commission, which will be nested under the Policy Planning Staff, constitutes an end-run around the State Department’s Bureau of Democracy, Human Rights, and Labor, which includes the office that has long monitored human-rights issues worldwide from a nonsectarian perspective.

The obvious backdrop to anything the Trump administration pronounces about human rights is an administration foreign policy that gives short shrift to human rights. This disconnect is most visible in President Donald Trump’s friendly hobnobbing with dictators from Egypt, North Korea, and other countries with harsh authoritarian rule. It is reflected in Trump’s joking with Russian president Vladimir Putin about the inconvenience of a free press and how nice it would be to get rid of bothersome journalists.

The administration also gives low priority to human rights in ways that go beyond the president’s relations with autocratic buddies. Last year, for example, the administration stopped participating in the United Nations Human Rights Council, as part of its practice of shaping its conduct in such international organizations according to what the government of Israel would want. Even regarding religious liberty—the focus of the new commission—human rights have taken a back seat to other administration objectives. This is most obvious in the administration’s deference to the Saudi Arabian regime run by Mohammed bin Salman, which not only murders bothersome journalists but also prohibits the open practice of any religion other than Islam.

The one valid idea in Pompeo’s introduction of the commission is that the concept of human rights, as with other important political and moral concepts, can get diluted and ultimately weakened if too many causes and issues are added to it. But that still does not explain the need for any redefinition today, let alone one with the specific orientation of this commission. Pompeo claims to be an originalist, but why should his appointees be expected to do a better job of defining the core of unalienable rights than the founding fathers did in the Declaration of Independence and the Constitution? Indeed, the heavy religious emphasis of this commission goes against what the founding fathers said. The only mention of religion in the Constitution, including the Bill of Rights, is that government ought to stay out of it, per the establishment clause of the First Amendment.

Internationally, there is the Universal Declaration of Human Rights, which Pompeo mentioned in his statement announcing the commission. Why shouldn’t that declaration still stand as a consensus definition of human rights? Adopted by the UN General Assembly in 1948, it is recent enough to have placed Enlightenment concepts in a modern context, but not so recent as to reflect newer fads of what should constitute a “right.” A U.S. presumption to do better than this will just add to the international perception of U.S. hypocrisy when the administration’s words are contrasted with its policies.

How any foreign ministry, including the Department of State, should define human rights is related to the question of why human rights should be a major part of foreign policy. There are multiple reasons that it should. One is the moral imperative that all persons should be treated with the respect for human dignity and individual well-being that any other persons enjoy. Another is that the place human rights occupy in a nation’s foreign policy is an expression of what that nation stands for and of the character of its citizens.

Too often a discussion of human rights in foreign policy stops there, as in misleading references to a false “values versus interests” dichotomy. But human rights are important in foreign policy for additional reasons. Deficiencies in observance of human rights are closely related to other foreign-policy problems and U.S. interests, even when viewing those interests in a hard-boiled manner that might appear to give little attention to values. One facet of this connection is reflected in what political scientists call democratic peace theory, which is not just a theory but a historical pattern in which nations whose citizens enjoy the political rights of democracy do not wage war against each other. More broadly, denial of human rights is directly related to instances across the globe of political instability. It also is very much related to terrorism and other political violence that has harmed U.S. interests.

Pompeo, with his obsessive hostility to the Islamic Republic of Iran, could look at that country’s history for a reminder of such connections. Denial of many human rights under the U.S.-backed autocratic rule of the shah was a major ingredient of the revolution in the 1970s that led to the creation of the Islamic Republic.

If the question is what sort of human rights the Department of State ought to pay attention to the most, then the answer is: those rights the denial of which cause or exacerbate other problems that the department and the United States have to deal with every week. They have to be genuine rights, consistent with consensus conceptions such as those codified in the Universal Declaration, and not just efforts to advantage one group over another with a phony rationale framed in terms of human rights. But beyond that requirement, insurgents and others who are stirred to action because they believe they are being denied their rights do not need a commission in Washington telling them what those rights are.

The administration could advance unalienable rights most effectively not by trying to amend what the founding fathers had to say on the subject but instead by using what they had to say as a basis for shaping the incentives of other governments. The Saudi regime’s murder of Jamal Khashoggi, for example, was, among other things, a direct affront to freedom of speech and freedom of the press, as enshrined in the First Amendment. The violation of Palestinians’ rights that has underlain decades of destabilizing discontent under the Israeli occupation has involved a denial of the unalienable rights of—to quote the Declaration of Independence—”life, liberty, and the pursuit of happiness.” It also has involved, to use language from the same document, the absence of a government deriving its “just powers from the consent of the governed.” Also applicable to the same situation, with its land grabs and bulldozing of Palestinian homes, is much material in the Bill of Rights—such as what the Fourth Amendment has to say about the “right of the people to be secure in their persons, houses, papers, and effects.”

The United States does not need a new statement about human rights. It needs to shape its foreign policy to be consistent with the statements it already has.