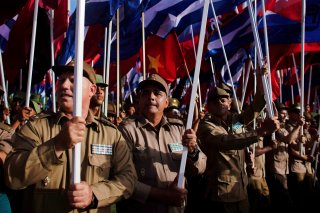 In another of the outgoing Trump administration’s moves on its way out the door that will complicate foreign relations for the new administration, Secretary of State Mike Pompeo reportedly is considering placing Cuba on the U.S. list of state sponsors of terrorism. If Pompeo follows through on this idea, then it would not be the first misuse of this list. Nor would the Trump administration—which last month linked its campaign of favors for the Netanyahu government in Israel to a removal of Sudan from the list—be the first to abuse this list.

Through several administrations, countries such as Iraq and North Korea have been listed or delisted not because of any change in their conduct regarding terrorism but instead to be either nice or nasty to those states for other reasons. For example, the Reagan administration took Iraq off the list as part of a tilt toward Iraq during the Iran-Iraq war in the 1980s—before being placed back on the list when Saddam Hussein’s forces invaded Kuwait.

Cuba is not a state sponsor of terrorism. It has been decades since the Cuban regime—especially given its forced retrenchment following the loss of its principal supporter, the Soviet Union—has been engaging in the sorts of overseas activities that could even begin to make a plausible case for listing. Those activities included its material support for revolutionary movements in Latin America and military operations in Africa—ventures that are now in the distant past. Cuba was retained on the state sponsor list long after that for domestic—American, that is, not Cuban—political reasons. Its retention was testimony to the fear among successive administrations of offending a Florida-centered, vehemently anti-Castro portion of the Cuban-American community. Cuba finally was belatedly removed from the list in 2015, as part of the Obama administration’s normalization of diplomatic relations with Havana.

The lack of any terrorism-related basis for keeping Cuba on the list that long is reflected in how the authors of the annual State Department report on terrorism strained each year to come up with rationales for keeping Cuba in the state sponsor section of the report. One of the things usually mentioned was that Cuba provided a retirement home for a few members of the now-defunct Basque separatist group ETA—men whose main activity in Cuba probably was bocce ball or shuffleboard.  Also mentioned was the presence in Cuba of some members of the Revolutionary Armed Forces of Columbia (FARC), but instead of aiding any guerrilla activity, the Cuban regime in more recent years was working in cooperation with the government of Colombia to facilitate peace negotiations with the FARC.

In addition to adding another complication for the Biden administration, Pompeo’s possible relisting of Cuba is a payoff to the Cuban-Americans who helped keep Florida in the Republican column in last year’s election. Pompeo will, of course, want to retain the support of that part of the electorate if he runs for national office himself. That terrorism has nothing to do with the proposed relisting is reflected in how the State Department’s Bureau of Counterterrorism, which normally would have the action in taking any such step, reportedly has been sidelined from the planning for the Cuba move.

Any time any counterterrorist tool gets misused, it weakens counterterrorism. The purposes of the state sponsor list, as one such tool, are to name and shame regimes that aid or perpetrate terrorism, to deter regimes from resorting to terrorism, and to provide an incentive for listed regimes to get out of the terrorism business.

One of the consequences of the sort of misuse of the tool that the secretary of state is contemplating is to weaken the deterrence of true state sponsorship of terrorism and undermine the incentives for improved behavior. The misuse also sends a message that the United States does not care about counterterrorism. The message comes through clearly when foreign observers contrast something like the Cuba ploy with the same U.S. administration’s indulgence of regimes, such as those of Saudi Arabia and Israel, that really have been perpetrating recent acts of international terrorism.

The ultimate cost of misusing and thus weakening the tools of counterterrorism will take the form of lives lost in the future to international terrorism. Those costs in the future can be serious, even if the link to misuses of today may not be immediately apparent.