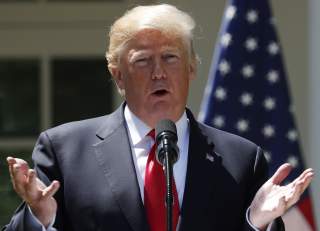 Most press coverage of the NATO summit meeting was about Donald Trump’s political theater, for which NATO itself was merely a backdrop.  Journalists who said their heads were spinning after hearing Trump’s everything-is-fine press conference at the conclusion of the meeting, which sounded like a 180-degree reversal from his insults and threats of the day before, could have saved themselves a headache by realizing that there is no way to make diplomatic sense of any of this.  It was just Trump doing one of his usual things. That thing is to bemoan how supposedly awful was the state of affairs before he came along, to use his own disruptive rhetoric—sprinkled with falsehoods—to create a crisis atmosphere, and then later to claim that he resolved problems that none of his predecessors had been able to resolve.  The claim is made even if nothing material was achieved—as is true regarding military spending by NATO members, who do not appear to have made new commitments beyond what they had already made pre-Trump.  In these respects, the Trumpian theater in Brussels is similar to the one surrounding the summit meeting with North Korean leader Kim Jung Un.

Some of Trump’s themes in the insults-and-threats phase of this performance, and especially his bashing of Germany, served specific political purposes back home.  The hyping of dangers from immigration in Europe dovetails, of course, with his exploitation of the immigration issue in the United States, an issue that, as Trump accurately remarked at the press conference, had helped to elect him.  Trump’s charge that Germany is “totally controlled” by Russia (supposedly because of trade in natural gas) is an example of the familiar Trump technique of accusing others of the very transgressions about which he is politically vulnerable.

Meanwhile, the entire performance achieved Trump’s objective of seizing media attention and setting the agenda of public discussion.  The motivation for the performance had little to do with issues of diplomacy, the state of the North Atlantic alliance, or national security.  The chief intended audience was his political base back home, in addition to his own ego.

Looking beyond the political theater, however, there are important unresolved questions about NATO, its role and purpose today, and its place in advancing U.S. interests.  The questions never were adequately addressed in the early 1990s, that historical turning point when the Cold War ended, Germany was reunited, and Western leaders decided that NATO would not go the way of the Warsaw Pact and dissolve, but instead would endure and expand.

Trump’s success in setting the agenda made the issue of military spending by the allies—dovetailing with another of Trump’s campaign themes, the idea of foreigners free-riding on the back of the United States—sound as if it were the single, overriding measure of the health of NATO.  But that raises the question: exactly what difference would military spending—at two, four, or any other percent of GDP—make to the security of either Europe or the United States? Amid all the attention the past couple of days to spending levels, the near-silence on this fundamental question was deafening.

The nightmare scenario during the Cold War was of Red Army tank divisions, from a starting point in East Germany, pouring through the Fulda Gap in an invasion of the West.  Back then, the different levels of Western military spending by West Germany and other European allies might have made a major difference in the strength of NATO’s defense against such an assault, and thereby potentially a decisive difference in whether such an attack would be deterred and, if not deterred, defeated.  But the today the strategic map of Europe looks far different. Russian troops have repaired to Russian territory, hundreds of miles to the east.

The territories of current NATO members most vulnerable to a Russian attack are the Baltic republics.  It is hard to envision how, say, an immediate increase in Germany’s military spending to two percent of GDP would make a meaningful change in that vulnerability.  Presumably any difference would rest on convincing the Russians that a wider European war—touched off by the tripwire of small NATO forces in the Baltic republics—would be costlier than it otherwise would be.  But the credibility of such deterrence involves the same uncertainties about will, and not just capabilities, that the eastward expansion of NATO always has entailed. Would German decision-makers be willing, in an effort to save Riga, to respond in a way that would endanger Berlin?

Where Russia has used military force outside its boundaries, in Ukraine and Georgia, such uncertainties are all the greater.  The willingness to take risks to save Tbilisi are no greater than with Riga. Such uncertainty was a good reason the idea of signing up Ukraine and Georgia to the North Atlantic Treaty did not gain traction.  When the topic of Russia’s seizure of Crimea came up in Trump’s press conference, he hastened to blame Barack Obama and to claim that if he had been president, “I wouldn’t have let it happen.” He gave no hint of how he would have done so, and it is a safe bet that he doesn’t have the faintest idea how he would have prevented the annexation.

If there is a persuasive case for NATO’s continued existence, it does not depend primarily on levels of military spending.  NATO has value as an institutionalization of Western standards that are more political than military. The prospect of NATO membership---like the prospect of membership in the European Union—has been an incentive to prospective members to conform to those standards.  NATO is the main instrument for U.S. influence in the security affairs of Europe. The alliance also is the main institutionalization of European support to the security of the United States—bearing in mind that the one invocation of the mutual security obligation in Article Five of the North Atlantic Treaty involved the Europeans coming to the support of the United States—after the 9/11 terrorist attacks—rather than the other way around.  It is this sense of political goodwill and solidarity that is the main value of NATO to the United States today. It is this sense that Trump, with a fusillade of insults and attacks that one senior European diplomat described as “beyond belief”, has done so much to damage.

Military spending and military forces are relevant to some out-of-area NATO activities, but again, fundamental questions need to be addressed as to the net effect of those activities on the security of either Europe or the United States.  Exhibit A is the endless war in Afghanistan, which long ago passed the point of contributing to that security.  Among other NATO operations, a small force in Iraq helped to clean up a U.S.-made mess that never should have been made in the first place, and a regime-changing operation in Libya left another mess that persists today.

The main security-related problems in Europe today, legitimately identified as concerns for NATO, cannot be addressed by spending for bigger rather than smaller armed forces.  Greater military spending also would mean fewer resources for other sorts of expenditures that would be better suited to dealing with some of those problems, especially the problem of handling migrants in ways that are fair and humane while not compromising the stability and cohesiveness of domestic society.

One of the biggest current worries among leaders of European NATO members is a growing split between those members who adhere to the liberal democratic values that undergird the alliance and those, such as the hardline nationalist regimes in Hungary and Poland, that are straying from those values. Trump’s injection of his own hardline nationalism gives even more reason to worry.

Paul R. Pillar is a contributing editor at the National Interest and the author of Why America Misunderstands the World