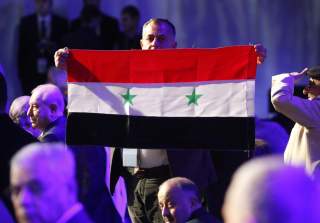 The cauldron of intervention known as the Syrian war has recently become even more likely to boil over than it was just a few weeks ago.  There are two immediate dangers of escalation.

One is the outbreak of another war between Israel and its neighbors.  A reminder of this danger has come from events that began when Israel said it shot down an Iranian drone that had entered its airspace.  Israeli F-16s then attacked a command center in Syria, during which Syrian air defenses downed one of the Israeli warplanes (a rare event for Israel).  Israel subsequently launched a much more widespread set of aerial attacks within Syria.  The Israelis have conducted scores of attacks in Syria over the last five years, but this most recent assault may have been the largest Israeli attack there since the 1980s.

A new war involving Israel would surely also involve Lebanese Hezbollah.  There is no indication that Hezbollah seeks such a war.  The group has incurred significant costs by participating in fighting within Syria and has many wounds to lick.  Its leaders still have regrets about the brinksmanship that last got Hezbollah entangled in a war with Israel.  Even though it could get in some hits with cross-border rocket fire, the group’s leaders know that in a new clash it would get badly bloodied by its militarily more capable foe.

The inclinations of the Israeli government are less apparent.  Its clear military superiority would make it the winner on most scorecards in a new war.  The Israeli itch to escalate was in full view this past week.  The reported Iranian drone did not, according to the Israeli account, get off a shot, and it may not even have been armed.  A fresh war with Iran’s ally Hezbollah also would serve for the government of Benjamin Netanyahu the purpose of emboldening anti-Iran U.S. hawks and rallying them to isolate and punish Iran even more, perhaps tipping the Trump administration into repudiation of the agreement that restricts Iran’s nuclear program.

An added wild card are the corruption allegations against Netanyahu and the possibility he would use a foreign clash to divert attention from the scandal and shore up his domestic political position.  The veteran Israeli commentator (and critic of Netanyahu) Uri Avnery writes, “When the police chief hinted on TV about the coming police decision to recommend indictment, my first impulse was to rush and clean the air-raid shelter at my home.  When you are prime minister and in deep domestic trouble, the first thing you think about is a military crisis.”

The other current danger is on the northern side of Syria, where there is a significant chance of proxies of the United States and maybe even U.S. troops clashing directly with the forces of a fellow NATO member, Turkey.  The source of the standoff is the accurate U.S. view that a Kurdish militia involved has been among the most effective fighters against Islamic State (ISIS), and the Turkish view, also accurate, that the Syrian Kurds in question are organizationally tied to the PKK, the Turkish Kurdish group that has waged terrorist campaigns and large-scale insurgency against Turkey.  Secretary of State Rex Tillerson’s just-completed talks in Ankara appear to have cooled things a bit for the moment, but the underlying cause of the tension has not been resolved.  Don’t expect the Turks to budge much on this one.  To get an idea of how they feel, imagine that some foreign power was supporting in an enclave in northern Mexico rebels who were tied to insurgents who had tried to separate a chunk of the southwest United States while conducting terrorist campaigns against U.S. targets.

To deal with both these problems and to avoid the substantial damage that eruption on either of these fronts would cause, two realities need to be recognized.  One is that the ISIS caliphate has been defeated.  One hears from U.S. officials much talk about how that last two percent of ISIS-held territory needs to be recaptured, but this perspective makes the mistake of treating the problem of this group as if it were exclusively a military problem of seizing ground.  When ISIS had a mini-state holding much Syrian and Iraqi territory, it was indeed in part such a military problem.   But the mini-state is no more.  ISIS is now more of a traditional international terrorist group, and dealing with it requires more traditional counterterrorist methods.  To give disproportionate priority to that last two percent of soil—and, in the interests of capturing it, to do things like maintaining proxy militias that cause other problems—involves passing a point not only of diminishing returns but of counterproductivity as far as counterterrorism is concerned.

Another reality, less comfortable to accept than ISIS being defeated, is that the Syrian regime, with the help of its Russian and Iranian supporters, is the winner of this civil war.  Given the divisions and ineffectiveness of the Syrian opposition and especially the supposedly moderate parts of it, there probably was never much of a chance for a different outcome.  Now, there certainly is no such chance.  For an outside intervenor such as the United States to continue, either directly or through proxies, to try to keep control of a piece of Syrian territory becomes a Western equivalent of the Russians continuing to muck around in the Donbass region of Ukraine.

As a sovereign state, Syria can choose its friends.  And none of the main facts about this regime or its alliances are new.  Not only have the Assads been around for decades; so too have been the ties between Damascus and both Moscow and Tehran.  And during these decades the Assad regime, with its Russian and Iranian support, has been for Israel the devil it has come to know—with Israel enjoying a remarkably quiet frontier, notwithstanding its occupation of a piece of Syrian territory.  It has continued to enjoy this, despite the war raging within Syria.  The shots fired across the frontier have been almost all from Israel into Syria, not the other way around.

To do its part in avoiding a boiling over, the United States should stop its Donbass-like effort to keep a piece of Syria under the control of itself or its proxies.  There is no justification for continuing this effort in terms either of what is most needed to minimize ISIS terrorism against Western targets or what would induce the other players in Syria to de-escalate or disengage.  The United States should do what the Trump administration has not been doing so far, which is to participate in serious, inclusive, multilateral diplomacy aimed at containing and damping down the Syrian conflict.  It has left most of the diplomatic action to Russia, Turkey, and Iran.

A comprehensive resolution of the Syria conflict may well be out of reach for the time being, but more feasible would be adjustments, redeployments, and tacit limitations that reduce the chance of explosive escalation.  Damascus, Moscow, and Tehran all have firm bottom lines on what they see as their core interests in Syria, but they probably are flexible on some matters outside the core that make the Israelis (or the Turks) nervous.  Such matters might include the specific positioning of forces within Syria or activities such as manufacture of munitions.  Neither Russia or Iran has an interest in endless, let alone escalating, warfare in Syria, no matter how strong are their basic interests in maintaining political and security ties to Syria.

Adjustments and limitations cannot be all in one direction.  Avoidance of escalation requires Israel to move away from its penchant for seeking absolute security even if this means absolute insecurity for someone else, and for launching airstrikes at the mere possibility that someone else might try to acquire a capability that Israel already has.  The journalist Ronen Bergman reports that a “furious phone call” last weekend from Russian President Vladimir Putin dissuaded Netanyahu from an even greater military escalation than the one in which Israel indulged.  It is interesting that such a message came from Russia.  Now would be a good time to test whether $3.8 billion in annual U.S. aid to Israel buys any influence at all.  Some furious phone calls from Washington would be in order.

Image: A participant holds a Syrian flag as he attends a session of the Syrian Congress of National Dialogue in the Black Sea resort of Sochi, Russia January 30, 2018. REUTERS/Sergei Karpukhin