Netanyahu Makes a Case for the JCPOA 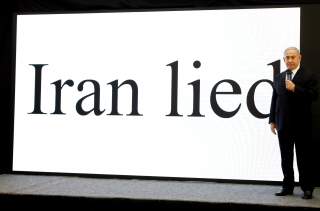 Benjamin Netanyahu’s display of a cartoon bomb before the United Nations General Assembly nearly six years ago received much ridicule but at least was grounded in some facts about uranium enrichment levels and how they relate to the ability to make a nuclear weapon. These days, Netanyahu doesn’t reprise that part of his General Assembly speech, and it’s not because of the ridicule. It is because the Joint Comprehensive Plan of Action (JCPOA)—the multilateral nuclear agreement that restricts Iran’s nuclear program and that the Israeli prime minister has been trying hard to kill—has drained Netanyahu’s bomb. In fact, Netanyahu’s diagram, despite its cartoonish quality, could serve as a prop in illustrating how the JCPOA has moved Iran far away from any capability to produce a nuke by strictly limiting enrichment levels and limiting even the amount of low enriched uranium it can possess.

In continuing his agreement-killing campaign this week with another prop-dependent show-and-tell, Netanyahu has abandoned any effort to be logical in arguing against the JCPOA. He abandoned logic some time ago with regard to how the agreement relates to Israel’s own security interests. Of course it is in those interests to close all pathways to a possible Iranian nuclear weapon, as the JCPOA has done and as retired senior Israeli security officials have repeatedly stated in urging that the agreement not be killed. Netanyahu’s latest presentation displayed shelves of binders and CDs, which the prime minister described as containing documents relating to past Iranian work on nuclear weapons and being copies of files that are allegedly squirreled away somewhere in Iran. Evidently the display was intended to overwhelm the senses through the sheer volume of stuff. Indeed, the volume was greater than other well-known displays of binders that come to mind. Netanyahu’s central message was that Iran “lied” about its past work on nuclear weapons.

None of this is new. The parts of the U.S. government charged with keeping track of such things assessed formally and publicly more than a decade ago that Iran had an active and undeclared nuclear weapons program that it halted in 2003. The International Atomic Energy Agency (IAEA) also has been actively seized with this issue, consistent with the responsibilities that the JCPOA placed on it. This became known as the “possible military dimensions” (PMD) issue and received much attention during the negotiation of the JCPOA. The IAEA prepared a report on PMD in December 2015, subsequently approved by the IAEA Board of Governors, that concluded that Iran had a “coordinated effort” prior to 2003 to develop a nuclear device, that “some activities” took place after 2003, and that the agency has “no credible indications of activities in Iran relevant to the development of a nuclear explosive device after 2009.”

Why the JCPOA is Needed

The history of secret Iranian work related to nuclear weapons design is all the more reason to keep the JCPOA and is why the agreement was designed as it was. It is an agreement for doing business with a state that has lied and kept secrets, not one that is entirely honest and trustworthy. This was the reason not only for the tight restrictions on enrichment and other nuclear activities but for the establishment of a highly intrusive regimen of inspections and monitoring by IAEA inspectors. The JCPOA provides not only for regular monitoring of declared nuclear sites but also for inspection of any other locales in Iran if the IAEA is given reason to suspect any prohibited activity. If Netanyahu really were interested in ensuring there is no Iranian nuclear weapon—rather than putting on a television show to try to kill the agreement—he would provide his material to the IAEA (which, as far as we know, may already have it) to be checked out. As the office of European Union foreign affairs chief Federica Mogherini tweeted, "IAEA is the only impartial international organization in charge of monitoring Iran’s nuclear commitments. If any country has information of non-compliance of any kind [it] should address this information to the proper legitimate and recognized mechanism."

Netanyahu, Trump, and the other American players inside and outside his administration who are intent on killing the JCPOA, while dispensing with logic, are relying on emotion and confusion to try to achieve their objective. Netanyahu’s theme of Iran lying serves partly as innuendo that will lead some people to believe that Iran somehow is violating the JCPOA, even though it isn’t. The IAEA has repeatedly certified that Iran is living up to its obligations under the JCPOA. (Holding files is not a violation of the agreement.) The violations so far are all on the U.S. side. The emotion part involves getting people angry in general about Iran and relies on a popular misconception that the JCPOA is some kind of reward or act of generosity to Iran rather than a restriction on, and evidence of mistrust of, Iran.

Among Netanyahu’s motives for trying to destroy something that is in Israel’s own security interests is to distract attention from the destructive effects of his own government’s policies and to levy all blame for any regional bloodshed and instability on Iran by keeping it a pariah. The destructive effects in question keep accumulating, and the past few days are no exception. There is the Israeli military’s lethal use of force against Palestinians demonstrating against their confinement in the miserable conditions of the Gaza Strip. There are the lethal Israeli air and missile strikes in Syria, which over the past year or two have numbered in the dozens as compared to a single drone in the other direction that did not fire a shot.

The Israeli government’s vigorous opposition to any agreement with Iran also helps to preclude an American straying from the passionate attachment to Israel, which in practice on many issues has meant attachment to the Israeli government and its policies. If Secretary of State Mike Pompeo’s just-concluded visit to the region is any indication, Netanyahu need have no worry about that with the current U.S. administration. Pompeo’s remarks—on Iran, on Syria, on Gaza—could not have been more pleasing to the prime minister’s ears if Netanyahu’s own staff had written the talking points. Such remarks represent prioritizing the passionate attachment over an independent pursuit of U.S. interests and over the interests of regional stabilization and nuclear nonproliferation.

One closing observation concerns the irony of exactly who is energetically accusing another regime of lying about activities related to nuclear weapons. The accusations are coming from the prime minister of a state that has long asserted that it would not be the first to introduce nuclear weapons into the Middle East—an assertion that almost no one in the region believes.

Another closing observation concerns the folly of destroying the JCPOA given that this would mean, among other things, an end to the intrusive international inspections that are critical to running down any suspicions about Iran conducting prohibited activity. The last time, which was fifteen years ago, that a U.S. administration kicked out of a Middle Eastern country international inspectors who were getting to the ground truth about alleged weapons of mass destruction activity, it was a prelude to a long, costly, and highly destabilizing war.