A New Decision to Go to War in Syria 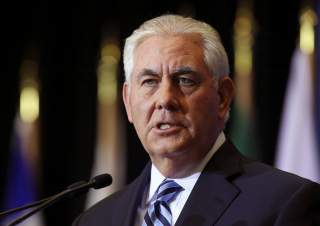 Behind a façade of continuity, the deployment of U.S. armed forces in Syria for the purposes that Secretary of State Rex Tillerson described in a speech this week represents a departure from what such forces were originally sent to Syria to do.  The Trump administration is having U.S. troops participate indefinitely in someone else’s civil war, for reasons that are quite different from the original stated objective of helping to quash the so-called caliphate of the Islamic State (ISIS).  The new reasons do not stand up to scrutiny in terms of defending any threatened U.S. interests.  The administration has in effect made a decision to immerse the United States in yet another foreign war.

The territorial presence—the mini-state—that ISIS created in Iraq and Syria provided the occasion for the use of military force in going after the group.  Many terrorist groups do not present good military targets.  This one, because of the mini-state, did.  But the mini-state is no more.  Tillerson himself correctly said, “Today, nearly all territory in Iraq and Syria once controlled by ISIS, or approximately 98 percent of all of that once United Kingdom-sized territory, has been liberated, and ISIS has not been able to regain one foot of that ground.”  ISIS can still cause trouble as a more traditional terrorist group and as an inspiration for jihadist violence.  But as a military target, it has lost.  The appropriate U.S. response to that defeat, given what was supposed to have been the mission of U.S. forces in Syria, would be to declare victory and go home.

Tillerson tried to make a case for an extended U.S. mission, partly by resurrecting the now-familiar assertion that the United States had made a “premature departure” of its troops from Iraq several years ago.  As with the other times this assertion has come up, the secretary did not mention that the group that became ISIS did not exist prior to any U.S. troops entering Iraq, and that the group emerged as a direct result of the U.S. invasion and the ensuing internal war.  Nor did Tillerson address how a continued modest troop presence could have done what an earlier U.S. military presence in Iraq of 160,000 troops could not do.  Nor did he address how the George W. Bush administration, which negotiated the troop withdrawal agreement, could have done anything substantially different in the face of strong Iraqi government resistance to extending the U.S. military presence.

Of course, in Syria, the presence of the U.S. military has never had any concurrence at all from the incumbent government.  As the Russians never tire of reminding people, this makes the U.S. military presence different from those of Russia and Iran, and it means the U.S. presence has no basis in international law.

Tillerson also tried to retain an ISIS-relevant basis for extending the U.S. presence by linking the Syrian regime to the group.  It is true that in earlier stages of the Syrian civil war the regime was fighting less against ISIS than against other Syria opposition groups, mostly as a reflection of geography and of who posed an immediate threat to the more heavily populated regime-controlled areas in the western half of the country.  And the regime was happy to make the propaganda point that it was a bulwark against such an abhorrent terrorist group.  But that was then, and now is something different.  The Assad regime and ISIS are on opposite ends of any political or religious spectrum imaginable.  They are enemies.  To the extent that ISIS still threatens to have an impact in Syria, the Syrian regime has at least as much of an incentive as anyone else to eliminate that threat.

Any persistence of an ISIS threat in Syria will be less a function of a continued Assad regime than of a continued Syrian civil war.  It was the war that gave ISIS a big boost a few years ago.  It is the war that continues to breed the conditions that an extremist group—whether ISIS, al-Qaeda, or some other—can exploit.  The U.S. policy course that Tillerson described, which includes not only the direct U.S. military presence but also the building up of a client militia, is a prescription for continuation of the war.  The secretary said what one would expect the chief U.S. diplomat to say regarding the importance of resolving the conflict, but U.S. diplomacy has been playing at most a backseat role.

The U.S. military expedition in Syria is now, according to Tillerson’s own words, aiming at three other things at least as much as anything having to do with ISIS or terrorism.  First, the notion of regime change lives.  Tillerson was explicit about that, saying that stability in Syria “requires post-Assad leadership” and that the United States will discourage every other nation from having any economic relationship with war-torn Syria until Assad has gone.  Nowhere did the secretary explain why the end of a regime that, under Hafez as well as Bashar Assad, has been in power for 48 years should suddenly have become such a U.S. objective.  Nor did he explain how, given that Assad, with the help of his Russian and Iranian supporters, has clearly shorn up his regime’s position, what Tillerson prescribes will mean anything other than prolonged instability and confrontation in Syria.

Second, as with anything the Trump administration mentions about the Middle East, there is always the bogeyman of Iran.  And as usual, Iran is described in general pejoratives—the lead adjective on the subject in Tillerson’s speech was “malignant”—without addressing exactly how Iran’s position in, and relationship with, Syria threatens any U.S. interests.  Nor was there any recognition of the inconsistency of justifying a U.S. military intervention that was supposed to be about opposing ISIS by talking about malignancy on the part of a regional power that itself has been opposing ISIS, in Iraq and well as Syria.

Third, whenever there is a U.S. mention of Iran, the government of Israel cannot be far away.  And indeed, Tillerson said, “Iran seeks dominance in the Middle East and the destruction of our ally, Israel. As a destabilized nation and one bordering Israel, Syria presents an opportunity that Iran is all too eager to exploit.”  Of course, the United States and Israel have no mutual assistance security treaty.  Nor did Tillerson suggest anything the United States would get out of doing Israel’s desired work in Syria.  He also did not mention that Israel has the most powerful military in the Middle East and that any thought of Iran trying to achieve “destruction” of Israel, from Syria or anywhere else, is something between folly and fantasy.

Besides helping to prolong war and instability in Syria, the course Tillerson describes is a prescription for increased trouble within real alliances.  He said, “We must have Turkey’s close cooperation in achieving a new future for Syria,” without mentioning how the client-arming scheme in northern Syria is anathema to the Turks.  So now we face the spectacle of Syria becoming the theater for a proxy war between two members of NATO.

The administration’s new policy is launched with disregard for the role of the U.S. Congress in authorizing the overseas use of military force.  For the past decade and a half, U.S. policy through three administrations has stretched the applicability of Congressional resolutions centered on countering terrorism.  Notwithstanding Tillerson’s words about a continued concern with ISIS, the new objectives in Syria turn the stretch into a break.  The United States is putting its forces at war overseas to try to overthrow one Middle Eastern regime, to confront a second one, and to do the bidding of a third.  None of those objectives involve combating terrorism, and none of them have been authorized as a mission for U.S. armed force by Congress.

It's not clear exactly how this posture on Syria evolved and who had leading roles constructing it.  But it is a far cry from the impression candidate Trump once gave that he favored contracting missions for U.S. armed force overseas rather than expanding them.