A Nuclear Standard for Saudi Arabia 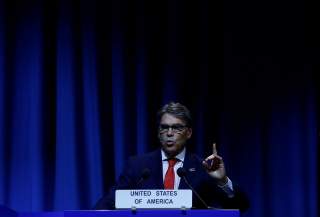 Later this week Secretary of Energy Rick Perry will lead a U.S. delegation to negotiate a possible nuclear cooperation agreement with Saudi Arabia.  The subject already has been a point of contention between Riyadh and Washington.  Saudi Arabia wants to establish a large-scale nuclear power program and also wants to be free to engage in nuclear activities such as enrichment of uranium and reprocessing of spent reactor fuel.  The United States has instead seen as a model an agreement it reached several years ago with the United Arab Emirates.  In that accord, the UAE agreed to forgo enrichment and reprocessing in return for getting from the United States nuclear material, equipment, and know-how.

Each side has understandable reasons for its position.  What is needed is an appropriate external standard as a reference point for the negotiations.  The UAE agreement is one reference point, but not the only one.  Another is in place just across the Persian Gulf: the Joint Comprehensive Plan of Action (JCPOA), the multilateral agreement that restricts Iran’s nuclear program and has been successfully in operation for a couple of years.  Rather than being an impediment to negotiations with the Saudis, as some have contended, its usefulness as a reference point can aid the negotiations.  The laboriously negotiated JCPOA is one of the most significant agreements on behalf of nuclear nonproliferation, and it contains some of the most stringent restrictions that any state with an ongoing nuclear program has ever accepted.  The Saudis would have no logical complaint if they were to become party to an agreement exactly like the one their cross-gulf rival signed up to.

“Exactly” means exactly that, and the Saudis would have to think hard about going in that direction.  A JCPOA-like agreement would mean no indigenous reprocessing, with all spent reactor fuel to be shipped out of the country.   It would mean severe restrictions on any uranium enrichment, in terms of both the level of enrichment and the amount of material enriched.  It would mean a highly intrusive inspection regime, in which international inspectors would not only have continual and full access to nuclear facilities but also could inspect military bases or other places if they had any reason to suspect nuclear-related activities taking place there.

An arrangement exactly like the one applicable to Iran also would mean no U.S. help in building a nuclear program.  Most of Iran’s program, including the uranium enrichment part after an initial boost from the nuclear entrepreneur A. Q. Khan, the Iranians built themselves—with impediments and interference, more than help, from outsiders.

An obvious way for U.S. negotiators to frame the bargaining space follows from all this.  The Saudis can be given a choice.  If they want the kind of help one of their neighbors, the UAE, has gotten in building its nuclear program, then they will have to accept the same restrictions the Emiratis have accepted.  If the Saudis reject those restrictions, then there is the alternative, still very restrictive, JCPOA model, which another of their neighbors, Iran, has accepted.

The absence of U.S. help in the latter model does not mean an absence of possible help from other foreign powers.  But that is where another attribute of the JCPOA comes in: its multilateral nature.  Five other powers are parties to that agreement.  None of them wanted Iran to become a nuclear weapons state, and presumably none of them want Saudi Arabia to become one either.  Russia has been a supplier of power reactors to Iran, but has slow-rolled the project to the point of considerable Iranian dissatisfaction.  China is always seeking new markets, although the Saudis probably ought to be prepared to hear as many Chinese sales pitches about solar panels as about nuclear reactors.  With Saudi Arabia’s sun and empty sand, solar makes more sense than nuclear as a non-hydrocarbon source of power.

Of course, adoption of such a U.S. negotiating strategy would require President Trump to drop his undo-anything-Obama-did desire to destroy the JCPOA, and there is no sign that he will.