Nuked: Does 'Napoleonic War' Have a Future? 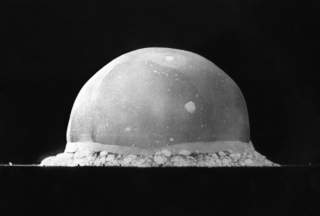 Across much of the globe, the First World War—“the war to end all wars”—still exercises a fierce hold on popular imagination. And many aspects of the war remain a subject of debate, more so than the Second World War, for example, where the revisionist agendas of Germany, Italy and Japan were more fully exposed. Some of the flavor of that debate runs through the tranche of historical studies produced over recent years as the war’s centenary approached, including Hew Strachan’s The First World War, Margaret MacMillan’s The Year that Ended Peace, Christopher Clark’s The Sleepwalkers, and Paul Ham’s 1914: The Year The World Ended. I’m not proposing to explore those debates here. Rather, I want to consider where the First World War stands in relation to the Napoleonic model of war, and what that means for us today.

Napoleon exploited the age of revolution to bring mass to the modern battlefield. But his mass was principally one of manpower. Using the levée en masse—conscription—and adroit generalship, Napoleon searched for decisive battles where the enemy army could be defeated at its strongest point, and the war won. That approach worked while the battlefield remained the center of gravity in strategic contests. But his opponents also deployed larger armies. And even the Grand Armée was no match for the territorial vastness of Russia.

Great social and economic changes unfolded in the century between the end of the Napoleonic wars and the onset of WWI. Industrialization magnified the firepower available on the battlefield. Rifles, machine guns and artillery pieces took the place of muskets and cannons. The battlefield became a much more dangerous place. Mass was still being brought to the battlefield, but now as machine and motor as well as manpower.

The expansion in both size and strength of national armies made the search for decisive battles much more challenging. And, as they had in the US Civil War, trenches, machine guns and barbed wire typically gave defensive positions pre-eminence on the battlefield, at least until 1918. The cult of the offensive still sat at the heart of European military thinking—but offensives required unprotected soldiers to cross-exposed ground in the teeth of such firepower.

Because national industrial capacity was itself now a key enabler, temporary victory upon the battlefield became harder to exploit. The true ‘battlefield’ now included the home front—national will, industrial capacity and an efficient logistics train to keep supplies moving to the line of actual engagement. Paralysis at the front line enhanced the importance of the home front. War became an exercise in national attrition, not decisive battles.

WWI didn’t represent the zenith of mass war. That was WWII, of course, which killed over 50 million people and ended with two nuclear detonations over cities. By then war was an exercise in mechanized maneuver, not trenches and stasis. And the concept of the battlefield had truly stretched to include whole nations. But WWI was bad enough: it killed over 16 million and wounded another 20 million. And its endgame—the Treaty of Versailles—indirectly set the stage for WWII.

Some say it was the cataclysm that made possible all the other cataclysms of the 20th century. Was there an upside? Yes. We can’t re-run history, of course, but I suspect losing the war would have been considerably worse than winning it. That’s what Hew Strachan calls “the biggest paradox” in our understanding of the war: “On the one hand it was an unnecessary war fought in a manner that defied common sense, but on the other it was the war that shaped the world in which we still live.”

Does Napoleonic war have a future? Perhaps. Many countries have moved on from the notion of the citizen soldier. Amongst advanced militaries—and societies—the preference is for precision-strike, not massed armies. One-child Western families shrink from the concept of mass casualties that sits alongside the idea of mass war. And nuclear weapons have put a cap on most escalation ladders precisely because they’re so destructive. It’s hard to ‘out-mass’ a nuclear-armed opponent—though the nuclear arms race during the Cold War shows two superpowers were certainly prepared to give it a try. Various modes of warfare still flourish below the nuclear threshold, of course. And some argue we’re approaching a “fourth generation” of warfare that will have its basis in ideas rather than technology.

Still, those factors don’t bear down equally on all players in the international system. And a waning of the Napoleonic paradigm, especially in the West, doesn’t mean that major war itself is obsolete. Indeed, military force remains an important variable in today’s international relations. Great powers still jostle for position, even nuclear-armed ones. War—at some level—between nuclear-armed powers is possible, even if it’s not likely. Occasions may yet arise when the pursuit of politics by other means require us to put Australian soldiers in harm’s way.