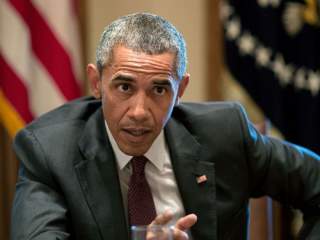 Jeffrey Goldberg's long article in the Atlantic about Barack Obama's thinking on America's foreign relations, an article derived from a series of interviews that Goldberg had with the president, ought to be required reading for this year's presidential candidates and those who wish to advise the next president on foreign policy. It ought to be so because it lays out some splendidly clear and well-grounded realist principles, expressed by Mr. Obama more directly and in more complete form than we customarily hear or read, and that would form the core of sound foreign policy for the United States to the extent that the U.S. political milieu would permit them to be put into practice. Also emerging from the interviews, besides the realist approach, is deep substantive insight by Mr. Obama into the nature of some of the principal security problems of the day and a disciplined and unemotional approach toward analyzing those problems, both of which also are critical ingredients to the formulation of sound foreign policy. The article is not a puff piece written in return for extraordinary access given to the journalist, and Goldberg does not write such puff pieces anyway. Some of what Goldberg writes in this piece exhibits aspects of common Washington thinking that President Obama has been trying to get away from. But Goldberg deserves credit for letting the president's thinking come through fully, mostly in the president's own words, and for assembling in one place a portrait of a presidential outlook of which we usually only get fragments in press conferences.

The overall realist direction of that outlook is reflected in Mr. Obama's professed admiration for the approach toward foreign policy of George H.W. Bush and Brent Scowcroft. Goldberg tells of how when then-Senator Obama was writing the book that would become a campaign manifesto, his adviser Susan Rice had to urge him to include some complimentary words about Bill Clinton's foreign policy to balance the praise for Bush and Scowcroft. The principal tenets that can be described as realist principles and that come across most clearly in the interviews with Goldberg are the following.

Deal with the world as it is, not as we wish it were. The first step to being a realist is to be realistic. In the discussion of current front-burner issues that dominate the interviews with Goldberg, this principle certainly applies to the wishful and what-if thinking that is all too common regarding the civil war in Syria, and specifically to the myth that only if the United States had done something more earlier, Syria wouldn't be such a mess. The president points out that this war pitted from the beginning a professional army that was well armed and supported by two outside allies against a fractured and ragtag rebellion. He correctly observes, “The notion that we could have—in a clear way that didn't commit U.S. military forces—changed the equation on the ground there was never true.”

Address specific problems and avoid specific mistakes, rather than subordinating everything under general labels. The strong urge among the commentariat and foreign policy cognoscenti in Washington to talk about foreign policies in terms of a “doctrine” attached to the name of a particular leader or a single “organizing principle” is an unhelpful oversimplification. Even what is usually called grand strategy, although it has its role, tends to get used and overused in unhelpful ways. Goldberg's article itself reflects the labeling urge by being misleadingly titled “The Obama Doctrine”. The world is complicated, and any foreign policy approach that can be simplified to a label or even to a strategy expressed in a single sentence is an oversimplification. Not doing stupid stuff is one (but not the only one) important thing to remember in making foreign policy, bearing in mind how severely U.S. interests have been damaged in the past because stupid stuff was done.

The preceding two concepts are related to a third: adapt to the differences in different situations. Not every troublesome dictator is a Hitler, and not every conflict in which civilians die is a Rwandan genocide. The tendency that has to be countered here is perhaps best represented within the Obama administration by Samantha Power, who sometimes does seem to think that every conflict with civilian casualties is another Rwanda and was one of those who argued especially hard for the mistaken intervention in Libya. (Goldberg writes of how during one meeting in which Power was pushing her theme the president had to shush her, saying “I've read your book, Samantha.”) In his comments to Goldberg, the president accurately contrasted Rwanda, where he said “it's probably easier to make an argument that a relatively small force inserted quickly would have resulted in averting genocide,” with Syria, where “the degree to which the various groups are armed and hardened fighters and are supported by a whole host of external actors with a lot of resources requires a much larger commitment of forces.”

Pay heed to geopolitics. This is closely related to the specific need to take full account of how other states view their interests and the relative priority they place on those interests—and thus to what extent those states are or are not amenable to changing their policies. As basic a variable as geographic distance has a lot to do with how interests are defined. This applies to Mr. Obama's analysis of Middle Eastern problems, in which Middle Easterners themselves have a bigger stake than anyone else. It also applies to his perspective on Ukraine; he understands that Ukraine involves core Russian interests but not core American ones, and therefore Russia will always have escalatory dominance there.

Recognizing a problem is not the same as being able to solve it. The all-too-common notion that must be resisted here is one that flows from overoptimistic American exceptionalism. It is a notion that often leads to assumptions that if a situation is identified as a problem then that means it must be “the policy” of the United States to eliminate it somehow. It is the notion that, in President Obama's words, “if we use our moral authority to say 'This is a brutal regime, and this is not how a leader should treat his people,' once you've said that, once you do that, you are obliged to invade the country and install a government you prefer.” As the president correctly observes, “There are going to be times where we can do something about innocent people being killed, but there are going to be times where we can't.”

Solving a problem does not necessarily mean it is the United States that should do most of the work in solving it. This is another tendency rooted in American exceptionalism. It is a tendency that causes free rider problems, which Mr. Obama explicitly wants to avoid. It does not serve U.S. interests for, as he says, the Europeans and Arab states to be “holding our coats” while the United States does “all the fighting.”

Trade-offs and hard choices are unavoidable. Not all good things go together, not all important U.S. interests will be well-served by any one policy option, and not all problems can be solved with the same resources. In defining himself as a realist the president said, “we have to choose where we can make a real impact.”

States have no permanent friends or allies, only permanent interests. Lord Palmerston's dictum applies just as much to the United States of today as it did to the Britain of his day. President Obama rightly looks beyond the usual ways, sustained by habit and political lobbies, of categorizing other states as allies or adversaries and considers what each state is actually doing for or against U.S. interests, while recognizing that each state is likely to present a mixture of both. Not being stuck in the usual habit means not needlessly taking sides in other people's quarrels. He says, for example, that the Saudis need to “share” the Middle East with their Iranian rivals. As he explains, “An approach that said to our friends 'You are right, Iran is the source of all problems, and we will support you in dealing with Iran' would essentially mean that as these sectarian conflicts continue to rage and our Gulf partners, our traditional friends, do not have the ability to put out the flames on their own or decisively win on their own, and would mean that we have to start coming in and using our military to settle scores. And that would be in the interest neither of the United States nor of the Middle East.”

Besides realist principles for addressing any set of problems, the president's interviews with Goldberg demonstrate a sound substantive understanding of leading current problems. This is partly a matter of accurately perceiving relative importance—that “ISIS is not an existential threat to the United States,” for example, while “climate change is a potential existential threat to the entire world if we don't do something about it.”

It also is a matter of insight into the underpinnings of any one problem. When Goldberg asked the president a question, having to do with ISIS and insecurity in the Middle East, that made reference to Thomas Hobbes, Goldberg acknowledged that he probably would get laughed out of the room by his fourth estate colleagues if he were to ask the same question at a presidential press conference, where the more accepted way to address such subjects would be—to quote a question actually asked at one such recent press conference—“Why can't we get the bastards?” Mr. Obama responded fully to Goldberg's version of the question with a reply that touched among other things on trends in social order, what causes order to break down, the influence of tribal affiliations, the stresses associated with globalization, and how extremist groups take advantage of such stresses. It was an answer that indicated profound understanding of the roots of much of what constitutes security problems in the Middle East today.