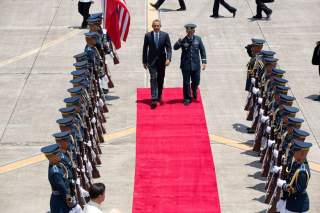 President Obama has been having a rough summer, reflected in poll numbers that are as low as they have been during his presidency. Clearly a concatenation of developments overseas that appear to most Americans to be to some degree threatening accounts for much of the sour public mood and the broadsides being directed at the president and his administration for how they have responded to those developments. Go beyond the broadsides and look at specific available policy options, however, and one quickly sees that this negativity is not primarily the consequence of Mr. Obama's policies. In the public debate there is a surplus of dissatisfaction being expressed about nasty happenings abroad and a shortage of constructive ideas about what the United States can or should do differently about such happenings, much less any analysis about all the ramifications of trying to follow any conceivable alternative course. Typical of the complaining and criticizing is, for example, a Washington Post editorial the other day that bemoans what it labels as “big holes” in the administration's Middle East strategy but whose recommendation is basically, well, to do something more about regional problems such as ISIS and preferably something forceful.

Issues of Mr. Obama's style and salesmanship are partly, though only partly, to blame for the negativity. A meticulous and careful (and sometimes necessarily time-consuming) approach to policy-making is good for making good policy (and is much more likely to turn out good policy than the no-process, go-by-the-gut approach that Mr. Obama's predecessor applied to some major issues), but it doesn't sell very well. The president also hurt himself with his verbal gaffe about not yet having a strategy—a line that could have been written in the war room at the Republican National Committee.

The negativity is partly a function of the domestic political season, although only slightly so because in American politics today every season is a hyperpartisan political season. We may be seeing slightly more broadsides about foreign affairs than we otherwise would have from the president's political opponents because opponents who thought they could base an entire political campaign on berating Obamacare have had to confront increasing evidence that the Affordable Care Act is actually working rather well.

A more valid, as well as being the biggest and broadest, explanation for how this president has become a punching bag for so much of the current discourse about foreign affairs involves where history has happened to place Mr. Obama on the ever-changing American continuum of assertiveness vs. retrenchment, and where history also has placed him in this regard in the ever-changing push and pull between presidents and the American public. The historical role for some presidents has been to energize into action overseas an American public that was not especially inclined to be energized in this way. Franklin D. Roosevelt's role in the months leading up to the U.S. entry into World War II—before the attack on Pearl Harbor sealed his case—is a leading example. Mr. Obama's necessary role is in many ways the opposite: to keep a nation that is energized to do some stupid things from actually doing them.

Although the blunder of the Iraq War and fatigue with the war in Afghanistan are still reflected in poll numbers showing most of the American public disinclined to get immersed in another Middle Eastern war any time soon (and in this respect the president has been acting in accord with public preferences), two developments in particular have provided the stimulus and the energy to do more things and do more forceful things, and to express impatience with Mr. Obama for holding the anti-stupidity reins as tightly as he has. One is the Ukrainian crisis, along with all of Vladimir Putin's shenanigans, which has gotten Cold War juices flowing in the veins of people who do not stop to realize how this isn't really the Cold War any more. The other development is the dramatic rise of ISIS and its bone-chilling behavior, which has gotten post-9/11 juices flowing in many Americans who are uttering “if we don't stop them over there we will surely face them here at home” platitudes without realizing the lack of basis for such fears.

Barack Obama carries the heavy burden not only of reining in such amygdala-driven responses but of having to do so amid an asymmetric debating environment in which the side favoring doing more or doing something more forceful always has a rhetorical advantage over the side favoring restraint. This means the president gets little benefit, as a counterweight to the “do more” broadsides, either from the general public reservations about involvement in another war soon or from more specific criticisms from his left flank that he already is doing too much kinetic stuff such as drone strikes.

The rhetorical asymmetry has several bases. One is the mistaken habit of thinking of strong leadership as always involving doing more rather than doing less, and especially doing more visible and especially more forceful things. That is an unfortunately skewed view of true leadership, which does not entail that type of bias regarding action vs. restraint.

Another basis is the greater appeal of being seen to meet a threat rather than being seen to stand back in the face of a perceived threat. Careful consideration of the extent to which a perceived threat is real, or of whether a threat is dire enough to sustain severe costs in trying to counter it, or whether any specific effort to counter it may turn out to be counterproductive, always carry less weight in public debate than the simple theme of meeting and defeating a threat.

The simplicity vs. complexity distinction is in a broader sense another big part of the rhetorical asymmetry. It is why much of the criticism of President Obama is (even without being exacerbated by verbal gaffes of his own) phrased in terms of his supposedly not having a “strategy” or “organizing principle.” Having a “strategy” or being”strategic” always sounds good, no matter whether or not there is any specific substance in the minds of those who utter such terms. Stanford historian David Kennedy put this phenomenon nicely into perspective when he observed, “It's difficult virtually to the point of impossibility to have a grand strategy in a world that is so fluid and in which we no longer yield the power we once had. In a sense that is Obama's strategy, a recognition of that fact.”

The complexities do not have the rhetorical appeal but they are often what matter most in determining whether a U.S. initiative is going to be a success or a fiasco. With regard to Middle Eastern problems involving ISIS, Tom Friedman aptly described those problems as being inextricably embedded in not just one but several civil wars. U.S. involvement means taking sides in those civil wars, and that means making new enemies and eliciting more unfavorable reactions against U.S. interests.

Yet another foundation of the asymmetry that applies uniquely in the United States is the American exceptionalist tendency to view just about any significant problem in the world as a U.S. responsibility, and to believe that the United States, with the right policies, ought to be able to solve or resolve just about any problem in the world. That never actually has been the case, and certainly is not today. Kennedy notes, “There's an expectation especially since World War II that the United States and the president in particular can command events. That not true and less true today than ever.” The tendency to make world events at large a part of the incumbent U.S. president's report card is not unique to Mr. Obama, but it is worth noting that except for Libya the messes he is having to deal with are not of his own making.

Whatever good luck Barack Obama may have had earlier in his life that helped get him to the White House, it has been offset by some significant bad luck once he got there. At the beginning of his presidency he was given an awful legacy, including the biggest economic downturn since the Great Depression, a soaring budget deficit, and a foreign war that was not only one of the biggest blunders in the history of U.S. foreign policy (and responsible for much of that budget deficit, which had been a surplus at the beginning of the previous administration) but also spawned such continuing problems as ISIS. Now moving into the last quarter of his presidency he is carrying the necessary but mostly thankless burden of having to be the restrainer-in-chief.

Peter Beinart, in observing how the very emotional American public and political reaction to the gruesome killing by ISIS of two freelance journalists resembles in some respects the deep emotional reaction by the American public to the taking hostage of U.S. diplomats in Tehran in 1979, sees some similarity between the current domestic politics of U.S. foreign policy and the politics during the latter part of Jimmy Carter's administration. This is another piece of bad luck for Obama: having to deal with such emotional—and very unhelpful in trying to win support for prudent and carefully constructed policy—public reactions to still more events that are not of his own making. But as Carter himself observed, life is unfair.