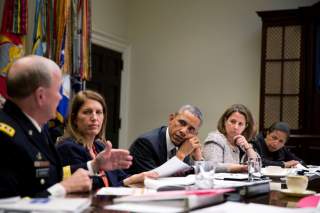 Edward Luce in the Financial Times has a take on Barack Obama's foreign policy that is accurate and should be evident to all. But given the state of foreign policy discourse within American politics, perhaps it is not surprising that it falls to a longtime foreign observer of American policy and politics to make this particular observation. Luce states that as Mr. Obama's presidency “matures,” he “is showing qualities one would normally associate with Henry Kissinger—the arch-realist of U.S. diplomacy.” Luce points to Obama's handling of relations with both Iran and Cuba as evidence that he “is grasping the essence of diplomacy—when adversaries come to terms, neither achieves everything they want,” and that he realizes that “the perfect should not be the enemy of the good.”

Luce focuses especially on the Middle East as a region where President Obama, without acknowledging it, “is taking a leaf from Mr. Kissinger's book” by both pursuing a deal with Iran's regime and simultaneously “stepping up support for its equally dubious counterparts in the Sunni world.” It is a balance-of-power approach, in which the essence of the Obama administration's policy in the region is: “Rather than trying to convert the Middle East to our values, it seeks to limit the region's ability to export its pathologies.”

That Mr. Obama's foreign policy is in its main respects a sober, prudent—and mostly unoriginal—exercise of realism should be obvious but gets obscured by, most of all, the different colors with which his political opponents assiduously endeavor to paint it. The president is consistently portrayed as naive, or weak, or insufficiently assertive in advancing American values. Or as the Speaker of the House said the other day about the nuclear negotiations with Iran (in comments in which Mr. Boehner made clear he wants to kill the deal outright, dropping the pretense that those on his side of the aisle want a “better deal”), “It just appears to me that the administration wants a deal at almost any cost.” The groundless nature of that statement should be apparent to anyone who has looked at all seriously at the history of the negotiations, at what has been agreed to so far, and at who has had to make what concessions to get to this point.

The obscuring of the nature of the current administration's foreign policy also has other roots, including ones that do not necessarily involve the president's opponents. There has been talk about an “Obama doctrine,” reflecting a perpetual yearning among the chattering class in this country to apply such labels and to characterize each presidential administration in unique terms that would warrant such a label. Apply the label if you want, but it implies more uniqueness than is really there.

It is more boring, but also more accurate in characterizing the current administration's policies, to describe it as guided mostly by realist principles that have been applied not just by Henry Kissinger but many others in the past. Among those principles are that U.S. policy should be focused consistently on the most effective ways of pursuing carefully defined U.S. national interests, that the world must be dealt with as it really is and not as we might wish it to be, that in pursuing its interests the United States must use all available tools and deal with all other countries, and that compromise is inevitable and perfection impossible. Unexciting stuff, but wise stuff.

The widespread failure to recognize, with regard to this stuff, both what the Obama administration has been doing and what any administration ought to be doing is a sad comment on the state of foreign policy discourse in the United States today (and Luce notes that the realist strand in Mr. Obama's policy “goes heavily against the grain of the debate in Washington”). This discourse takes place in an environment in which sound and unexciting realism cannot be accepted for what it is without being dressed up with a snazzier label, and in which policies based on such realism get denigrated as weak or unprincipled or something else.

The political environment in which the discourse takes place is one in which the foreign policy of one of the major parties, which now controls the Congress, has been captured by neoconservatism, with a libertarian minority and a realist remnant—reflecting a tradition once represented by Mr. Kissinger and his boss, President Richard Nixon—that is an even smaller minority. The other major party—as a political beast separate from the Obama administration—has been having a hard time finding its foreign policy bearings amid a nationwide rightward shift. The Democrats seem likely to put up a presidential candidate who is substantially more hawkish than the party's rank-and-file, and many members seem less inclined to assert proudly any realist tradition than merely to limit the ability of the other side of the political spectrum to export its pathologies.

The political power of American exceptionalism, of which neoconservatism is the most muscular manifestation, leaves little basis for expecting that any of this will change any time soon. Completion and implementation of a nuclear agreement with Iran would be a significant realist achievement very much in the tradition of—and Luce makes this comparison explicit—what Kissinger and Nixon did in their opening with China. But first the agreement must be completed and implemented, and anti-realist sentiment is keeping uncertain whether that will happen.