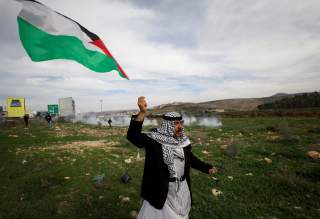 The unique entity known as the Palestinian Authority (PA), created twenty-five years ago as a supposedly transitional structure, is well past its sell-by date. The anniversary earlier this year of the Oslo Accords, which established the PA, was an occasion to take stock of the unresolved Israeli-Palestinian conflict. The next twenty-five years are unlikely to see any more change in the state of this conflict than in the past twenty-five years, as long as the existing “peace process” edifice, of which the PA is a part, remains.

The PA receives tokens of diplomatic support from its sympathizers from time to time by being treated in some international organizations as if it were a state. During the most recent session of the United Nations General Assembly, for example, the Palestinian ambassador was elected president of the Group of 77, the largest bloc of less developed nations. But the PA plainly is not a state, and Palestine can never be a state as long as some other state occupies the territory where its would-be citizens live and exercises the most important functions of sovereignty in that territory.

Palestinians no doubt appreciate gestures such as the one the G-77 made, but that’s all they are: gestures. The Israeli government’s usual complaints about “unilateral” Palestinian moves are, of course, ridiculous when the moves involve actions by large multilateral bodies such as the General Assembly or G-77. But Israel will continue to complain while it makes its own genuinely unilateral moves to establish new facts on the ground in the West Bank. Pretending that a goal such as self-determination has been achieved does not bring the accomplishment of the goal any closer. It may instead only sustain a rhetorical basis for preventing the goal from ever being realized.

The president of the Palestinian Authority, Mahmoud Abbas, occasionally has threatened to dissolve the PA if the peace process continues to make no progress. But Abbas has never actually carried through on the threat and pulled the plug. Part of the reason is that the PA has evolved into a self-sustaining organization whose main day-to-day significance is as a source of employment for Palestinians.

Meanwhile, with each passing year the PA has less of a claim to being representative of the Palestinian people. Abbas is now in the fourteenth year of a four-year term to which he was elected in 2005. The most recent Palestinian legislative election—in which Hamas defeated Fatah—was in 2006.

The Palestinian Authority made sense as a temporary, transitional mechanism as the Oslo Accords envisioned. It does not make sense as a lingering monument to the failure of Oslo to lead to a real peace settlement. Dissolution of the PA would be appropriate. The Palestine Liberation Organization—the Palestinian player at Oslo—would have to do the dissolving, and Abbas wears an additional hat as chairman of the PLO. His reluctance in the past to abolish one of the organizations he heads may endure. But dissolution would serve several useful purposes.

It would remove a false façade of the Israeli occupation, and one of the bases for pretending it is not an occupation. In areas in which the PA supposedly is the principal local authority, it does not exercise the full functions of a sovereign. Even those areas are limited in size. In Oslo’s threefold division of the West Bank, Area A, which is supposed to be under PA administration, constitutes 18 percent of the West Bank. Area B, designated for joint Israel-Palestinian administration, is another 22 percent. In the remaining 60 percent, labeled Area C, Palestinians have no governing role at all.

Dissolution would distinguish what is temporary from what is justifiably permanent. It would give Palestinians an opportunity to retire old leadership. It would eliminate the technique—useful to the Israeli government and its supporters in kicking the can of Palestinian self-determination down the road indefinitely—of demanding “performance” from the Palestinians as a precondition for any progress toward statehood.

Most important, dissolving the Palestinian Authority would make Israelis feel more fully the costs of continued occupation. Such feeling is probably necessary for any breakthroughs toward peace. To the extent the PA performs real administration, it functions as an auxiliary to the occupation. If the full burden of occupation were instead to fall on Israel, indefinite occupation would no longer seem as comfortable and sustainable as it evidently seems to many Israelis now.

Subcontracting the burdens of maintaining dominance over Palestinian-inhabited territory is part of the strategy of the right-wing Israeli government for maintaining that dominance indefinitely. What the PA does in part of the West Bank, Hamas does in the Gaza Strip. The strategy helps to explain the recent decision by Prime Minister Benjamin Netanyahu not to bomb Hamas into oblivion after a clandestine Israeli foray into Gaza went awry and led to an exchange of fire, even though right-wingers such as Defense Minister Avigdor Lieberman, who resigned over the issue, tried to score political points by accusing Netanyahu of being soft on Hamas. Netanyahu was willing to lose some points to avoid the burden of Israel having to administer the Gaza Strip directly. It is far easier to blockade it and to blame Hamas for the miserable conditions there.

It remains to be seen what effect the Trump administration’s “peace plan,” if it ever is announced, will have on any of this. If the plan is as heavily slanted against Palestinian interests as most every other decision the administration has made on this subject, then possibly it will provide Abbas with enough of a nudge finally to pull the plug on the existence of the PA.