The Palestinians and Nuclear Weapons 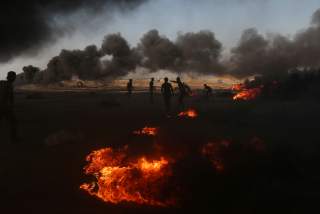 The significance of the unresolved Israeli-Palestinian conflict has long been the subject of tendentious debates. The right-wing government of Israel, not wanting to relinquish the conquered land whose relinquishment would be necessary for peace, often contends, along with its sympathizers, that peace in that conflict doesn’t really matter much anymore. The region has become preoccupied with other things, goes the argument, and even most Arabs care less about the Palestinians’ situation than about other problems. The kernels of truth in the argument are that the Middle East does indeed have many other troubles independent of the Israeli-Palestinian conflict, and that many Arab governments haven’t exactly been steadfast in upholding the interests of their Palestinian brethren.

Every now and then, however, comes evidence of how the nationalist aspirations of the Palestinians cannot be ignored or extinguished any more than comparable aspirations of other peoples, and how subsisting in intolerable conditions will make the limits of their toleration known. The most recent such reminder has been the series of demonstrations, in the face of lethal Israeli force, by residents of the open-air prison known as the Gaza Strip. Even considered apart from other issues, therefore, the unresolved Israeli-Palestinian conflict is a significant source of violence and instability.

That leaves the question of how that conflict does or does not contribute to other security problems in the region. Those following the Israeli government line often employ the straw man argument that not all of those problems stem from the Israeli-Palestinian conflict. Of course they don’t, but this fact is not inconsistent with this conflict being a substantial contributor to regional tension and insecurity. And some of the Israeli government’s own positions underscore this linkage.

Consider the issue of nuclear weapons. Most of the states of the region have actively supported diplomacy aimed at making the Middle East a nuclear weapons-free zone. Israel, backed by the United States and now especially by the Trump administration, has opposed this diplomacy and looked for ways to impede it. These lines of contention were apparent this spring at a preparatory meeting for the next quinquennial review conference of the Nuclear Nonproliferation Treaty. Israel argues that restrictions on nuclear weapons cannot be considered in isolation from other regional security issues. On the face of it, that is a valid argument, given the possible role of nuclear weapons as a deterrent against perceived non-nuclear threats. But Israel and its U.S. backer define the stumbling block in more Israel-specific terms. The Trump administration’s representative at the preparatory committee meeting spoke of many ostensible and mostly vaguely worded reasons to slow-roll diplomacy on a regional nuclear weapons-free zone, but the specific problem he singled out was “the non-recognition of Israel by some regional states.”

Any talk of recognition or non-recognition of Israel should immediately evoke the Arab League peace initiative, which has been on the table since 2002 and commits all the Arab states to recognition of, and peace with, the state of Israel contingent on a withdrawal from occupied territories and a just settlement of the Palestinian refugee problem.

Subsequent modification of the initiative has made clear the Arabs’ acceptance of land swaps that would not require rigid adherence to boundaries that existed prior to the 1967 war. Saudi Arabia took the lead in constructing this peace proposal. The initiative is still on the table. Despite the dalliance with Israel of de facto Saudi ruler Mohammed bin Salman and reports that he is willing to throw Palestinians under the bus as he pursues his own agenda, his government still subscribes to the terms of the initiative.

Let us review the bidding. Construction of a regional nuclear weapons-free zone is said to require recognition of an important regional state—a state especially relevant to anything having to do with nuclear weapons—that is not currently recognized by some other regional states. Fair enough: it would be hard to arrive at a strong and effective arms control agreement without the key players dealing with each other normally as nation-states. Full recognition requires the players in question to recognize the national rights of all other players and not to occupy someone else’s territory indefinitely. Also fair: amid much talk about recognizing Israel’s right to exist, it surely is just as reasonable to insist on recognition of the Palestinians’ right to exist. The conclusion: the unresolved Israel-Palestinian conflict is one of the major factors preventing an effective region-wide prohibition of nuclear weapons.

That the Trump administration has gone all in with the Israeli government’s wishes while continuing to claim for itself the principal mediator’s role in the Israeli-Palestinian dispute augurs very badly for any settlement of the conflict in the foreseeable future. The pessimism is only accentuated when taking into account the personal and financial interests of would-be U.S. mediators that make it understandable for Palestinian leaders to reject them as hopelessly biased. The kind of suffering that has played out in Gaza and along the Gaza fence is one reason to regret the dim prospects for peace on this issue.

Deleterious spillover effects on other issues such as the control of nuclear weapons constitute another reason for regret. This is all the more so since Trump set out to destroy the most effective Middle Eastern arms control agreement in recent years—the Joint Comprehensive Plan of Action, which has closed all the pathways to a possible Iranian nuclear weapon. If the JCPOA were to survive, it would provide a model for major elements of any Middle East nuclear weapons-free zone.

Image: Palestinian demonstrators are seen as smoke rises from burning tires during a protest marking the 70th anniversary of Nakba, at the Israel-Gaza border in the southern Gaza Strip May 15, 2018. REUTERS/Ibraheem Abu Mustafa