Pashtun Paradise: How Years of a U.S.-Led War in Afghanistan Helped Its Adversary Succeed 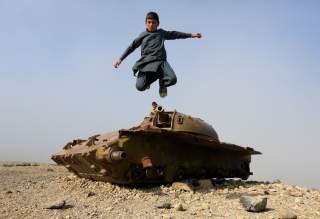 It appears that the U.S. military expedition in Afghanistan, begun in the autumn of 2001, may finally be coming to an end. Significant hurdles still have to be overcome, involving among other things the Taliban having to meet a vague standard of reducing, though not ceasing, their military operations. But a conclusion to direct American involvement in the Afghan war does seem closer than at any previous time in the more than eighteen years of that involvement.

Expect many commentaries in the weeks ahead about what went well and what went poorly—especially poorly—in the Afghanistan war. There will be hindsight-laden appraisals of tactics and strategy and of such things as troop surges said to have started too late or ended too soon. Most of the commentary probably will miss the most fundamental aspects of America’s experience in Afghanistan—what most deserves to go into the history books and what is most relevant to avoiding more ultra-long wars in the future. Those fundamentals have less to do with tactics and strategy and more to do with broader perceptual and political patterns in the United States, including the following ones.

Getting Stuck in Terrorist History

U.S. forces were sent to Afghanistan in 2001 in direct response to the 9/11 terrorist attack, perpetrated by Osama bin Laden’s Al Qaeda at a time that this group was a guest in the Taliban-controlled portion of Afghanistan. The tragic events of 9/11 created such severe national trauma that they have reshaped the way Americans think about terrorism and counterterrorism. It became a template in which perceptions about terrorism and combating terrorism were formed, even though the template does not always conform to a wider reality.

The template also promoted a failure to understand the special circumstances, including the history of the earlier mujahedin fight against the Soviets, that led Afghanistan to be associated with bin Laden, Al Qaeda, and a terrorist threat to the U.S. homeland in 2001—circumstances unlikely to be replicated by future terrorist threats to the United States. Afghanistan came to be seen as the terrorist haven par excellence, even though, to whatever extent such havens may be significant, many other places could serve that role. Afghanistan was seen playing that role even though many of the critical preparations for the 9/11 operation itself took place in Europe, the United States, and cyberspace.

Another American legacy of the trauma of 9/11 was a zero-tolerance attitude toward terrorism. Even a single American death from a single terrorist attack was regarded as something that could and should be avoided, regardless of the costs of trying to do so. This has not always been the case. The 1970s, for example, saw many terrorist attacks within the United States, perpetrated by a variety of foreign and domestic actors, without counterterrorism zooming to the top of national priorities and without any felt need to launch a “war on terror.” As a result of the new zero-tolerance standard, U.S. political leaders have had to live with the fear that if they pulled troops out of Afghanistan and the United States later experienced any type of terrorist attack with any connection at all to Afghanistan, their political opponents would pillory them.

The longstanding term “mission creep” testifies to the prevalence of what that term describes. The dynamics of how mission creep worked in the Afghanistan war, similar to how it has arisen with other issues, are twofold. First, leaders mustering public support for costly efforts such as a war in a far-off, half-forgotten land tend to pull out all the rhetorical stops to do so. Thus the costs and casualties incurred in trying to defeat the Taliban were said to be necessary not only to beat terrorism but also to build a stable democracy in Afghanistan.

Second, once the intervention took place, a sense of U.S. ownership of the problem followed and with it, changed standards for deciding whether to go or to stay. Issues that never would have been a reason for going to war in Afghanistan in the first place later became reasons not to leave it. Concern about the repressed state of women under restored Taliban rule, for example, became one of those issues even though it would not have been a casus belli for initiating the intervention.

Effects of the Iraq War

The grand neoconservative experiment in trying to remake the politics and economics of the Middle East through regime change in Iraq had deleterious effects on U.S. policy toward Afghanistan, in two different ways under two different administrations. For the George W. Bush administration—which began the march toward war in Iraq shortly after 9/11 and, after a huge promotional campaign to sell the war, launched it in March 2003—Iraq was an enormous distraction from Afghanistan. The biggest cost in this regard was not measured in troops and tanks but rather in the focus and attention of policymakers. The resulting loss of focus on Afghanistan was a major factor in missing what would have been an appropriate exit point, just several weeks into the U.S. intervention after Al Qaeda had been rousted from its base and the Taliban had been ousted from power in Kabul.

For the succeeding administration of Barack Obama, the “good war” in Afghanistan contrasted with the bad war in Iraq. Having been on the correct side all along in opposing the folly of the Iraq War, Obama felt an extra reason to stay the course in Afghanistan and even to surge U.S. force levels temporarily to show that he was not a pacifist wuss.

Misunderstanding Other People’s Ways of War and Peace

Americans tend to think of all their wars in a simplified way in which wars have definite beginnings and ends and in which good guys are clearly distinguishable from the bad. The model was a poor fit for the long and messy Afghanistan conflict. The U.S. intervention was preceded by decades of warfare, of ever-changing complexion, in Afghanistan. That history included coups and insurgency in the 1970s, Soviet occupation and resistance to the occupation in the 1980s, and in the 1990s, fights among warlords later swept aside by the Taliban. Revisions of alliances and outright side-switching have been common. Afghanistan’s complex ethnic geography has further complicated the Americans’ problem. For example, the Tajiks who dominated the local forces most heavily involved in ejecting the Taliban from their seat of power after the U.S. intervention are a minority who would never be allowed to secure a dominant position in Afghanistan.

The prudent way for the United States to have extracted itself from that messy situation would have entailed adapting to the Afghans’ ways of war and peace, in which concepts of victory and defeat and of good guys and bad guys play much less of a role than do hodgepodges of bargains struck among local chieftains. But the United States never seemed to adapt, and kept thinking in terms of achieving nationwide victory over the Taliban. More than eighteen years later, its troops are still there.