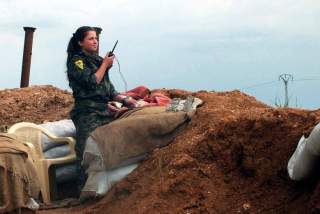 Creeping escalation characterizes U.S. military involvement in Syria. What had been fifty American troops on the ground expanded to three hundred beginning last month. Official descriptions of this contingent as not being directly involved in combat become increasingly difficult to swallow as piecemeal reports of the Americans' activity become available.

The latest detail, which is disturbing on multiple grounds, is that some of the U.S. troops have been wearing on their uniforms the insignia of the Kurdish People's Protection Unit, or YPG, while fighting against ISIS in northern Syria. A Pentagon spokesman told reporters that "special-operations forces, when they operate in certain areas, do what they can to blend in with the community to enhance their own protection, their own security." An officer speaking for the U.S. Special Forces Command Middle East had a somewhat different explanation, saying that “U.S. Special Operations Forces and their counterparts typically swap unit patches as a method to build trust … This is a tactical decision and not a reflection of U.S. Government policy.” A day later a Baghdad-based spokesman for Operation Inherent Resolve walked the matter back farther, saying, “Wearing those YPG patches was unauthorized and inappropriate, and corrective action has been taken.”

The Turkish government, unsurprisingly, was irate about the wearing of the patches. Ankara always has opposed any assistance to the YPG, which is the armed wing of a Syrian Kurdish group that Turkey considers to be in effect part of the PKK, the Kurdish group that has long fought an armed campaign against Turkey. Wearing YPG insignia takes things a step further. It says in effect not only that the United States finds the YPG useful in fighting against ISIS in Syria but that it identifies with YPG goals generally. The Turkish foreign minister angrily and sarcastically replied to the Pentagon's explanation about force protection, “In that case, we would recommend they use the patches of Daesh [ISIS], al-Nusra and al-Qaida when they go to other parts of Syria and of Boko Haram when they go to Africa."

The broader symbolism of U.S. troops identifying with a local militia goes well beyond upsetting the Turks. The symbolism gets to the broader problem of the United States in effect subordinating itself to the goals and interests of some of the parties to local conflicts. That problem has become more difficult to avoid the more deeply the United States wades into the complicated and messy Syrian civil war. This episode brings to mind, despite the differences, the use by Russia in Ukraine of “little green men”—Russian troops wearing uniforms without any markings indicating that's who they were. Both instances involve a manipulation of insignia, although in the U.S. case there is no official attempt to deny the presence of U.S. soldiers in Syria. The false-front aspects of wearing someone else's insignia, as with wearing no insignia at all, tend to feed suspicions of what undeclared shenanigans the United States is up to. Russian propagandists are probably thinking of ways to exploit the episode.

Uniforms and the patches on them may seem of trivial importance compared to many other things in warfare, but they aren't. They are, among other things, important aspects of the law of war, in distinguishing each belligerent's combatants from civilians and from other side's combatants. The U.S. troops sent to Syria have a very difficult job, given the confusion about objectives and priorities that have plagued the U.S. involvement in this multi-sided conflict. A move that can look like hiding behind the skirts of a Kurdish resistance group is one reflection of that confusion.