Pompeo Is Part of the Trump Administration's Credibility Problem 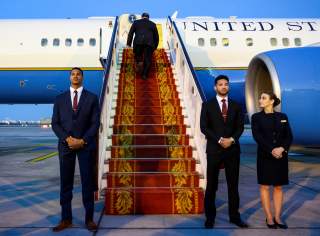 Secretary of State Mike Pompeo delivered a campaign speech in Cairo that seemed written to please an audience of one—President Donald Trump—along with the domestic political base to which Trump’s own rhetoric is designed to appeal. The main theme was the familiar one that U.S. policy before the Trump presidency supposedly was uniformly awful and that since then the current administration has spectacularly turned everything around for the good. A further familiar theme is that nearly everything in U.S. foreign policy ought to be subordinated to confronting Iran. Whatever purposes the speech may have accomplished for Pompeo back home, as a statement to Middle Eastern listeners it was remarkably tone-deaf.

The speech invited comparison with the speech Barack Obama delivered in the same city during the first year of his presidency and that was carefully crafted for Middle Eastern ears. Obama’s main message was that the Muslim world and the West can enjoy better relations than their history would suggest, but that improvement will require frank recognition of both the positive attributes and the shortcomings that each side brings to the relationship. While respectful toward Islam, Obama, as veteran Al-Arabiya journalist Hisham Melhem observed at the time, “boldly discussed some thorny, tough, sensitive issues that sometimes Muslim leaders and Arab leaders don't like to hear.” Obama made a strong statement of the positive values that America has brought to Middle Eastern affairs while honestly acknowledging mistakes the West has made in its encounter with the Muslim world, from conduct during the Crusades to present-day Islamophobia. He also laid out a comprehensive positive agenda for a better relationship, covering topics from control of nuclear weapons to expansion of democracy, religious freedom, women’s rights, and economic development. Obama’s speech was favorably received and widely recognized as an important statement.

Pompeo himself explicitly invited comparison with the Obama speech—evidently believing that ten years is enough time for people to have forgotten what Obama said—and denigrated it as allegedly filled with “fundamental misunderstandings” that have had “dire” results. According to Pompeo, Obama “told you that radical Islamist terrorism does not stem from an ideology.” No, Obama didn’t say that. He did discuss the main factors, such as political oppression and some of the economic consequences of globalization, that help to build an audience for such ideologies. As Bruce Riedel of the Brookings Institution commented after Obama’s speech, one of the most important aspects of the speech was “to attack directly the narrative and ideology of al Qaeda. For too long the war of ideas was ceded to al Qaeda. By explaining his view of Islam, his vision of Arab-Israeli peace and other key issues the President took on al Qaeda’s argument for terror.”

Also according to Pompeo, before the current administration took office the United States “grossly underestimated the tenacity and viciousness of radical Islamism.” That assertion certainly does not reflect the Obama speech in Cairo, in which Obama expressed determination to “relentlessly confront violent extremists who pose a grave threat to our security.”

Like typical campaign rhetoric, Pompeo’s speech baselessly claimed credit for any positive result that has been achieved by anyone, even before the current administration took office. Referring to the fight against the Islamic State (ISIS), for example, Pompeo talked about what has been done “just last year” in the same breath as a reference to 99 percent of ISIS territory having been liberated, without mentioning that most of that liberation occurred during the previous administration.

Pompeo made multiple references to use of chemical weapons by the Syrian regime, contrasting a previous approach of doing “nothing” in response to how “President Trump unleashed the fury of the U.S. military not once, but twice, with allied support. And he’s willing to do it again, although we do hope that he does not have to.” The secretary will need to keep hoping, because the very fact that the Assad regime has kept doing what it was doing despite the U.S. military strikes indicates the strikes are not working. Using the measure of how much time transpires between chemical weapons incidents, the strikes have worked less well than the diplomacy-centered approach used earlier.

The speech’s lengthy excoriation of Iran also was written in a tone suggesting great accomplishment, even though nothing has been accomplished in the last two years. Despite all the pressure the Trump administration has exerted on Iran, there is still no sign of any “better deal” on nuclear matters or anything else to replace the Joint Comprehensive Plan of Action and Security Council Resolution 2231, of which the United States is in material breach following Trump’s reneging on U.S. obligations. Pompeo tried to claim accomplishment by asserting that the pressure campaign had “cut off the revenues the regime uses to spread terror and destruction throughout the world,” but such assertions do not reflect any positive results. As recent analyses by both the International Crisis Group and the Congressional Research Service have concluded, there has been no correlation between more sanctions being imposed on Iran and any retrenchment in Iran’s regional activities.

Some passages of Pompeo’s speech that supposedly describe past policies can only be met with a bemused shaking of the head and the question, “Where did he get this?” One such passage is “Our eagerness to address only Muslims and not nations ignored the rich diversity of the Middle East and frayed old bonds. It undermined the concept of the nation-state, the building block of international stability.” Previous administrations did not “address nations”?

There will be similar head-shaking among most Arabs and most Muslims who heard or read the speech. They will see almost nothing positive in it, from the standpoint of undercutting radical agendas, resolving conflicts within the region, or anything else. It is almost all negative and all about conflict and confrontation, especially with a military emphasis. Many will interpret the speech as a combination of domestic U.S. political combat overlaid on the Trump administration’s penchant for drawing rigid lines of conflict within the Middle East, of which the obsession with stoking hostility to Iran is a part.

Most listeners in the Middle East will be struck by the omission of some major current regional concerns. Yemen, for example, is mentioned primarily as a supposed front for confronting Iran, with no mention of how the Saudi-led war has generated the humanitarian disaster there.

Or consider the Israeli-Palestinian conflict. Obama’s speech included a significant and carefully balanced segment on this subject, which paired a strong defense of the “unbreakable” U.S. bonds with Israel (and a review of the history of persecution of Jews) with a recognition that Palestinians “have suffered in pursuit of a homeland.”

Pompeo offered just a single line promising to “press for a real and lasting peace between Israel and the Palestinians” and made no reference at all to any rights for Palestinians. He instead spent several lines defending the locating of the U.S. embassy to Israel in Jerusalem, saying this honored “a bipartisan congressional resolution from more than two decades ago,” not addressing why several presidents of both parties wisely did not try to implement this congressional gesture.

In an even lengthier passage, Pompeo talked about how an Israeli judo champion was crowned the winner of a tournament in the United Arab Emirates and how the Israeli sports and culture minister shed tears of joy over Israeli participation in the meet. Don’t expect the average Middle Eastern man in the street to get as overcome with emotion about this as the minister did.

Pompeo referred to “truth” at both the beginning and end of his speech, which is enough to raise eyebrows coming from a senior official working for a president as truth-challenged as Trump. A major credibility deficit exists for this administration on the issues the speech addressed, and the speech itself did nothing to reduce it.