Prague and a Pardon 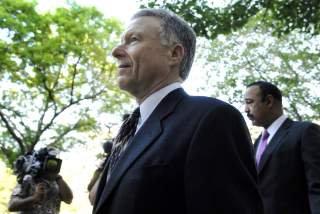 The principal motivation for Donald Trump’s pardon of I. Lewis “Scooter” Libby is obvious, as many commentators have quickly discerned.  The explanation flows directly from how Trump has used the power to pardon, how he has approached many other decisions, and his methods for dealing with his legal troubles.  Trump pardoned Libby to send a message to the Cohens, Manaforts, and all others who may have compromising information on him that they should not plea bargain with prosecutors and that if they stay loyal to Trump, he will pardon them, too.  Trump may also have had additional motivations, comparably personal and self-centered, that contributed to his move, but the increasing intensity of his legal difficulties makes the first explanation most persuasive.  As a maneuver to keep key witnesses from cooperating with prosecutors and telling all they know, the move is one way to obstruct justice.

Trump doesn’t care about the facts of Libby’s case.  George W. Bush did care and reportedly studied the case carefully.  Although he commuted Libby’s sentence, he did not pardon him—despite heavy pressure to do so from Bush’s own vice president, Richard Cheney, who was Libby’s former boss.

Trump has given no indication of using presidential pardons for their proper purpose, which is to correct injustices that may emerge from the criminal justice system.  Libby’s pardon is only the third that Trump has issued.  The other two had nothing to do with correcting injustices but instead were about sending political messages. One was for Joe Arpaio, the sheriff from Arizona who flouted a court order to stop his “immigration round-ups” that were based on racial profiling.  The other was for a U.S. Navy seaman, Kristian Mark Saucier, who surreptitiously photographed the sensitive innards of a nuclear attack submarine and was given a one-year prison sentence for unauthorized retention of classified defense information.  That case came to Trump’s attention when Saucier’s lawyers unsuccessfully argued against a prison sentence on grounds that Hillary Clinton had not been indicted for her handling of email.  Trump himself then took up this comparison in his rhetoric attacking Clinton.

Although Trump doesn’t care about the circumstances surrounding Libby’s case, other Americans should.  Notwithstanding some confusing details involving retracted testimony by a journalist and questions of exactly who leaked what to whom, the basic reason the case arose in the first place is clear.  Libby was part of an effort, within the Bush administration and centered in large part in Cheney’s office, to discredit any judgments of the intelligence community that contradicted the administration’s effort to sell to the American public the war in Iraq.  The most intense discrediting efforts involved the issue of terrorist connections, with the war-makers’ effort to conjure up an “alliance” between Al-Qaeda and the Iraqi regime running directly contrary to the intelligence agencies’ judgments.

But there also were some contradictions involving supposed Iraqi weapons of mass destruction.  The administration salesmen seized on a thin (and erroneous, as it turned out) report about Iraqi purchases of uranium ore in Niger.  The CIA did due diligence and retained retired ambassador Joe Wilson to travel to Africa to investigate the matter.  Wilson, who was well qualified by experience for the task, found no evidence to support the report and ample reason to believe it was untrue.  The subsequent outing of Wilson’s wife Valerie Plame—and with it the ruining of her career in the clandestine service—served the administration purposes in punishing Wilson (who, to the consternation of the administration, wrote an op-ed about the uranium issue) and portraying his role in the matter as somehow involving nepotism.

Those events parallel Trump’s situation today.  In each case an administration or a president has endeavored to discredit intelligence and security services that have uncovered inconvenient truths.

There may be another parallel.  One of Cheney’s favorite bits of flimsy reporting in trying to sell the notion of a terrorism alliance was about a supposed meeting in Prague between an Iraqi official and lead 9-11 hijacker Mohammed Atta.  Cheney referred to the report as credible even after the FBI and CIA had concluded that probably no such meeting had occurred.  As late as September 2003—six months after the U.S. invasion of Iraq and well after the investigating agencies had determined that the purported meeting was fiction—Cheney was still referring to it in reciting reports to support his contention that Saddam Hussein had been collaborating with Al-Qaeda.

Now there are reports that Trump’s personal lawyer and fix-it man, Michael Cohen, may have met in Prague during the 2016 election campaign to confer with a Russian official.  Such a meeting was one of the items in the “dossier” that former British intelligence officer Christopher Steele compiled from sources in Russia.  This month the McClatchy newspaper chain reports that the Justice Department’s special counsel has information confirming that Cohen did travel secretly to Prague in late summer 2016.  Let us do what Cheney failed to do, which is to stay carefully within the limits of available reporting.  All that we, the public, have so far are the Steele dossier and the McClatchy report.  At this point a meeting between Cohen and a Russian in the Czech capital should be considered only an allegation.

Cohen denies ever being in Prague.  Especially if he digests the message Trump has sent with the pardon of Libby, he probably will not change his story.  Possibly the material that law enforcement officers collected from his office and are about to start digesting will yield a different story.