Principle and Pragmatism, Here and Abroad 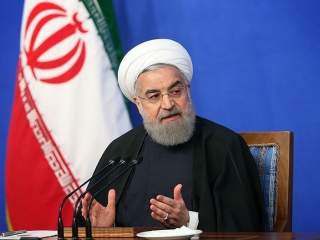 In a story out of Tehran, President Hassan Rouhani, who in the Iranian political context merits the labels “reformist” and “moderate”, is being pushed by others in the reformist camp who believe he has not been aggressive enough in challenging Iranian hardliners across the full spectrum of issues that separate hardliners from reformists. The immediate challenge comes in the form of a letter from someone who otherwise has much in common with Rouhani: the cleric, reformist leader, and former presidential candidate Mehdi Karroubi. Karroubi, who has been under house arrest since 2011, demands in his letter that he be given a public trial.

Rouhani has said in the past that he would work for the release of Karroubi and another prominent reformist leader under house arrest, Mir Hussein Moussavi. But Rouhani and his allies evidently believe that to press that issue right now would be one too many confrontations with hardliners and would risk losing the support of supreme leader Ali Khamenei for accomplishing other reformist priorities. Chief among those priorities is to turn around Iran's economy, which in turn has been a reason for Rouhani to place as much emphasis as he has on negotiation and implementation of the recent nuclear agreement and improvement of economic relations with the West.

The division in the reformist camp in Iran is similar to some disagreements in other political systems, including our own, between people who share between themselves the most important objectives but differ over strategy and tactics in terms of how many of those objectives can be accomplished and how quickly they can be accomplished, and whether in certain situations direct confrontation with political opponents is better or worse than husbanding political capital to spend in a more selective way. Barack Obama is in a similar situation to Rouhani in this respect, even though unlike Rouhani he does not have to deal with a supreme leader sitting on top of the political system in which he operates. President Obama does have to deal with the strong expectations in what he describes as the Washington playbook, and also with a Republican-controlled Congress that is even worse than a supreme leader in that the majority in that Congress is determined to oppose Mr. Obama at every turn. The president's pragmatic way of dealing with this political reality has meant that not all of the principles and goals he articulates, including in foreign policy, get pushed all the time as hard as he might otherwise like to push them. He is one of those who believes in the importance of keeping priorities in mind and expending political capital selectively. This approach has subjected him to criticism from those, who generally would be labeled as liberal or progressive, who share far more of his objectives than anything they might share with the Republican opposition but who are disappointed that Mr. Obama has not pressed those objectives any more strongly and comprehensively than he has, and who wish that he had tried harder to change political realities rather than just adapting to them.

A somewhat similar dimension characterizes the race for the Democratic presidential nomination between Hillary Clinton and Bernie Sanders. Although there are some genuine differences in objectives—and the differences in what they have said about the Israeli-Palestinian conflict, which have been stark enough to get attention in Israel, might be one such issue—such differences appear to be much less than differences over strategy and pace in pursuing the objectives. A common observation about this contest, that Sanders is unhesitatingly promoting a full-throated progressive agenda while Clinton is giving more attention to what is practicable and what is not, is only slightly an oversimplification.

Neither side in these sorts of debates over political and policy strategy has a monopoly on truth or wisdom. Each side has legitimate arguments. Those who favor pushing full-steam ahead on parts of a policy agenda can rightfully ask what is the purpose of political power if it is not going to be used to the utmost to pursue what is worth pursuing. They emphasize the role of political leadership in changing minds and not just in accepting opinion as it is. They point to the risk, if there is too much trimming of political sails for reasons of practicality, of power and office-holding coming to be treated as ends in themselves.

Those on the other side of the debate, who stress the need to pay attention to priorities and practicality, correctly observe that political capital is limited and that one has to work with the political system one has and not what one would wish it to be. They note that compromise and log-rolling are intrinsic to politics and policy-making. They are mindful of the risk that if you try to accomplish everything you may bring about reactions that lead you to accomplish next to nothing. They correctly point out the risk that a political leader who is seen, for better or worse, as going against a generally accepted playbook on too many issues will lose credibility as being outside the mainstream and will lose the political clout to do good works.

Pundits and voters will not be able to settle this whole debate. Against the backdrop of such debates, however, they should try to do two things. One is to discern, through careful attention to the statements and records of individual political leaders, why those leaders act, or refrain from acting, as they do. This means distinguishing, for example, a genuine progressive who avoids some confrontations out of considerations of political practicality from someone who is not really a progressive at all. It also means distinguishing a leader who is trying to preserve political capital to accomplish worthwhile tasks to come from a politician for whom holding high office is an end in itself, with the true objectives having more to do with personal ambition than with good works. Examples of each of these types are to be found in the political class of most countries, including our own.

The other thing that pundits and voters alike ought to do is place these debates over strategy into the larger context of what is at stake and what are the available choices—choices of policies by office-holders, and choices of candidates by voters. With Iran, for example, one needs to be mindful of the differences between hardliners and reformers and how those differences are much greater—in their implications for Iranians as well as for relevant U.S. interests—than any difference between a Rouhani and a Karroubi. In the United States, one must remember that despite the acrimony and invective that have characterized the race for the Republican presidential nomination (and despite some caustic qualities having more recently infected the Democratic race as well), the differences between the parties are vastly greater on issues that matter most to the nation than are differences among the remaining candidates within each party.