The Real and Imagined Problems of the Middle Eastern Arms Trade 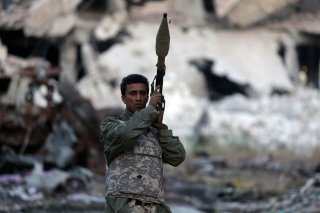 One of the latest steps in the Trump administration’s never-ending pressure on Iran in its attempt to extend a United Nations-imposed embargo prohibiting the export to, or import from, Iran of conventional arms. At a rhetorical level, the administration’s pitch is easy to make—no American politician ever lost votes by arguing against arms going to Iran. But the administration says nothing about the background and context of the embargo, which it would if it really were concerned about arms and insecurity in the Middle East.

The embargo in question never was intended to address the problem of destabilizing conventional arms transfers. Instead, it was one more sanction, along with other economic sanctions, that were placed on Iran as inducements for Tehran to negotiate limitations on its nuclear program that would preclude the possible development of an Iranian nuclear weapon. Iran did so negotiate, leading to the Joint Comprehensive Plan of Action (JCPOA), which closed all possible paths to an Iranian nuke and entered into force in 2015.

It would have been logical for the arms embargo, along with the other sanctions having the same purpose, to be lifted once Iran fully complied with its obligations under the JCPOA. But the United States argued for a delay, and Iran, as one of the concessions it made during the negotiation, agreed to a five-year continuation. That five-year period ends in October.

Iran has exceeded some of the nuclear limits in the JCPOA during the past year but has done so only as a delayed, measured, and reversible response to the Trump administration’s earlier wholesale violations of the agreement, with Iran intending the move as counterpressure to induce a return to full compliance with the JCPOA. Indefinite extension of the arms embargo would be one more blow against the JCPOA, among the many other efforts by the Trump administration to destroy the agreement altogether. Destruction would mean an end to the JCPOA’s restrictions on the Iranian nuclear program, a possible nuclear arms race in the Persian Gulf region, and the elevation of nuclear, not conventional, arms as the prime security worry in the Middle East.

The conventional arms trade is indeed a destabilizing factor in the Middle East, but a multilateral approach that does more than pressure one regional state would be needed to address that problem effectively. Moreover, if any state were to be targeted, targeting Iran would hardly dent the problem.

According to data compiled by the Stockholm International Peace Research Institute (SIPRI), arms exports to the Middle East have increased 87 percent over the past five years and now represent more than a third of the global arms trade. So there is a region-wide problem worth addressing.

It is clear who stands out on the recipient end of that problem. Saudi Arabia imported the most arms of any country in the world during 2014–2018, the period examined in the most recent SIPRI report. Saudi Arabia’s purchases of arms during that time increased 192 percent over the previous five years.

It also is clear who stands out on the seller end. The United States is the world’s most prolific seller of armaments. More than half of U.S. arms exports in 2014–2018 went to the Middle East. Saudi Arabia received 22 percent of worldwide U.S. military exports.

Both ends of this pattern are continuing. Data compiled by the Forum on the Arms Trade in late 2019 showed U.S. arms sales that year more than doubling from 2018. Over the next five years, Saudi Arabia is scheduled to receive ninety-eight more combat aircraft, eighty-three tanks, and defensive missile systems from the United States. The Trump administration and the Saudi regime have signed letters of intent that would see $350 billion in U.S. arms going to the Saudis over the next ten years.

These deals widen ever further the military gap between the Gulf Arab states and an Iran with much inferior equipment. Lifting the arms embargo currently in question would do little to change that imbalance. The Islamic Republic—quite unlike the previous regime of the Shah of Iran—has never been a big spender in the international arms market. The continuation of other economic sanctions, the decrease in oil revenue, and Iran’s overall financial stringency make any change in that pattern unlikely. Even in 2017, before the Trump administration re-imposed sanctions that had been eased under the JCPOA, the International Institute for Strategic Studies assessed that high cost would continue to limit any Iranian purchases of advanced weapons systems.

Arms transfers as a problem in regional destabilization is to be measured not just in the number of transfers but also the uses to which the arms are put. Arms from the United States have been used in the harsh crackdowns that have abused human rights in Egypt.  They have been used in the also abusive—and periodically very deadly—Israeli occupation of, and assaults on, Palestinian territories. Most obviously in recent years, U.S. arms provided to Saudi Arabia have helped to turn Yemen into what is commonly described as the worst current manmade humanitarian disaster. The Saudi aerial assault on Yemen has been the biggest factor in making that disaster. According to the Yemen Data Project, the bombing campaign has killed or injured more than seventeen thousand civilians as of March 2019.

The U.S. arms provided to the Gulf Arabs have been destabilizing in other ways. Saudi Arabia and the United Arab Emirates have given U.S.-made weapons to militias to buy influence in Yemen. Some of the arms have gone to radical Salafists, including ones with ties to Al Qaeda. Some have even made it into the hands of the Houthi rebels whom the Saudi-led war is supposed to be against.

The methods and motivations behind the U.S. arms sales involved are not the stuff of sound regional policy. An in-depth New York Times article run under the headline “Why Bombs Made in America Have Been Killing Civilians in Yemen” showed that the sales have been motivated far more by generating business for Raytheon and other defense contractors than by any thought of bringing security to that part of the Middle East.

This part of the arms trade has pitted the Trump administration against Congress. Last year Trump vetoed a bipartisan resolution that—following what many other countries had already done—would have ended U.S. support for the Saudi war in Yemen. The administration also circumvented Congress and swept aside normal approval procedures for an $8 billion arms deal with the Saudis by declaring it an “emergency” step.  This irregularity reportedly was one of the subjects of inquiry by the State Department’s inspector general—along with investigations into Mike Pompeo’s use of taxpayer funds for private purposes—before Pompeo got Trump to fire the IG.

Yes, there are major problems with aspects of the arms trade in the Middle East, but problems will not be solved by subjugating everything to the obsession with Iran.