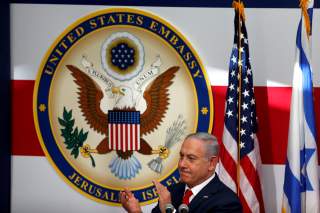 The most jarring takeaway from the ceremony redesignating a U.S. consulate building in Jerusalem as an embassy was the juxtaposition of the self-congratulatory speech making with the killing on the same day, by Israeli forces forty miles away, of sixty people and the injuring of 2,400 more as Palestinian Arabs protested their confinement to the open-air prison known as the Gaza Strip. Also jarring, however, was participation in the ceremony by two American preachers. The first was Robert Jeffress, an evangelical pastor from Dallas, has said that Jewish people who remain Jews and do not convert to Christianity will go to hell. Jeffress is an equal opportunity bigot who does not pick only on Jews. He has said that “religions like Mormonism, Islam, Judaism, Hinduism…lead people to an eternity of separation from God in hell.” The other Texas preacher who was given a speaking role in the ceremony—televangelist John Hagee—has said that according to the Bible, Hitler and the Holocaust were part of God’s plan to return Jews to Israel.

The ceremony was at a U.S. diplomatic installation, and presumably the Trump administration put together the program. Perhaps many Israelis are unaware of what Jeffress and Hagee have preached apart from the prayers they were permitted to offer at the ceremony. But other Jewish Israelis surely were aware; one wonders what they were thinking when Hagee and Jeffress appeared at the podium.

Of course, we know what Trump and his political advisers were thinking in putting the two on the program. They were appealing to part of Trump’s domestic base. Specifically, they were appealing to evangelical Christians, who constitute a larger part of that base than do the Jewish Americans who support him. The religious connection between that part of the base and Israel involves dispensationalism, a Christian doctrine in which—in some versions at least—Israel plays the theological role of forerunner to the second coming of the Messiah. (That’s the point in the prophesied story when all the Jews in Israel, or at least those who do not want to go to hell, are expected to convert.) American dispensationalists such as Jeffress brush aside any historical, demographic, or political disconnect between the Israelites of the Bible and the modern state that Benjamin Netanyahu leads. For them, their theology is reason enough to give unqualified support to whoever runs today’s Israel, as a way of keeping God’s pre-programmed story moving in the right direction.

Linking up with such preachers is not the only way the Trump administration has injected theology into its policy toward the Israeli-Palestinian conflict. Another example involves David Friedman, Trump’s bankruptcy lawyer whom he appointed ambassador to Israel. Friedman, who has personal ties to Israeli settlements in the occupied West Bank, consistently sounds far more like Netanyahu’s ambassador to the United States than like the U.S. ambassador to Israel. In an interview with NPR shortly before the embassy ceremony, Friedman took issue with the interviewer’s reference to events of the 1940s by saying, “Go back another 3,500 years. Go back to the Bible.” He then cited with approval a medieval French rabbi as saying:

It is extraordinary that a U.S. ambassador so zealously embraces one side of a foreign conflict and so persistently parrots the host government’s line. It is even more remarkable that he invokes theology in doing so.

The Israeli-Palestinian conflict involves domination of one group defined in terms of religion and ethnicity over another group. This means that it is especially prone to injections of sectarianism into policy. But it is not the only such injection by the Trump administration. The Muslim travel ban, for example, is another. Through all the attempts to dress it up as something it isn’t—such as inserting in later versions a token non-Muslim country or two—its true nature has remained fairly obvious. It fulfils another piece of Trump’s xenophobic campaign rhetoric. That the ban is more about religion and religious bias than about countering terrorist threats is reflected in the poor correlation between the countries listed and the actual pattern of where such threats have originated.

Less codified in executive orders but nonetheless discernible in rhetoric and policies in the age of Trump is favoritism that distinguishes between different sects within Islam. Sunnis get looked at more favorably than Shia. This tendency is, of course, an artifact of the Trump administration’s other rigid side-taking and especially the defining of its policy in the Middle East in terms of unrelenting hostility toward Iran, which is a predominantly Shia country. But the sectarian bias itself, along with dread associated with something like a Shia crescent, has partly acquired an independent existence.

One of the soundest concepts the Founding Fathers bequeathed to Americans was the separation of church and state, with a Constitution that makes no mention of God and mentions religion only to prohibit government from establishing it. The challenge of permitting free competition among conflicting interests while preventing the competition from blowing the polity up—a challenge that the designers of the Constitution did a rather good job of meeting—becomes much more difficult once any notion of supreme beings becomes involved. Defining one’s positions in terms of divine will leads to a refusal to compromise and is a recipe for confrontation and impasse.

Letting theology or religious preference seep into foreign policy is as damaging, and as much of a corruption of policy, as injecting it into domestic affairs. U.S. ambassadors are supposed to represent the interests of the whole nation, not just those with certain religious preferences or affiliations. For an ambassador, speaking in his official capacity about a foreign conflict, to have his words shaped by his personal political beliefs is as much of an affront to the concept enshrined in the establishment clause of the First Amendment as is a county clerk in Kentucky imposing her personal religious beliefs on other citizens with the way she issues or withholds marriage licenses.

Sectarian bias involves unnecessarily taking sides in a way that does not reflect U.S. national interests and means unnecessarily antagonizing parties to foreign disputes. Any injection of religion accentuates and promotes the sorts of divisions that, in foreign relations as with domestic affairs, discourage toleration and willingness to compromise. Denizens of the Western nation-state system were supposed to have learned that lesson four centuries ago with the Thirty Years War and the Peace of Westphalia.

Current events are exhibiting not only a corruption of policy by injecting religion but also a corruption of religion, or of religious values, by subordinating those values to certain policy objectives. The most conspicuous demonstration of that in America today is evangelical Christian support to an adulterous president who conspicuously flouts the sort of religiously based family values that those evangelicals claim to cherish. The rationale for doing so is to back those leaders, however sinful, who support policies and appoint judges who take the evangelicals’ preferred position on abortion and other issues that are important to them. But what has happened to the religious values in the course of this end-justifies-the-means approach? Values have become, if not quite forgotten, then subordinated to dogma and raw power.

Similar questions in foreign affairs bring one back to that embassy ceremony in Jerusalem. Surely some Jewish Israelis were understandably offended by a foreign government giving an official platform—in Jerusalem, no less—to people who preach that a Jew cannot remain a Jew without avoiding terrible consequences. But what about their prime minister and his government? It’s quite plausible that Netanyahu had a say in deciding who would speak at the ceremony. His government and Trump’s appear to have coordinated closely on a number of things lately. If Netanyahu tolerated giving a platform to people with the views of Jeffress and Hagee, and he did so as political support for Trump in return for Trump’s continuing unquestioned support for Netanyahu’s government, it won’t be the first time the prime minister has done that sort of thing. He did it last year when he stayed largely silent about Trump’s assertions that neo-Nazis who marched in Charlottesville while chanting “Jews will not replace us” were no worse than those protesting against them.

The issues on which Netanyahu’s government most values unquestioned support from Trump’s administration are those centered on the biggest sore spot in Israel’s relations with the rest of the world, which is the conflict with the Palestinians. Much (though not all) of the rationalization for the Israeli government’s uncompromising policies regarding that conflict is as ostensibly religious as what the dispensationalists preach, notwithstanding the enormous difference between their respective visions of the fate of the Holy Land and the people who live there. The unending domination of one ethnically and religiously defined group over another group often gets justified in terms of scripture and divine will, along the lines of Friedman’s quote.