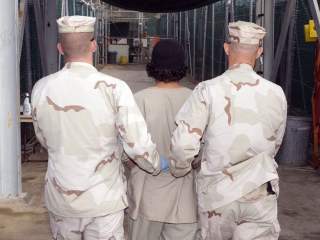 Spandau Prison in Berlin was a red brick structure, on the western side of the city, constructed in the 1870s with the capacity to hold several hundred inmates. The Nazis later used it to detain some of their political opponents; it became a site of torture administered by the Gestapo before the concentration camps were built. After World War II the victorious allies took it over to house Nazi war criminals. Only seven such criminals ever were placed there, all of them ranking figures in the Nazi regime who avoided execution but were given prison sentences in the trials at Nuremberg. By 1957 just three of them were left, and as of 1966 only one: the mentally unbalanced former deputy führer Rudolf Hess. Hess lived in the prison another 21 years before committing suicide in 1987 at the age of 93.

The trouble and expense of maintaining the prison were way out of proportion to its small inmate population. The four allied occupying powers took monthly turns in running the place, with each having to furnish a full complement of military guards and civilian staff. It was generally recognized what a waste of resources this was, but political point-making and symbolism got in the way of substituting any different arrangement. For the Western allies, the prison was an assertion of Western rights in a Berlin surrounded by Communist-controlled eastern Germany and a scarce instance of post-war four-party cooperation. For the Soviets, who tended to treat the prisoners more harshly than the other rotating prison-keepers did, it was an expression of revenge for the enormous damage that Nazi aggression had inflicted on the USSR.

Spandau was kept in operation not only despite the waste of resources but also despite the negative symbolism of a place that was associated with the Nazis and their inhumane rule. That this was realized by the allies was indicated by their prompt demolition of the prison after Hess's death. The debris was pulverized and either dumped at sea or buried at a British military base, to avoid any remnant of Spandau becoming a neo-Nazi shrine. A shopping center and parking garage were constructed on the site of the prison.

With the Republican-controlled Congress appearing determined to resist any change in laws that prevent closure of the detention facility at Guantanamo and prevent movement of any of its prisoners to facilities in the United States, the history of Spandau is in the process of being replayed in southeastern Cuba, although the reasons this is so are more ignoble than the reasons the Western allies had for keeping matters unchanged in Berlin. The waste of resources alone is substantial: the annual cost of running the Guantanamo prison is $445 million, which on a per-inmate basis is orders of magnitude greater than the cost of housing inmates at the most maximum of maximum-security prisons in the United States.

The excuses for not closing the facility and moving remaining detainees are clearly without foundation. Any threat of escapes or other security problems with any of those detainees would be as close to zero as it is possible to get if they were housed at any of several stateside facilities. Any incremental threat over what is associated with housing them at Guantanamo is definitely zero. As for legally disposing of the cases of those against whom such cases can be made, the civilian courts that operate under Article III of the Constitution, especially in highly experienced jurisdictions such as the Southern District of New York, have repeatedly demonstrated their ability to handle terrorism cases effectively—and much better than the less well tried and rather creaky Guantanamo-based military tribunal system.

The flimsy and self-referential nature of opposition to changes to the current system is demonstrated when even Senate Armed Services Committee chairman John McCain, who had been one of the few prominent Congressional Republicans to express some flexibility about Guantanamo, complains that the Obama administration's just-released paper on closing Guantanamo gives only “a vague menu of options.” As administration officials pointed out, the reason greater specificity could not be offered is that among the hand-tying pieces of legislation that Congress has enacted on Guantanamo is a prohibition on the executive branch even doing any planning for closing the prison and moving inmates to a stateside facility. Congress expects a detailed plan from the administration while prohibiting it from preparing one.

The actual dominant motives for the opposition probably are threefold. One is to be associated with something that in a vague way symbolizes toughness on terrorism. A second is to score political points with a public that is encouraged to misbelieve that a detainee who is brought to a stateside prison is liable either to escape or to find a legal loophole for walking out the front door, and then to go kill someone in the neighborhood. And a third is the usual reflexive impulse to oppose any significant initiative by this president.

Meanwhile the symbolic stink of Guantanamo continues. For overseas observers, especially in Muslim majority countries, the negative symbolism involves association of the detention system centered on Guantanamo both with specific past abuses of prisoners and with the more general notion of the United States being at war with Muslims and, if not killing them, then incarcerating them indefinitely. The risk of radicalization stemming from such perceptions is impossible to calculate but may well be greater than whatever risk of anti-U.S. terrorism is embodied in most (though not all) of those still residing at Guantanamo.

For those of us in the United States, Guantanamo also symbolizes something else: an attempted circumvention of the rule of law. This particular location was selected in an effort (not altogether successful) to keep the people at the detention facility and what is done to them beyond the reach of anyone's law, either America's or any foreign country's. Any necessary functions performed at Guantanamo can be performed fully and explicitly under the rule of law—which is the right way to do it—in the United States. As noted in the administration's paper, the fear about detainees who were bought stateside taking advantage of provisions in immigration law is groundless; the same new legislation that would be needed to permit such a relocation of detainees could also make explicit that such immigration provisions do not apply to them.

Until and unless a majority in Congress ends the obstruction on this issue, the current administration (and perhaps the next one) will continue to reduce slowly the Guantanamo inmate population on a case-by-case basis with transfers to willing foreign countries and other measures. Gradually the facility will look more and more like Spandau Prison. Without Congressional action, this process could continue for a long time. Most of the remaining detainees entered Guantanamo at younger ages than the senior Nazis who were put in Spandau. Let's hope the facility, and with it an unattractive episode in American history, is closed before the Guantanamo version of Rudolf Hess, like the original version, hangs himself as a nonagenarian.