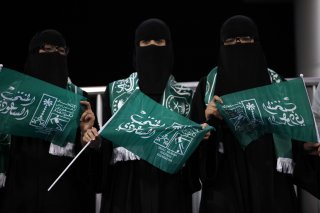 The anachronistic family enterprise known as the Kingdom of Saudi Arabia has long been politically fragile.  In some respects it is remarkable that this entity has endured into the twenty-first century.  A clan of royals lives on rake-offs from the country’s petroleum wealth, while using more of that wealth to buy off a fast-growing population.  The Saudis have had to continue playing that game through vicissitudes of the oil market, on which the Saudi economy depends.  The potential for breakdown has always been present.  Now a king and his favorite—and ambitious and inexperienced—son are bringing the potential closer to becoming reality.

The power plays by that son, Crown Prince Mohammad bin Salman (MBS), include the latest spectacular purge, which extends to senior princes in government as well as leading private sector figures.  The power plays flout some of the principal conventions through which the Saudi royals have held their enterprise together so far.  Although only one man can be king at a time, the system of rule to date has involved a distribution of power among different branches of the royal family.  With the latest purge and the concentration of power in the young hands of MBS, that system is destroyed.

Another feature of the Saudi political scene over the past few decades has been a leaving open of the question of exactly where the royal succession, which had been working its way through sons of kingdom founder Abd al-Aziz, would go once the succession reached the grandsons of Abd al-Aziz.  There is no evident reason why MBS’s father Salman—the sixth Saudi king since the death of Abd al-Aziz in 1953—should have had the prerogative of giving the nod to his favorite son as the holder of power in the following generation.  Salman himself was already showing signs of losing his faculties when he assumed the throne two years ago at age 79.  Not only are there some other sons of Abd al-Aziz still around; there are also grandsons who would rank ahead of MBS in experience and demonstrated ability.  Some of those grandsons are themselves sons of kings—such as the longtime intelligence chief and former ambassador to the United States and to Britain, Prince Turki bin Faisal.

No matter how smooth has been the purge and how much window dressing about family approval adorned the king’s earlier naming of MBS as crown prince, there is bound to be significant resentment and opposition within the royal family over MBS’s power grab.  Discontented royals can seek common cause with sources of discontent outside the royal family.  That is a prescription for even greater internal instability in the kingdom.

The young prince’s audacious moves bring to mind the power plays of another favorite son in a family autocracy, Kim Jong-un of North Korea.  The two heirs are nearly the same age; MBS is a year and half younger than Kim.  Both have unhesitatingly purged people without letting family ties get in the way.  The North Korean princeling’s purges have involved killing the victims—with anti-aircraft guns reportedly often being the weapon of choice.  The far milder Saudi method has been to incarcerate purged individuals at the Ritz-Carlton in Riyadh.  This is obviously a more humane approach, although one has to wonder whether MBS has crossed a Rubicon beyond which only something closer to Kim-style ruthlessness will enable him to keep rivals out of the way.

The internal Saudi instability is important for outsiders, including the United States, regarding the need to realize what they are embracing when they choose to embrace a ruler such as MBS.  (For a reminder of the implications of such an embrace, look at the other side of the Persian Gulf and recall what happened to U.S. influence following Washington’s close embrace of the shah of Iran.)  In addition, there are external implications.  MBS’s internal machinations are related to the export of instability from Saudi Arabia to the rest of the region.  This is partly a matter of how the concentration of power in MBS’s young hands amplifies the effects of rashness and inexperience.  It also is a matter of how rulers have long used external conflicts to complement their solidification of internal power, by providing a distraction from internal problems and benefiting from nationalist sentiment.

Saudi Arabia was already, even before the rise of MBS, a source of instability and a practitioner of throwing weight around elsewhere in the region.  Its moves have included the use of armed force to suppress the Shia majority under Sunni rule in Bahrain, and the stoking of civil war in Syria in collusion with extremists of the al-Qaeda stripe (longstanding Saudi dalliance with whom has been another Saudi channel for exporting mayhem, whether intentionally or not).

MBS is moving faster and farther along this trajectory of regional destabilization.  The prime exhibit is the disastrous war in Yemen, with the Saudi and Emirati offensive taking an internal conflict that was about tribal disaffection from the Yemeni government and turning it into an international humanitarian catastrophe.  The emboldened prince will make the situation even more catastrophic.  Shortly after his purge in Riyadh he announced he was making the partial blockade of Yemen a total blockade of all ground, air, and sea ports, thereby further extending collective punishment of the Yemeni people in a vain effort to salvage some kind of win.

No more successful has been the attempt to bring Qatar to heel. All that this effort has accomplished so far is an increase in tensions and animosity in the Persian Gulf region.

Now, also coincident with the purge, is a new Saudi move to politically destabilize Lebanon.  The announcement by Lebanese Prime Minister Saad Hariri that he is resigning was patently managed by the Saudi regime.  Saudi Arabia is where the Hariri family made its fortune, where Saad Hariri still holds citizenship, and where the resignation announcement was made.  The apparent Saudi intention is to stir the Lebanese pot in a way that somehow would be disadvantageous to Hezbollah, which is a partner in the governing Lebanese coalition.  But all the move has done so far is to make Hezbollah leader Hassan Nasrallah look honest and perceptive in noting the Saudi role in the move, and to make him look reasonable in being the one who wants stability in coalition politics in Lebanon rather than seeking crisis and confrontation.

A major theme in MBS’s regional maneuvers is hostility toward Hezbollah’s ally Iran.  An irony in this mess, given how “Iran’s destabilizing behavior” is a favorite theme of the forces hostile to Iran, is that the destabilization and the seeking of crisis and confrontation and even war are coming predominantly from MBS’s Saudi Arabia, with an assist from the Netanyahu government in Israel.

The contrived nature of the Saudi maneuver in Lebanon is illustrated by a statement from the Saudi minister for Gulf affairs.  Using a chain of reasoning that with Hariri gone, there is “no more distinction between Hezbollah and the Lebanese government,” the minister proclaimed that Saudi Arabia will treat the Lebanese as “a government declaring war”.  This is in response to a political crisis that Saudi Arabia intentionally initiated.  There is no indication that Iran lifted a finger to bring about any of it.

The Trump administration is worse than oblivious to all this; it is stoking it.  While the president tweets about which stock exchange should be used for an initial public offering of shares in Aramco, at least as important a figure is another princeling.  That would be the president’s son-in-law, Jared Kushner, who reportedly has hit it off well with his fellow thirty-something MBS and visited the Saudi crown prince just days before the purge.  This relationship is part of a mutual admiration society that also includes the United Arab Emirates’ de facto leader and Abu Dhabi crown prince, Mohammed bin Zayed, and the Emirati ambassador in Washington.  With everyone swaying to the same tune of seeking confrontation with Iran, it is hard to gauge exactly how much each party is influencing the others.  But if the current U.S. policies toward the Persian Gulf players continue, then the United States will be complicit in the increased regional instability that the young autocrat in Riyadh is bringing about.