Saudi Fragility, and Why MbS Is No Ataturk 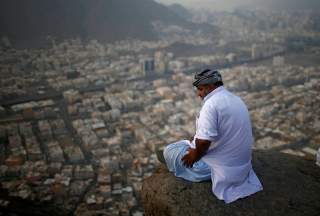 One of the more intriguing news reports about the rapid rise to power of the 32-year-old Saudi crown prince, Mohammed bin Salman (MbS), concerns how he isolated his mother, placing her under house arrest for a time.  He kept her away from his father, the mentally declining King Salman, and devised phony explanations to the king as to why she was out of sight for so long.  MbS reportedly was worried that his mother might have opposed his power grab and in the interest of family unity would have urged the king to stop it.

There is more than one way to interpret this report.  One could read it as the sign of thoroughness by a ruthless operator who knows how to win power struggles.  Or it can be taken as a sign of how thin is the ice on which MbS is skating as he follows a political course so divergent from the way politics in Saudi Arabia and the royal family had worked until recently.  How strong can a politician be if he has to lock up his own mom to get his way?

MbS has been doing other things that, like what he did to his mother, are ruthless or desperate or both.  There was the spectacle of turning the Ritz-Carlton in Riyadh into a five-star jail, in an operation that involved physical brutality and a shakedown that relieved the victims of much of their wealth.  MbS portrayed the operation as an anti-corruption measure, but what exactly does corruption mean in Saudi Arabia, where Saudi royals have long enjoyed a rake-off from oil revenues, from which MbS has benefited as much as other senior princes?

While MbS depends internally on maternal silence and shaken-down assets, he is dependent externally on the United States.  Nothing underscores that fact more than his current visit to America, which as scheduled will stretch to nearly three weeks.  Again, there are a couple of possible interpretations.  On one hand, being away from his capital for so long may indicate how secure MbS believes he is in his position (although there is a history of similarly confident authoritarian rulers elsewhere getting deposed while traveling abroad).  On the other hand, the trip demonstrates just how heavy is his dependence on U.S. support and goodwill.

In seeking that support, MbS portrays himself as a reformer and modernizer who will lead Saudi Arabia from social and economic backwardness into the twenty-first century.  That image brings to mind the greatest modernizer of a Muslim country in that part of the world: Mustafa Kemal Ataturk.  But what Ataturk brought to the task was poles apart from what MbS brings.  Mustafa Kemal was a military hero of World War I—the victor at Gallipoli—and then led an extraordinary effort to rescue Anatolia from the wreckage of the Ottoman Empire, while fighting off Greeks, Armenians, and others in the process.  The sweeping modernization and secularization that Ataturk accomplished as the first president of the Republic of Turkey he accomplished with enormous prestige and standing as the father of his country.

By contrast MbS, notwithstanding whatever Machiavellian power-grabbing skills he has demonstrated, is where he is because he happened to be the favorite son of King Salman, who was the one son of the kingdom’s founder, Abd al-Aziz ibn Saud, who happened to have the moxie to pass the baton to his own progeny rather than to continue the succession among the sons of Abd al-Aziz.  Besides the issue of MbS’s inexperience, and the ways in which his departure from a more collective mode of Saudi decision-making are apt to exacerbate the mistakes of any single leader, we probably have not seen the last of disgruntlement within the royal family over the manner of MbS’s rise.  We may see more of it after the death of Salman.

The American public’s attitudes toward Saudi Arabia have traditionally not been very favorable compared to Americans’ view of many other foreign countries.  The standing of Saudi Arabia in American eyes was hurt further by the 9/11 terrorist attacks, given the Saudi nationality of most of the hijackers.  Saudi Arabia has nonetheless managed in recent years to gain some of the American goodwill it craves through a lavishly funded public relations effort that has included direct lobbying as well as indirect image-polishing through support to think tanks and research centers.  Also leading to an uptick during the past year in some Americans’ views of Saudi Arabia, both directly and by following the lead of the Trump administration, has been the willingness of MbS-led Saudi Arabia to develop relations (below formal diplomatic ties) with Israel, despite the persistence of the Israeli occupation of Palestinian territory.  This willingness is another mark of weakness of MbS.  It reflects a felt need to cadge support (less from anything Israel has to offer directly than from what Israel’s blessing implies for political support in the United States) in Riyadh’s regional rivalries, especially the rivalry with Iran, even if this means abandoning Saudi Arabia’s traditional and more principled stand in favor of Palestinian self-determination.

MbS plays the anti-Iran theme to the hilt.  In an interview with 60 Minutes, he talked about what an open and modern place Saudi Arabia supposedly was before 1979, and that he wants to return the country to what it allegedly was before four decades of darkness.  The event in 1979 that did have some darkening effects was the takeover by Sunni extremists of the Grand Mosque in Mecca, after which the Saudi regime made concessions to hardline religious conservatives regarding such matters as education and acceptable dress.  But the association MbS wants to encourage was with another event of 1979: the Iranian revolution—as if that revolution were responsible for the excesses of the religious police in Saudi Arabia.  In misrepresenting the actual, already mostly closed and backward, social atmosphere in pre-1979 Saudi Arabia, MbS has resorted to falsehoods, such as asserting that Saudi women were allowed to drive cars back then.

MbS also, in the 60 Minutes interview and on other occasions, has invoked the Nazi analogy, describing Iranian supreme leader Ali Khamenei as “the new Hitler”.  Like most invocations of that analogy, it is not only misleading but a trivialization of what the real Nazis did.  It also is rather rich coming from a leader of the Saudi regime, given—as Simon Henderson reminds us—that regime’s history of having some rather cordial relations with the real Hitler.

A strain of opinion in the United States is ready to overlook such history, just as it overlooks Trump’s softness toward some expressions of anti-Semitism in America, if part of the deal is support for the right-wing government of Israel notwithstanding the festering Palestinian problem.  Thus we hear praise for MbS's self-described reforms from quarters that usually are guided by that standard of supporting whatever and whoever supports the Israeli government.

The heavy dependence of MbS on U.S. backing—unmatched, especially in the era of shale oil, by any comparable degree of U.S. dependence on Saudi Arabia—implies significant U.S. leverage that could be used to protect and advance U.S. interests.  Unfortunately, that leverage is not being used.  Part of the problem may be the bromance between the inexperienced 30-somethings, MbS and Jared Kushner, with Kushner appearing to exert major influence on the Trump administration’s dealings with Saudi Arabia without even having a full security clearance.  The biggest immediate problem is the disastrous Saudi-led war in Yemen, where the administration does not seem to want to protect U.S. equities in the face of Riyadh’s persistence in folly.  It was inexcusable for the Trump administration to oppose a resolution on Yemen, which was defeated this week in a vote in the Senate, that would have affirmed the constitutional prerogative of the Congress to determine when and where the United States goes to war.

That’s one of the biggest immediate problems in the U.S.-Saudi relationship.  Over the long term is the hazard of becoming hitched so closely to a leader whose political future, along with the future of his vaunted reform program, is problematic.  Besides the immense political, social, and religious hurdles to that program’s success are serious questions about whether the program is even well-designed and whether its economic goals are realistic.

As a reminder of the hazards of such hitching, let us not forget the shah of Iran.  He, like MbS, was a self-styled modernizer, with his “White Revolution”.  He, too, was an heir rather than a founder of a dynasty founded only in the twentieth century.  He, too, became heavily dependent on the United States.  He also was not anything like Ataturk.

And Ataturk probably never had to lock up his own mother.

Image: A muslim pilgrim visits Mount Al-Noor, where Muslims believe Prophet Mohammad received the first words of the Koran through Gabriel in the Hera cave, in the holy city of Mecca, Saudi Arabia August 28, 2017. REUTERS/Suhaib Salem