Scandal and Foreign Policy: Keep Them Separate, but Don't Ignore Either 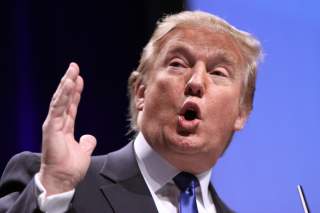 Among Washington’s biggest walking-while-chewing-gum challenges are those that involve trying to make policy soberly and carefully amid headline-grabbing scandal.  We have such a situation today, with the firing of the FBI director being the latest turn in the story of possible connections to Russia of Donald Trump, his entourage, and his election victory.  The problems include not only first-order ones of the media, members of Congress, and administration officials being highly distracted, and how the distraction can distort policy discourse on an important subject such as relations with Russia.  We also are starting to have a second-order problem in which the very awareness of this distraction and distortion leads to overcompensation in which whatever reality underlies the scandal may not get as much attention as it deserves.

It is true that the Trump-Russia matter seems to have generated, most notably among Democrats, some born-again Cold Warriors who are looking askance at any line toward Russia that is not a hard line.  It also is true that any such attitude is not a good starting point for constructing prudent and effective policy toward Russia and toward other foreign policy problems on which Russia is a major player.  But if this is a problem, there has been ample awareness of, and warning about, the problem.  Such warning has come from realists who properly point out the important matters on which Washington and Moscow need to try to cooperate.  From farther to the left, some commentators who have long tended to look askance at any line toward Russia that is a hard line have made similar points in more strident tones.  Amid some of the commentary have been irresponsible and inaccurate accusations of McCarthyism—inaccurate in that, other than having something to do with connections with Moscow, there is no similarity between the libelous innuendo that is actual McCarthyism and a desire to get to the bottom of any connections with Russia involving Donald Trump.  A hazard of even the more responsible commentary along such lines is to downplay how potentially explosive is the subject matter at hand and how important it is to spare no effort to get to the bottom of it.

Distortions can affect not only the policy discourse in Washington but also actual policy of the Trump administration.  This is not, however, simply a matter of Trump being nicer to Moscow than a U.S. president ought to be, because of connections or compromises about which we have yet to learn.  The very prominence of the Trump-Russia story may lead to a form of compensation in which, to avoid raising new suspicions, the administration takes positions that are less cooperative toward Moscow than non-distorted policy analysis would dictate.  The imbroglio may lead to other head-scratching confusion regarding relations with Russia.  We may have gotten a taste of that this week with the odd decision to exclude the U.S. press from Trump’s meeting with Russian foreign minister Sergei Lavrov but to admit a Russian photographer, and so U.S. newspapers ran a photo of a meeting at the White House in which the credit line says “Russian foreign ministry”.

Another sort of distortion might be to try to maintain hard line bona fides (amid unseen reasons for not being quite so hard line toward Russia) by being especially confrontational toward other states such as Iran or China.  Obviously that is not a good starting point for making sound policy toward those other states.

One conclusion of all this: the sooner, and more completely and convincingly, that an investigation uncovers whatever there is to uncover about the whole Russia connections story, the sooner and more completely we can put behind us all the suspicions and policy distortions associated with that story.

Although that story for now consists far more of smoke than of visible fire, there is a lot of smoke.  It includes, among other things, sundry connections with Russia of Trump’s aides, commercial connections of the Trump business, the objectively determined official findings about Russia’s efforts to influence the U.S. presidential election, and Trump’s oddly positive posture toward the Putin regime before Trump even took office.  Not least, the smoke includes Trump’s efforts since taking office to denounce and derail investigation of the matter.  If there were nothing to hide, it would be much more in Trump’s interest for an investigation to press ahead with dispatch and with full powers and to clear up the suspicions and uncertainty as quickly as possible.

We also need to remember the potential great significance if there is anything to hide.  We are talking about subjects as serious as the integrity of the American democratic process and the integrity and loyalty of the chief executive in terms of being beholden to no country but our own.  It is too easy to lose a good sense of relative significance amid politicized spin about what matters most, and amid the tendency in the media to make false equivalences—a tendency encouraged by the issue of James Comey’s conduct and how the FBI has conducted investigations involving each of last year’s presidential nominees.  The potential significance of the investigation involving Trump is orders of magnitude beyond anything involving careless handling of emails.

With the dismissal of Comey, the need for an independent investigation by a special counsel is greater than ever.  Whoever takes over the FBI will be Trump’s appointee and the carrier of baggage associated with the firing of Comey.  In Congress, although there are a few glimpses of responsible bipartisanship on this matter, especially within the Senate intelligence committee, hyper-partisanship still tends to trump everything.  With a few laudable exceptions, members of the president’s own party still seem inclined to overlook almost anything Trump says or does as long as they get whatever they want most from having their own party controlling the presidency, be it tax cuts or conservative judicial appointments or something else.

Getting all this behind us would be good not only for a nothing-to-hide Trump but also for policy toward Russia, U.S. policy toward a lot of other things, and the strength of American democracy.