Sergeant Bergdahl and the Militarization of Counterterrorism 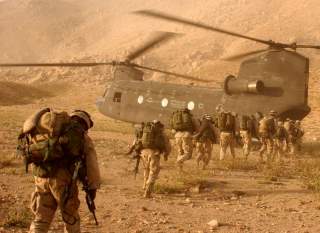 Some of the critics of the trade that is bringing home Sergeant Bowe Bergdahl, in exchange for five Afghan Taliban who had been imprisoned at Guantanamo, appear to have a valid point. Representative Mike Rogers (R-MI), chairman of the House intelligence committee, observes that any trade of captives has the potential for encouraging hostage-taking by demonstrating that hostages have trading value. It is for that reason that “no negotiations with terrorists” has been a core principle of U.S. counterterrorist policy, at least declaratory policy, for many years and through multiple administrations, both Republican and Democratic.

For most of those years U.S. counterterrorist policy in practice did not change much in other respects, either, and relied on a familiar set of tools in an effort to find, foil, and capture terrorists and to punish them appropriately. These included law enforcement resources and a long record of successfully prosecuting and incarcerating terrorists through the criminal justice system. Military force was used selectively and sparingly, mostly to retaliate for acts of state-sponsored terrorism. The sparing nature of the use of force reflected the fact that the terrorist activities that threaten us most, such as plots being hatched in Western cities (or prepared in U.S. flight schools), do not provide many good military targets.

Then a little more than a decade ago an ideological spear was thrust into counterterrorism. A “war on terror” was declared, and distinctions between counterterrorism and warfare, both in concept and in practice, were blurred or obliterated. Anyone who did not accept the obliteration was vulnerable to charges of being a wimp. This ideologically driven change raised multiple problems that continue to handicap us today, including handicapping efforts to reduce terrorism. One particular tool, the military one, was given preeminence with insufficient consideration to how all counterterrorist tools, including this one, have downsides as well as advantages. Our roster of enemies expanded because people became enemies in the course of our using military force. Assiduous efforts by some in Congress to preserve the “war” coloration of counterterrorism led to the erection of unfortunate impediments to the effective implementation of either war or counterterrorism, including resistance to use of the system of justice that has worked well in the past and perpetuation of the image-staining, legality-avoiding detention facility at Guantanamo. It was one of those impediments—a requirement for prior Congressional notification before moving any prisoners from Guantanamo—that the Obama administration decided it had to flout in order not to miss an opportunity to get Bergdahl back.

If you're going to be waging war, then you will need to accept certain conventions and practices that have long been part of warfare. One of those practices is exchanging prisoners. Such exchanges have for centuries been a frequent occurrence between belligerents. The Bergdahl-Taliban trade looks far more like one of those exchanges than like any kind of deal involving terrorist hostages. Bergdahl is, of course, a U.S. soldier who became a captive while on a military deployment in Afghanistan. (The exact explanation for how he got separated from his unit and into Taliban hands is a different question.) The five Taliban who have been released to Qatar reportedly have been involved in some nasty stuff in the Afghan civil war, and they are not men you would want your daughter to come home with, but they are not convicted terrorists who ever plotted to set off bombs in Western cities and are now being sprung from prison in a Western country. They instead are military leaders of a regime or proto-regime engaged in prosecuting that civil war. Like Bergdahl, they are battlefield captives.

The principal appropriate message to those members of Congress and other critics who have indulged in the obliteration of distinctions between war and counterterrorism and who now are finding fault with the Bergdahl deal is: you can't have it both ways. If we're doing war, then we're doing things associated with war, including prisoner exchanges. Whatever heartburn you are feeling now over the deal is one more negative consequence of the conceptual and practical confusion you have fostered.

Making clear that this deal really is an exchange of battlefield captives and nothing at all like springing convicts to free hostages taken in a terrorist operation will help to minimize the risk that Congressman Rogers legitimately highlights. The best way to minimize the risk of additional U.S. soldiers falling into enemy Afghan hands is to get them out of Afghanistan. That is not happening soon, but the president tells us it will happen by the end of 2016.

In the meantime, members of Congress might ask themselves, as they habitually do on some other issues, “What would Israel do?” The Israeli government makes a big deal about not doing business with certain groups it does not like such as Hamas, but when it comes to prisoner exchanges it actually has a long record of extensive dealings. Two and a half years ago Israel struck a deal with Hamas in which in exchange for freeing a single Israeli soldier, Corporal Gilad Shalit, Israel released 1,027 Palestinian prisoners. Israeli officials stated that the released prisoners were collectively responsible for the deaths of 569 Israelis. By that standard, with the Bergdahl trade the United States got a pretty good deal.