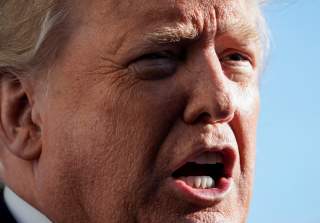 National Security Advisor John Bolton has in effect overruled President Donald Trump’s troop withdrawal decision. This will have fateful consequences for America’s national interests, and none of them are good. Speaking in Israel, Bolton stated that two conditions must be met before a withdrawal of U.S. troops, and the conditions amount to a recipe for indefinitely prolonging the deployment. One is that the United States must “make sure ISIS is defeated and is not able to revive itself and become a threat again”—an objective that is impossible for the two thousand U.S. troops in Syria to achieve. With the mini-state of ISIS largely gone, whatever threat the group poses is a matter not of military control of a patch of Syria—a patch of “sand and death”, as Trump put it—but instead of ideology, politics, fear, and hatred that cannot be described on a battle map.

Bolton’s other condition is to obtain some sort of guarantee from Turkey not to attack the Kurdish forces in northeast Syria that have functioned as clients of the United States but that Ankara sees as auxiliaries of an anti-Turkish terrorist group. Again, this is not a box likely to be checked no matter how long U.S. troops stay in Syria. A U.S. withdrawal would give the Kurds incentive to move in the direction least damaging to their interests: striking a deal with the Assad regime in which the Kurds give up any hope for independence in return for some form of limited autonomy. But as long as the United States keeps promising protection to the Kurds and offers its own troops as a tripwire to guarantee such protection, that incentive is missing. With a continuation of the current arrangement, observes former British ambassador to Syria Peter Ford, the Kurdish militia “will go on infuriating the Turks and the Turkish threat will not go away.” Ford further observes that on behalf of the hawks in the U.S. administration and to guard against the “possibility of receiving yes for an answer” from the Turks regarding a promise not to bash the Kurds, U.S. special envoy on Syria James Jeffrey has the mission of dissuading the Kurds from reaching any accords with the Damascus regime or its Russian allies.

In his initial reaction to the turnabout in U.S. policy, Turkish president Recep Tayyip Erdogan certainly gave no indication of willingness to offer any guarantees. He instead stated in a speech to the Turkish parliament that Bolton had made a “serious mistake” in imposing the condition.

Bolton in effect added a third condition when, speaking at a joint press conference with Israeli prime minister Benjamin Netanyahu, he stated that any withdrawal would have to “ensure the security of Israel and other friends in the region.” So any complaining by Netanyahu’s government will be grounds for not proceeding with the withdrawal.

Expect Bolton and Jeffrey also to resume referring, as they frequently have in the past, to somehow pushing Iran out of Syria as yet another objective of keeping U.S. troops there. This week Sen. Lindsey Graham explicitly mentioned the Iran objective along with fighting ISIS and protecting Kurds as reasons to keep U.S. troops in Syria. This is yet another objective a continued troop presence will not achieve, especially considering how much more important Syria, Iran’s longest standing Arab ally, is to Tehran than it is to the United States.

The de facto reversal of Trump’s withdrawal decision is a victory only for those who—like Bolton, who still avers that the Iraq War was a good idea—never met a U.S. military intervention in the Middle East they didn’t like and never stop seeing regimes they would like to change with force.

The prospective result is an indefinite stay of the U.S. troops, which does not extinguish the ISIS threat and incurs the negative consequences that unwanted foreign occupations tend to incur. Anyone worried about terrorism should be aware that such occupations furnish the prime motivation for suicide bombers. In the Syrian case the U.S. military presence also furnishes propaganda points for the Assad regime, which did not invite the Americans, and for Iran and Russia, both of which it did invite.

Meanwhile, the administration’s approach does nothing to make the United States a more meaningful diplomatic player in shaping the future of Syria. The previous U.S. administration started things in the wrong direction when it excluded Iran from participation in a UN-sponsored peace conference on Syria five years ago, on grounds that Iran would not accept a precondition about creating a transitional Syria government. The Trump administration has gone far beyond its predecessor, of course, in dividing the world into allies or pariahs and refusing to have any dealings with Iran. Today the most meaningful diplomatic action involving Syria is the Astana process involving Iran, Russia, and Turkey.

The episode involving withdrawal and non-withdrawal of U.S. troops in Syria should be a lesson for those who mistakenly placed hopes in Trump for a more restrained and less militaristic U.S. foreign policy. Applause lines on the campaign trail have been mistaken for deeper thought. Behind the candidate’s rhetoric there never was enough strategic sense, necessary knowledge, or even caring about foreign affairs to ward off the maneuvers of a determined hawk like Bolton once he was in position to do damage.