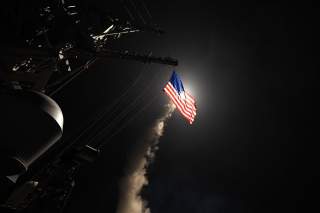 Six years into one of the most complex, many-sided civil wars in modern times, Syria has almost no chance of being made whole any time in the foreseeable future.  The Assad regime, aided by allies, has pushed back from the brink of what many had thought, just a couple of years ago, would be its extinction.  But although the regime is not going to expire, neither can it—despite bravado assertions by President Bashir Assad—recapture the significant amount of territory held by diverse opposition elements.  Syria appears stuck with the variegated map that has become familiar to followers of the war, in which the regime controls the heavily populated western spine of the country, including its largest cities, while assorted others control the remainder.

The interests of the Syrian regime’s most important ally—Russia—are a key determinant of this stalemate.  Russia has succeeded, at a cost acceptable to it, in achieving its objectives of shoring up its only client regime in the Middle East, securing its modest naval and air presence in the country, and demonstrating that it still is a player to be reckoned with in that part of the world.  Moscow has an interest in not having those accomplishments erased.  To try to do more than that, with a sweeping rollback of remaining opposition positions in Syria, would start to entail unacceptable costs to the Russians.  Attempting to own all of Syria, à la Afghanistan in the 1980s, is not in Russia’s interest.

Similar calculations apply to the Assad regime’s other external backer, Iran.  The Iranian-Syrian alliance never was a marriage of love but instead began as a response to the antagonism of their mutual adversary in between: the Iraqi Baathist regime of Saddam Hussein.  Iran’s interests in maintaining a position in this part of the Levant have outlasted Saddam’s regime, but those interests do not imply a need for an ally that controls all of Syria.  As with Russia, the costs needed to sustain more of a rollback of the Syrian opposition would soon become unacceptably high.

From the perspective of the United States, there are no attractive players in this conflict, only degrees of unattractiveness.  There never was any significant liberal democratic opposition in Syria, nor a basis for one.  The notion that chances were lost for developing such an opposition is a myth of hypothetical history.  The real history of many protracted, brutal internal wars demonstrates that the upper hand is gained by those with an appetite for brutality rather than moderation.  As for the external players, besides Russia and Iran those players include regimes that, although they may nominally be friends or allies of the United States, have involved themselves in the Syrian conflict for mostly unlaudable reasons.  These include the sectarian prejudices and tolerance for Sunni extremism of the Saudi regime, and the paranoiac Kurd-bashing inclinations of the Erdoğan government in Turkey.

Recalcitrance that keeps this war going and has so far prevented a negotiated resolution of it is not to be found only on one side of the conflict.  It is a mistake to assert that a key to resolution is to gain leverage over the Assad regime by punishing it further.  Recalcitrance among internal opposition groups has been a match for recalcitrance on the part of the regime.

Nor does whatever can be described as destabilizing behavior exist only in one place, especially the place where discourse in the United States most likes to place it.  Russia and Iran are supporting the incumbent regime—a regime that, counting Hafez as well as Bashir Assad, has been in power for 47 years.  It is other players who have been attempting to upset a longstanding status quo.

Even if clearer identifications of good guys and bad could be made, the intersecting lines of conflict in Syria are so complex that it is almost impossible to pursue one objective without running afoul of another.  The main quandary in this respect right now for the United States involves how to enlist the war-fighting prowess of a Kurdish militia to reduce further the territorial enclave of the so-called Islamic State or ISIS without worsening relations with Turkey, which regards that militia as an arm of an anti-Turkish terrorist group.

Reduction of the ISIS mini-state is where the familiar battle map of Syria is most likely to undergo change in the weeks ahead.  The central focus has been capture of the de facto ISIS capital of Raqqa.  But when—and it’s when, not if—Raqqa falls is less important than what is left behind after it falls.  The importance of a distant territorial enclave to terrorist threats in the West has always been overstated, and ISIS, even before losing Raqqa, already appears to be placing greater emphasis on violent clandestine operations abroad that do not depend on possession of any such enclave.  How much unsettled conflict and chaos is left behind in that part of Syria after Raqqa falls will determine how fertile a field it will be for breeding additional extremism, whether under the ISIS label or some other label.

The makers of U.S. policy should bear in mind how little stake the United States has in specific outcomes in Syria, beyond the concern with exportable extremism and political violence (and they should remember that even ISIS was exported from Iraq, where it was born under a different name as a consequence of the U.S. invasion and occupation).  Avoidance of situations that risk sucking the United States into a larger military clash will be important.  A sample of the risks of such escalation recently occurred when U.S. forces attacked a pro-regime militia, said to be supported by Iran, when it got what the U.S. military regarded as uncomfortably close to an installation that U.S. forces use in southern Syria.

There is no good case for U.S. escalation in Syria.  It would increase the danger of further, unwanted, escalation.  Given the nature of the current stalemate in the main part of the civil war, such escalation would be unlikely to move the needle regarding the shape of an eventual political settlement.  And U.S. interests would be little affected even if the needle did move.

Right now, U.S. policy should focus more on post-Raqqa than on the capture of Raqqa.  The minimization of chaos and conflict in the space vacated by ISIS is partly a matter of carefully shaping military activity on the ground and partly a matter of making full use of the available diplomatic channels, as disjointed as those channels may seem.  The UN-sponsored Geneva process has been unproductive so far in terms of yielding any agreements with lasting effect, but it is the forum where any real peace agreement will have to be signed.  Russia, Turkey, and Iran have had a parallel process at Astana that produced an agreement on “de-escalation zones,” which left many unanswered questions, especially regarding the posture of the internal Syrian opposition toward such zones.  But it is worthwhile for the United States to explore, as it may already be doing with the Russians, how this plan might be used as a basis for further de-escalation.

The United States should accept a fractured Syria for an indefinite future.  Frozen conflicts aren’t always bad, and in this case frozen would be better than unfrozen.  Such a preliminary outcome could bring some relief from the suffering in Syria without the parties having to relinquish formally their farther-reaching aspirations.  It also could be a way station to an eventual settlement that involves a highly decentralized Syria in which different communities would feel more confident about controlling their own affairs.

Meanwhile the Trump administration needs to discard its penchant for regarding every outcome in terms of wins and losses.  So regarded, when you have a no-win situation such as Syria, that means the only possible outcome is a loss.  And even when parties we don’t like suffer a loss, that does not necessarily help U.S. interests.