The Arguments Change, but the Effort to Kill the Iran Nuclear Agreement Continues 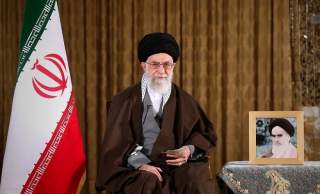 The one-year anniversary of the Iran nuclear agreement, known formally as the Joint Comprehensive Plan of Action (JCPOA), is naturally an occasion for stock-taking, as such anniversaries commonly are. Much spinning is mixed in with the stock-taking, and it is worthwhile to take stock of the spinning as well as of the reality that is relevant to the agreement.

The most obvious and noteworthy part of the reality is that Iran has fully observed the extensive, very limiting and intrusive, provisions of the agreement regarding its nuclear program. The Iranian record of compliance actually extends back significantly longer than a year. Before the Joint Comprehensive Plan of Action there was a preliminary agreement, the Joint Plan of Action, which came into effect in January 2014 and included most of the limitations on Iran that also would enter into the later agreement. Iran now has been in compliance for two and a half years with stringent restrictions on its nuclear program agreed to in multilateral negotiations.

Despite this record of compliance, efforts to destroy the agreement continue. Those efforts demonstrate that most opposition to the agreement has not been motivated by the ostensible reasons, and most of the actual reasons are not ones that would be satisfied or negated no matter how well and how long Iran conforms with its obligations. It always was obvious that the agreement would be superior to the alternative of no agreement in assuring that the Iranian nuclear program stays peaceful. The main motivations for opposition to the agreement have had nothing to do with nuclear nonproliferation and instead have to do with not wanting to have any agreement of any sort with Iran.

That opposition has centered in two overlapping places. One is Republican determination not to let Barack Obama have a major foreign policy success. The other is the objective of the right-wing Israeli government—with everything such an objective customarily implies regarding domestic U.S. politics—to keep Iran permanently ostracized and not to have anyone (especially the United States) do any business with it, and thereby to keep Iran forever as a bête noire that is portrayed as the “real” source of trouble in the Middle East, to continue to use it as a distraction from any other troubles the Israeli government prefers not to talk about, to make sure there will be no competition to Israel as supposedly the only reliable U.S. partner in the Middle East, and to keep a major regional competitor to Israel weak and isolated.

The talking points of opponents of the agreement have shifted as their earlier arguments have become less tenable. We used to hear a lot more about a danger of Iranian cheating. That line of argument has become less credible as the highly intrusive international inspection procedures that the agreement itself put into place have been working as they were supposed to work and have confirmed Iranian compliance. So we don't hear so much about cheating anymore. Arguments that we do still hear under that heading tend to be patently weak. For example, in one of a series of anniversary pieces by the anti-agreement Washington Institute for Near East Policy, Simon Henderson suggests we should worry because “some analysts fear” that Iran may have technical cooperation with North Korea and Pakistan, whose uranium enrichment centrifuges are similar to the ones Iran uses. So what? Iran already has the technology, and no matter where the technology may have originated, this doesn't affect the inability of Iran to exceed any agreed limitations on uranium enrichment when its facilities are crawling with international inspectors.

The entire nuclear side of the issue—even though the specter of an Iranian nuclear weapon was the big supposed threat that those wanting to keep Iran isolated had been exclaiming about, more than any other issue, for years—has come to play a much reduced role in the talking points of opponents of the agreement, as it became obvious how the agreement was superior to the alternative regarding nuclear nonproliferation. We should remember—and note how far things have come in the interim—Benjamin Netanyahu's display of a cartoon bomb before the United Nations General Assembly. Even the preliminary agreement drained Netanyahu's bomb, and the JCPOA has cemented the limitations and inspection procedures that will keep it drained. That reality underlies the support for the agreement among Israeli security officials.

Even before the JCPOA was adopted and implemented, opponents of the agreement had shifted much of their rhetorical energy to the notion that the agreement would somehow encourage more “nefarious,” destabilizing Iranian activity in the Middle East. This whole line of argument never was grounded in the reality of exactly what Iran has been doing in the Middle East, how that activity resembles or differs from what other powers have been doing, and how what it has been doing relates to U.S. interests. A further part of the opposition argument was that relief from economic sanctions would provide a “windfall” to Iran to finance more of the nefarious activity. That part of the argument also was erroneous, not only in involving faulty assertions about the amounts of frozen assets not already spoken for but also in relying on the invalid idea that Iran determines its regional policies according to how much money it has in its bank account.

Faulty or not, the argument about a financial windfall has run into the fact that so far Iran has gotten much less financial and economic benefit than it hoped and anticipated it would—a fact that hardliners in Iran who oppose the agreement are emphasizing. This development about the meager financial benefits has led American opponents of the agreement to shift their tactics again. They see this as an opening for killing the agreement; if the Iranians get fed up enough with not getting any significant benefit in return for all the restrictions placed on their nuclear program, they might just renounce the whole bargain—which for American opponents would have the extra advantage of being able to blame a breakdown of the agreement on the Iranians. The American opponents are thus concentrating on opposing any action that would encourage the kind of economic and financial activity involving Iran that was envisioned under the JCPOA. Opponents are playing up the idea that the sources of Iran's economic problems are to be found in domestic deficiencies in the Iranian economy and playing down what is in fact a big reason for the meager nature of economic benefit to Iran so far: that international banks are frightened of inadvertently stepping across a line in the complicated U.S. sanctions system or of being whipsawed by any U.S. reneging on the nuclear agreement by a new administration or by Congress, and therefore are not engaging in commercial activity with Iran that they are permitted to conduct under the sanctions relief provided for in the JCPOA. Opponents of the agreement say: no, no, what Iran is getting right now is all that it is entitled to get, and any effort to grease the international banking wheels would go beyond what is required by the agreement. Note the contradiction with earlier opposition arguments: earlier the contention was that the JCPOA would provide a financial windfall to Iran; now the argument is that under the terms of the agreement Iran is not entitled to any such windfall, or even to benefits much less than what could be considered a windfall.

There still are plenty of opposition references to “nefarious” region-wide Iranian activity, but such rhetoric is not tied to the earlier idea of a financial windfall. Instead the rhetoric replies on a now-habitual recitation of the mantra of Iran doing all sorts of bad things in the region, along with a general distaste for doing any business with any regime that does bad things. An example is a recent piece by the Washington Institute's Mathew Levitt. Levitt's item is titled, “Under cover of nuclear deal, Iran foments regional instability”. But look at the text and you will see that there is no connection whatever, either logical or empirical, drawn between the nuclear agreement and any Iranian actions in the region. Look at the text more closely and see that the part of the title that singles out Iran for fomenting regional instability isn't supported either. A reference to Bahrain, for example, takes at face value an assertion by the Bahraini information minister (hardly an unbiased source) that because explosives used in an attack on regime forces were “very similar” to ones that earlier and allegedly had “come from Iran,” then Iran must be responsible for all such troubles. A reference to Iranian aid to the Houthis in Yemen makes no mention of the fact that the Saudi intervention on the other side of that civil war is far more destructive and more responsible for escalating that conflict and for intensifying the sectarian animosities involved than anything Iran has done. A reference to Syria does not note that the Iranian activity that supposedly is “fomenting instability” consists of support for an incumbent regime that has been in power for decades. And a reference to Iraq fails to mention that in the biggest part of the conflict there—the fight against ISIS—Iran is on the same side as the United States.