The Cold War Mindset and Counterterrorism 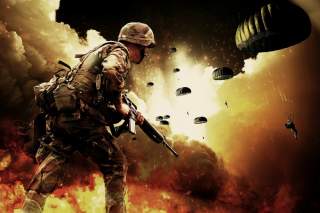 Much of Donald Trump's recent speech on terrorism left one to wonder how what he was proposing would differ from current practices he supposedly was criticizing. Working on counterterrorism with other states including Russia, for example, sounds like what the Obama administration is doing now, including discussing with the Russians ways of combating terrorist groups in Syria. And it is hard to see how Trump's “extreme vetting” would differ from the existing and already extensive review process for visa applications.

Other parts of what Trump was proposing were just too vague for us to get a good idea of how they would be supposed to work. This is true of his proposal to suspend immigration from unnamed regions that either—depending on which sentence in the speech one looks at—are “some of the most dangerous and volatile regions of the world that have a history of exporting terrorism” or “where adequate screening cannot take place.” If any such list of regions were broad enough to stop a terrorist group trying to infiltrate operators into the United States, it would be so broad as to end immigration into the United States altogether.

If there was any one theme that tended to unify what was in the speech about terrorism and that distinguishes it clearly from current policy, it was in explicitly invoking comparisons with the hot and cold wars of the twentieth century. In likening current counterterrorism to the Cold War, Trump even added a dose of McCarthyism with his proposal for a “Commission on Radical Islam” that would “expose the networks in our society that support radicalization.”

Setting aside this McCarthyite twist, the overall theme is one that—as with several other aspects of Trump's candidacy—unfortunately manifests destructive attitudes and habits that go well beyond Trump and his campaign, and that were having debilitating effects on policy debates before his campaign even began. We have seen this with references to “World War IV” (the idea being that the Cold War was number III) and “Islamofascism”. The same pattern crops up in numerous other ways. The recent memoir of a former deputy director of the CIA, for example, is grandiosely titled The Great War of Our Time.

Several things are fundamentally wrong with framing counterterrorism this way. One is that this badly misrepresents the nature of the threat from international terrorism in suggesting a foe with a degree of unity and organization comparable to the enemy powers in the twentieth century world wars or to the Soviet Union during the Cold War. If terrorism is what we are worried about, then we need to remember that terrorism is not a foe or an organization or an ideology but instead a tactic used by many different perpetrators with many different ideologies. Even focusing just on the radical Islamist variety of terrorism, there is neither this kind of organizational unity (as indicated by several of the very attacks Trump mentions in his speech, in which the perpetrators had no organizational ties to any larger group) or even ideological unity (as reflected in the Sunni-vs.-Shia conflicts that dominate much of the current strife in the Middle East).

The framing of current counterterrorism as some kind of great war also grossly overstates the overall seriousness of the threat. Nothing the United States is combating today is comparable to the challenges that were posed by—quoting from the comparison made in Trump's speech—“Fascism, Nazism, and Communism”. The Axis powers in World War II not only threatened to, but did, overrun major portions of the globe. The USSR of the Cold War was a superpower. All of this is way out of the league of anything that comes under the label of radical Islam today. Overstating of the threat does a major part of the terrorists' job for them by making people more scared than they ought to be.

To the extent that there are organizational manifestations of radical Islam in the form of groups such as al-Qaeda and ISIS, the “great war” kind of framing does another part of the terrorists' job for them. A grand, religiously defined struggle between a U.S.-led West and a Muslim adversary such as one of those groups is exactly the way such groups want to depict world politics. It elevates their stature beyond what it otherwise would be and enables them to appeal more effectively to a religiously defined constituency that otherwise would have little sympathy for their methods.

The heavy emphasis on a religious definition of the adversary in this postulated “war” makes many members of that constituency more receptive to such appeals and more inclined to see the United States as their enemy. Particularly stupid is the insistence on “naming” Islamic terrorism. Not only President Obama but also President George W. Bush understood that such “naming” has nothing to do with understanding threats and instead only alienates more Muslims.

The Cold War mindset that is involved here wasn't even an entirely appropriate way of looking at the Cold War itself. It saw global communism as more monolithic than it really was, a misconception that led to such misdirections as the Vietnam War. But at least there really was a USSR, which was a nuclear power and had a global policy of expanding its influence. Applying the mindset to current policy challenges is even less appropriate than it was during the Cold War. And it's not only Donald Trump we have to blame for corruption of public thinking about such challenges.

Image: A soldier in war. Design by Pixelman, at Pixabay. Public domain.