The Complicated War in Yemen 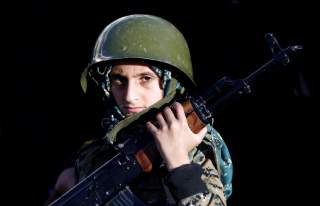 No matter how much some in the United States try to apply to the war in Yemen a Manichean template for seeing the conflict as a simple contest between good guys and bad guys, the complexities of the war keep intruding.  Long overlooked has been how the supposedly good side—that is, the one on behalf of which Saudi Arabia and the United Arab Emirates have intervened—has been where some genuinely bad guys belonging to al-Qaeda have resided.  Similarly overlooked is how the Houthi movement seen as the bad side—because the Houthis have accepted some Iranian aid—has been among al-Qaeda’s staunchest opponents in Yemen.  Lest we forget, the Yemeni-based al-Qaeda branch is the wing of the organization that has come closest to inflicting post-9/11 damage on the United States.

The civil war line-up got more complicated a few weeks ago when there was a falling out between the Houthis and allied forces associated with former president Ali Abdullah Saleh, leading to Saleh’s death in December.  Even more inconvenient for the Manicheans has been a big new split among forces the Saudis and Emiratis—and thus indirectly the United States—have been backing.  Southerners have seized control of Aden, the principal city and port in the south.  This represents a break between them and the titular president who lives in exile in Riyadh, Abdrabbuh Mansur Hadi.  The move harks back to the south’s previous independent existence as a Marxist, Soviet-supported state.  Many Southerners have never been satisfied with the unification of Yemen in 1990, which they see as having led to northern domination.  The new split is also in effect a split between Saudi Arabia, which has the strongest ties with Hadi, and the UAE, which has been more interested in backing the Aden-based southerners.

Actually, the line-up is even more complicated than that, so much so that even a re-division of Yemen along the old international boundary, although that might help to ameliorate some of the biggest divisions of the war, would be no guarantee of unity on either side of the line.  Warlords scattered through the south are opposed to taking direction even from Aden.  It is hard to keep the players in the war line-up straight, even with a scorecard.

Despite this head-swimming complexity, the latest splits should not have been surprising.  The most important thing for the non-specialist to keep in mind is that the disputes underlying this war were originally and fundamentally very local, even though the later Saudi military intervention, in which death to civilians from the air has become a regular occurrence, has turned the conflict into a humanitarian catastrophe.  The American obsession over Iran, which has become ever narrower and hardline under the Trump administration, represents a failure to understand this.  The Houthi rebellion originally broke out for reasons that had nothing to do with Iran but instead concerned discontent among northern tribes over how the central government treated their interests.  The Houthis captured the capital Sanaa against the advice of Tehran.

A lesson is that to define the U.S. approach toward the Middle East, as the current administration does, narrowly and overwhelming in terms of countering Iranian influence is a prescription not only for failing to curb that influence but also for getting mired in local conflicts in which the United States has no stake.  The U.S. posture can even create new conflicts that become major headaches for U.S. foreign policy, as is true of how the U.S. posture in Syria has made a mess of relations with Turkey.  In Yemen, the problem is not only an erroneous conception of whom the United States is opposing there but also no clear idea of exactly whom or what it is supporting.  With the forces backed respectively by Saudi Arabia and the UAE going separate ways, on whose side is the United States now?  The lack of a good answer to that question is another reason, in addition to the lack of a conscionable basis for supporting the devastating air war against Yemen, for not taking sides at all.

Image: A girl holds a rifle as she attends a gathering held by women loyal to the Houthi movement to show their support in Sanaa, Yemen January 14, 2018. REUTERS/Khaled Abdullah