The Damaging Decline of HPSCI 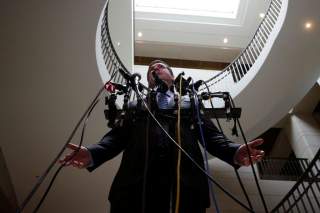 The most frequent and regular interaction that I, as a then-serving intelligence officer, had with the House Permanent Select Committee on Intelligence (HPSCI—referred to orally as “hip-see”) was in the 1980s.  Part of my duties involved preparation of weekly classified briefings, presented to the committee by a senior CIA official, on current developments in world hot spots.  The briefings aided the committee’s discharge of its responsibilities not only as an overseer of intelligence but as a consumer of it, and as an interface between the world of classified intelligence and the rest of the House membership.

The committee at that time took those roles seriously.  To the extent I could tell based on observation from the other side of a hearing room and on meetings between the committee leadership and my bosses, a positive spirit of bipartisanship prevailed.  The committee leaders at the time were Democrat Louis Stokes of Ohio and Republican Henry Hyde of Illinois (who later would chair the House Committee on the Judiciary—from which seat he would lead the impeachment of Bill Clinton—and the Committee on International Relations).  Another prominent Republican member of HPSCI back then was Richard Cheney of Wyoming.

The intelligence committees of both the House and the Senate have been, since their post-scandal creation in the 1970s, important parts of assuring that U.S. intelligence agencies conduct their operations in a manner consistent with the values of the American people.  Much of those operations necessarily must remain secret and thus cannot be exposed directly to the people, and so the members of the intelligence committees function as the people’s surrogates.  The agencies have recognized not only the importance of oversight in a democracy but also how their own existence is easier with a cooperative relationship with their oversight committees than it would be without such a relationship.  Thus the agencies have usually been just as protective of the committees’ prerogatives (such as when other congressional components have tried to butt in on intelligence matters) as the committees themselves have been.  An important ingredient in building a cooperative relationship has been the committees’ record in protecting classified information, which up to now has been good.

In subsequent years the intensified partisanship that has infected everything else in Congress, especially since the Gingrich revolution in the 1990s, has affected both intelligence committees as well.  In recent times the infection has been worse in HPSCI than in the Senate Select Committee on Intelligence.  Most recently the problems in HPSCI have centered on the activities of committee chairman Devin Nunes (R-CA).  Nunes once recused himself from anything having to do with investigations into Russia’s relationship with the Trump campaign, after it came to light that Nunes had been functioning as a messenger for the White House on the matter.  But he and others now seem to have forgotten that recusal.

HPSCI has become enmeshed in the congressional Republican effort to denigrate the FBI and Robert Mueller’s investigation into the Russia matter.  That effort obviously is being waged to distract attention from the subject of the investigation and to discredit preemptively any findings unfavorable to the Republican in the White House.  The denigration campaign raises huge issues of the priorities of those waging the campaign, of the seriousness of whatever will be the findings that they hope to discredit, and not least of how a partisan attack on the premier national law enforcement agency will affect the ability of that agency to perform its duties in the future with its morale, integrity, and nonpartisanship intact.

Nunes has had committee staff write a memo that reportedly is a partisan spin on still-classified information about the Russia investigation, and has been pushing to make the memo public.  According to press reports about the memo's contents, the paper centers on surveillance of former Trump campaign official Carter Page.  The memo contends that the surveillance was initiated based on Democrat-funded research that led to the famous “dossier” compiled by former British intelligence officer Christopher Steele, and that this origin shows political bias in the work of the FBI.  If that in fact is the argument, it is a feeble attempt at discrediting.  The source of a tip or suspicion is, of course, not at all the same as whether there is a basis for pursuing an investigation that is legally sound and justified on the basis of national security.  Reportedly the surveillance in this case was of the type governed by the Foreign Intelligence Surveillance Act (FISA), which includes strict and extensive procedures for review and approval.  The requirements would have included a determination by a judge in the FISA court that there was probable cause to believe that Page was up to something with the Russians.

Release of Nunes’s memo by the committee would be a highly irregular disclosure of classified information, even if in slanted and summary form, for partisan purposes. (Committee Democrats have prepared their own memo as a rebuttal, but the Republican majority on the committee voted down its release even as they were voting in favor of releasing their own memo.)  The procedure is so irregular that the Department of Justice has sent a letter to Nunes declaring that release of the memo without any review by the FBI and intelligence agencies would be “extraordinarily reckless”.  Release of the memo is now up to the White House.

Among all the other damaging effects of this escapade is that it a may drive a final politicized nail into the coffin of effective oversight of intelligence, at least on the House of Representatives side of Capitol Hill.  If this is how a committee majority is to conduct business, and how it is to handle classified information, then neither the American people nor the FBI or other national security agencies have reason any more to believe that effective oversight by this committee is possible.

An irony is that amid all the rhetoric about a deep state and supposed abuses within security agencies, Nunes and company are killing the most effective mechanism that American democracy has for ensuring that such a deep state does not arise and that such abuses do not occur.